Nothing Beats Mom's Cooking, Except, Maybe, a Robot?

Pune-born Pranoti Nagarkar, 37, read books about inventors and their innovations growing up, and the idea of creating something novel, useful and from scratch stuck with her.

In college, Nagarkar made an automatic clothes ironing device, winning several accolades for it, and eventually went on to work at another startup in Singapore.

But her breakthrough idea came after she got married and realised - as some young Indians do when they become adults - that roti (Indian flatbread) is an incredibly difficult thing to make.

“I was a working professional in Singapore at the time. The commute to work and back used to kill me, but I was newly married back then and I wanted to cook healthy food for my family,” narrates Nagarkar.

“One of the healthiest things in an Asian kitchen is the roti, but making it is hard work!,” she adds.

So, in 2008, Nagarkar decided to put all the elbow grease that goes into making a roti, to fulfill her childhood dream of becoming an inventor, launching Rotimatic, an automatic roti maker that does everything from kneading the dough, and compacting it into a ball, to flattening it and cooking it consistently every time.

The machine is designed to emulate human actions, such as adjusting the dough-to-water ratio, making sure the rotis are the same thickness and using different customisations for different kinds of flour, using artificial intelligence. 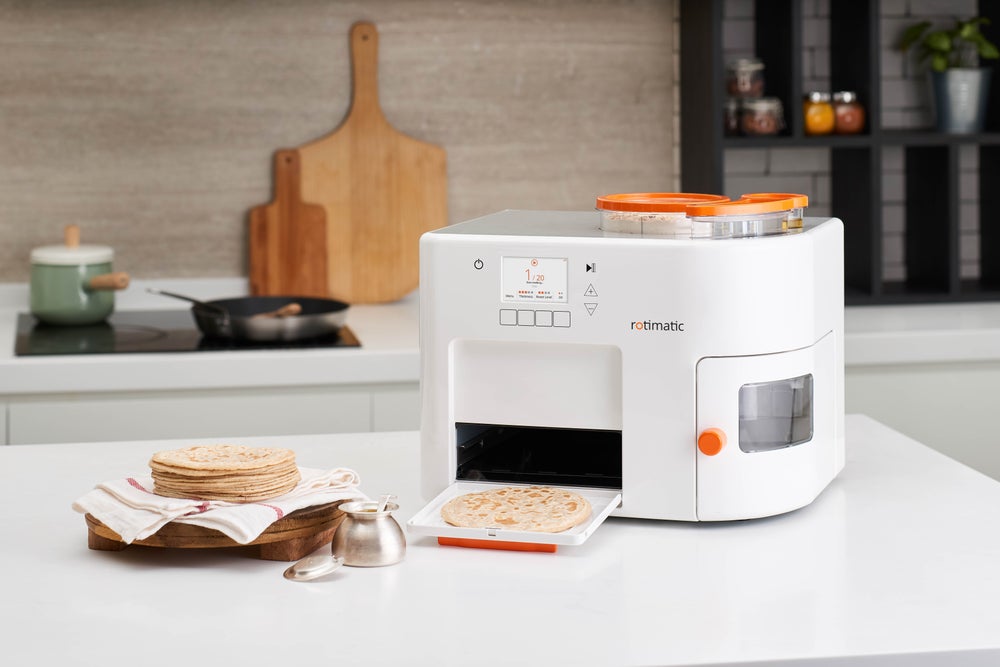 Till date, Rotimatic has churned out over 75 million rotis, as per the live counter on the company’s website. The company, Zimplistic, has sold over 60,000 devices across 20 countries, including Singapore, and the U.S., currently its biggest, and has raised a total of $48.5 million over four funding rounds, from investors including Credence Partners , Bosch, and EDBI, as per data aggregator Crunchbase.

The company is currently working on its plan to expand into India, Nagarkar tells us, which should be by at least the third-quarter of 2020.

For India, the product has to go through some changes - major and minor - first.

“India has very specific needs, such as electricity issues, and after-sales servicing, and the device needs to be modified to fit into the Indian kitchen,” says Nagarkar.

The Indian version of the Rotimatic could see a grain grinder attachment, which the current model does not have, along with gluten-free customisation options, both of which are in testing mode right now.

Price-point is also an issue the company is trying to address. Currently, Rotimatic retails for $999, or 70,755 rupees, excluding shipping and local taxes.

“India is a price-sensitive country, and we want to make the device affordable for as many people as we can. We’re considering our manufacturing processes and evaluating what would best help us bring the price point down for Indian consumers,” Nagarkar says.

“Eventually, we don’t want to be stationed in Singapore forever, so we’re also looking to new markets from that perspective,” she adds.

The company has not turned profitable yet, but it expects the India launch to boost its bottomline.

“We don’t have economies of scale production at the moment, but our entry into the Indian markets could change that,” Nagarkar says, adding the company is looking for partnerships to boost sales, which, as of now, only happen through its website.

Autonomous Kitchens and the People They Serve

Kitchen appliances burst onto the scene after the American civil war ended, and the mid-to-late 1800s saw the invention of machines still found in most of our homes, like the electric mixer.

Up until the last decade, kitchen appliances continued to become more and more sophisticated, but they truly turned “smart” only very recently, with the advent of remote controlling features, high speed internet, and now, artificial intelligence.

The smart kitchen appliances market is growing rapidly today. By 2025, the market is expected to hit $4.85 billion, at an annual growth rate of 27.4 per cent, from $890 million in 2018, according to a study conducted by Market Study Report Llc.

By far, smart kitchen appliances have had the most impact on consumer kitchens in the form of food assembly robots, for example, that work to make large-scale processes more efficient and cost-effective. The commercial food industry has also embraced autonomous kitchens because of the spurt in online food ordering.

Robots like the Rotimatic, and Suvie, on the other hand, serve to upgrade personal home kitchens, even though they are single-function appliances, and have reported sales growing slowly, but steadily.

“Autonomous personal kitchens are the future of food-tech. More and more people are realising they want healthy, home-cooked meals, even when they’re busy and have no time. That’s where we can make a difference,” Nagarkar says.