India is moving towards a shared economy thereby reducing the need for owning assets. With  deeper penetration of technology and Internet, products ranging from real estate to vehicles, from electrical appliances to clothes can now be rented easily using a smartphone. The shared real estate business is however experiencing massive growth owing to changing demographics, proliferating entrepreneurship, digitisation and millennial demand.

“Coliving, student housing and senior living are the next evolutionary step in the residential real estate domain, while coworking has evolved from traditional office real estate. The drivers behind this evolution are changing social dynamics, a highly enabled start-up environment, rising interest in higher education by migratory student population, and the need for quality housing solutions for senior citizens," said Anuj Puri, chairman of ANAROCK Group.

The report also revealed that the senior living segment in India has immense potential because life expectancy here has improved to 68.8 years in 2018.

For the uninitiated, coworking refers to shared workspaces between multiple companies that prefer to be present within a cross-cultural environment. The idea of co-working is not new in India but it gained popularity in recent years with the boom in the startup ecosystem.

The ANAROCK report also revealed that the plug-n-play nature of co-working spaces is one of the major factors behind its popularity.  Coworking spaces allow companies to rent an office or just a desk and start focusing on work. It helps in providing basic infrastructure including workstations, conference rooms, internet connectivity, housekeeping, pantry services, etc.

Earlier while speaking with Entrepreneur India during the Startup Summit 2019 organised by Franchise India, OYO-owned Innov8 founder and CEO, Dr Ritesh Malik had said, “Co-working had made the most amazing impact on start-ups. In my first start-up, I spent 35 per cent of my seed capital in security deposit to landlord, fees to the architect and building my office. With co-working spaces, you need to just plug and play.”

With using co-working spaces, startups can efficiently use their capital for scaling operations rather than investing it on real estate and furniture. Not only small-sized companies but corporations such as Paytm, Zomato, Microsoft and Twitter are also availing co-working spaces.

Apart from Innov8, other players such as Awfis, CoWrks, 91SPRINGBOARD, and Smartworks dominate the co-working space.

Co-living is increasingly gaining popularity among the young population who change cities for education and work purposes. According to the report, The top 6 coliving players in India currently have 1.18 lakh beds priced between INR 6,000-30,000 per month. 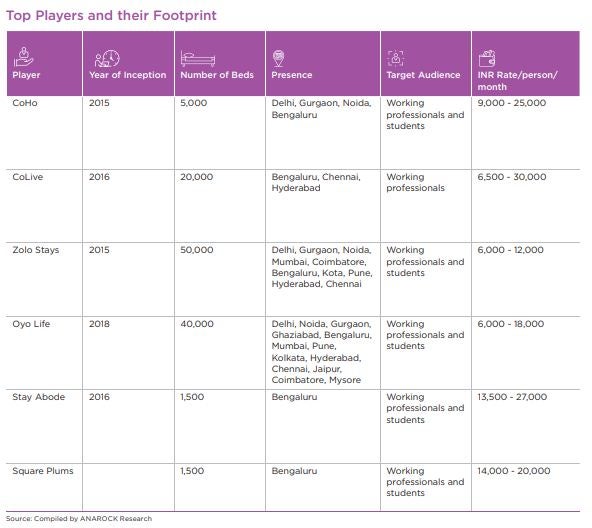 Co-living has high demand because it has enabled millennials to live in newly-furnished spaces with a range of amenities at an affordable cost. Earlier while speaking with Entrepreneur India, Rohit Kapoor, chief executive officer of new real estate businesses in hospitality unicorn OYO explained that finding a suitable place to stay in an unknown city is not easy as one needs to decide on a suitable location, transact with landlords and brokers and also arrange for high security deposits.

“It is even more difficult when people are moving to a new town for a short-term project or looking for weekday accommodations to avoid the daily commute. This is where the concept of co-living solutions are attracting customers, especially students and the young workforce,” Kapoor added.

One of the major advantages of opting for a co-living spaces as opposed to paying guests or hostels is that it significantly reduced the cost of living because tenants share the rent however also get to enjoy add on services such as daily housekeeping, laundry, on-call resident facility management, daily meals, among others.

Future Of Retail Is Omnichannel