Reflections On Being An Environmentally Conscious Startup At An Entrepreneurial Event

By Safi Roshdy March 5, 2020
Opinions expressed by Entrepreneur contributors are their own.
You're reading Entrepreneur Middle East, an international franchise of Entrepreneur Media.

I liked April from the 1987-1996 version of the Teenage Mutant Ninja Turtles cartoon series, but I never really gave much thought to wanting to be like her when I was a kid. I picked Raphael as my favorite (red was my favorite color) when I role-played with my little brother, and he picked Michelangelo. I now apparently dress like April -as seen in the picture above- but instead of the portable video camera like the intrepid journalist in the cartoon, I am armed with a cell phone.

I bought the yellow coverall while I was online shopping in the US; it was on sale. It is definitely not a wardrobe staple, and I do not think there was any reason for me to buy it beyond the "I'll take it" factor. Like many people, I find myself guilty of buying things I happen to like, rather than need. And there it was in my closet waiting to be worn when, one day, as I was getting ready to go on a beach cleanup, I decided to wear it. I've been wearing it to most of our beach cleanups since then, and now, to a number of events, including the recent STEP Conference in Dubai, UAE, where I was asked to pose for the picture above.

We at ahlanwasahlan approached STEP Group last year about wanting to do something about the waste generated by the annual event, and the team there was cool enough to take us up on our offer. We had an initial meeting to look at what was practical to do at the moment, and what can be done later. Having a little bit of an event production background myself, I understood how it was very difficult for any event organizer to do things very differently from the way they have always been done. For one thing, it is less costly and more predictable to go for what is conventional. Nonetheless, we were invited on board, and on a month's notice, we trialed an activation with them at their newly launched STEP Next initiative.

At the conclusion of STEP Next, we also got to meet one of their contractors for the setup, a very nice man, who sympathized with our interest in diverting event waste from landfill, and even shared with us how, at his workshop, he had made upcycled keepsakes from waste material. But he noted that customers expressed little interest in buying them, and that they would always prefer the look and feel of brand new items. Our own "keepsakes" from STEP Next were printed styrofoam boards that we knew would end up in landfill, used lanyards and badges, and a battered old printer they had made available for destruction, in addition to the sorted items that made it into our improvised and repurposed bins.

Diversion from landfill is no piece of cake. There is simply too much trash being generated on a daily basis for any of the existing systems to be able to handle efficiently, and there is simply too much trash that no one wants to -or can conveniently- handle, store, or sell. If landfills didn't exist, we would be forced to reconcile with this reality, but landfills and poorer countries willing to take our trash for money do exist. With that said, did our presence at the STEP events make a difference, and, also, how could we have contributed more to managing waste at the event? Before we get to that, we need to make sure we are on the same page:

Taking this into account, you have to understand that we find it very difficult to go about our daily lives, pretending everything is alright. And yet, it may be that we are able to think about this problem only because we are blessed to be sheltered from the direct ramifications of any of the existing world problems (except maybe the economic), including wars, and because we have learnt as contemporaries of this world to live our lives without thinking much about the death and destruction that is taking place contemporaneously.

Now, back to the question: the short answer to its first part is: if you were there, we made you look. If you have been attending STEP, you might have noticed that, compared to last year, there was no free bottled water on offer this year, except for the water available to the event speakers and staff, and that which was provided at the Floating Pitch competition run by in5. As such, we at ahlanwasahlan.org provided filtered water to those who brought their own reusable water bottles or cups. We also almost got around to providing the same for the staff and speakers, but the plan could only materialize two days before the event, and the organizers had already bought the single-use plastic bottles by then, and so, this was not something they were able to take on by that point in time.

Here's one startup that I personally feel is showing some enthusiasm here at @stepconference: the environmentally minded @ahlanevents! More power to you. Check them out: https://t.co/jN26uXvlQf #STEP2020 #Dubai #UAE #startups #entrepreneurs pic.twitter.com/ehbKy93quC

Our original plan for STEP 2020 was that in addition to providing reusable food containers if needed, signing up participants to our community engagement activities, and to our eco points program, we wanted to engage the participants in understanding what is recyclable and what is not, like we did at STEP Next. Our team worked on upcycled, repurposed collection bags made from discarded shipping bags, old outdoor tent material, biodegradable string, and STEP Next lanyards.

We were also going to be collecting recyclables, and depositing them at the existing Dubai Internet City recyclables collection bins on either end of the event venue. However, we decided against doing the same though on the day of the event, because a different company from the one that manages the venue collection bins was contracted to handle waste management at the event, and for us, it was not ethical to be taking away recyclables from one company, and giving them to another. (It's not common knowledge, but common recyclables like PET bottles and aluminum cans are usually picked out by the waste management companies that collect the trash if it arrives unsorted.) 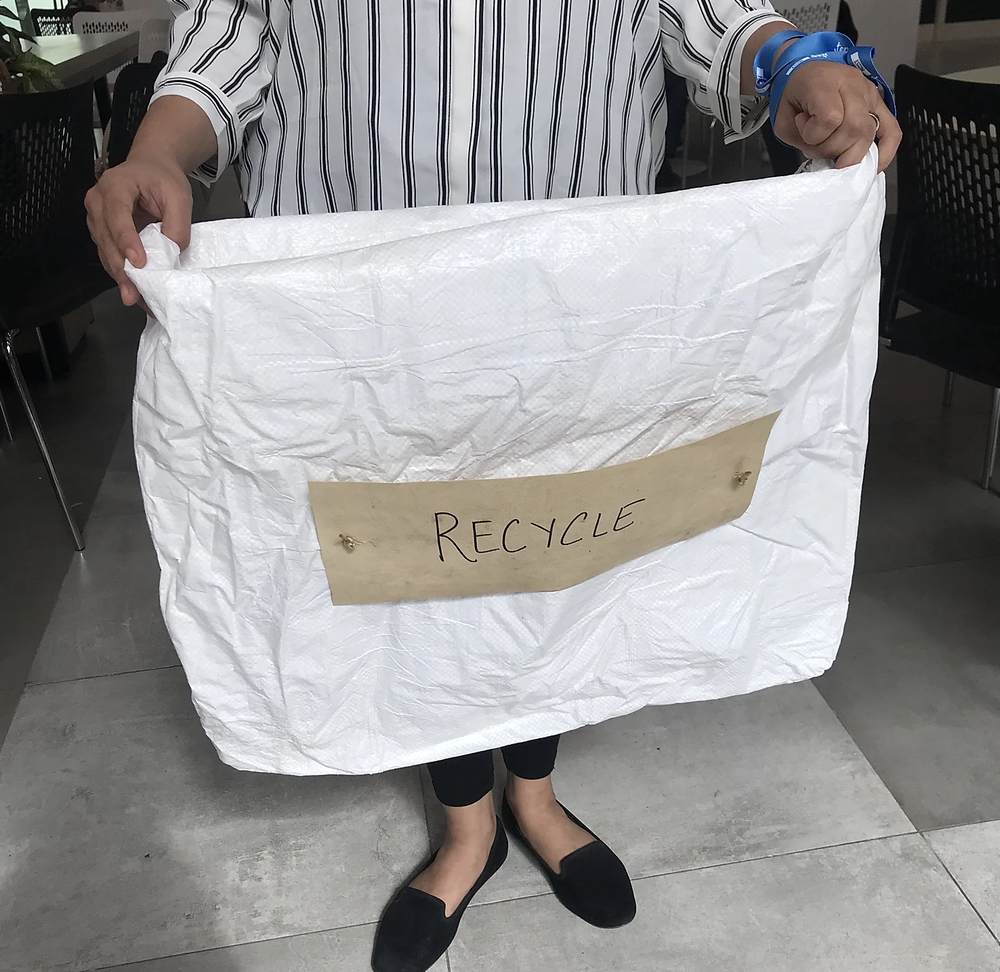 At the event, we also faced waste management competition from an exhibiting company that provides home cleaning services. Like last year, their hired staff, wearing new printed t-shirts and caps, and equipped with brooms, dust pans, and disposable black trash bags, were all over the event grounds advertising the company, and leaving little room for thinking about taking care of one's own trash, unfortunately. The company was also offering free water from a dispenser, along with new and conveniently branded reusable bottles.

Unlike the competition, our team was not paid, and they were free to wear any yellow top they already had (just for the sake of standing out among the crowd). Every one of our team members also brought along their reusable water bottles or a cup. We also did not bring along any disposable napkins or bags, and we chose not to take the lanyards provided with the badges- yes, branded lanyards are a form of disposable plastic. We also made a conscious decision not to have any printed marketing material (most printed handouts and posters are disposable and laminated in plastic to make the oil-based ink stick, and many are event-specific and therefore not reusable; banners and signs are also plastic-vinyl mostly). We instead opted for upcycled cardboards hand-marked with our website address.

Our setup at STEP was not very complicated. We were out for a day in the park. On the second day, we had to take down our reusable dry erase boards from their stands and place them on the grass, because the wind gusts kept knocking them over. We brought our own reusable table, seats that came with integrated storage, a water cooler, water pitchers, a compost bin, and our own umbrella (one that we’ve had for at least 10 years). The table itself was waterproof, and we made sure to stow our things under it when it rained. We also partnered with Just Salad to provide the participants with a reusable option for their food purchases on site. They could then keep the bowl if they chose to, and use it for perks with their purchase at the chain's outlets. Even though the bowls were provided for free, we were very adamant about making sure that whoever took them really wanted to keep them, and we asked them to let us know if they ever wanted to throw the bowls out, so that we can take care of repurposing or recycling them. 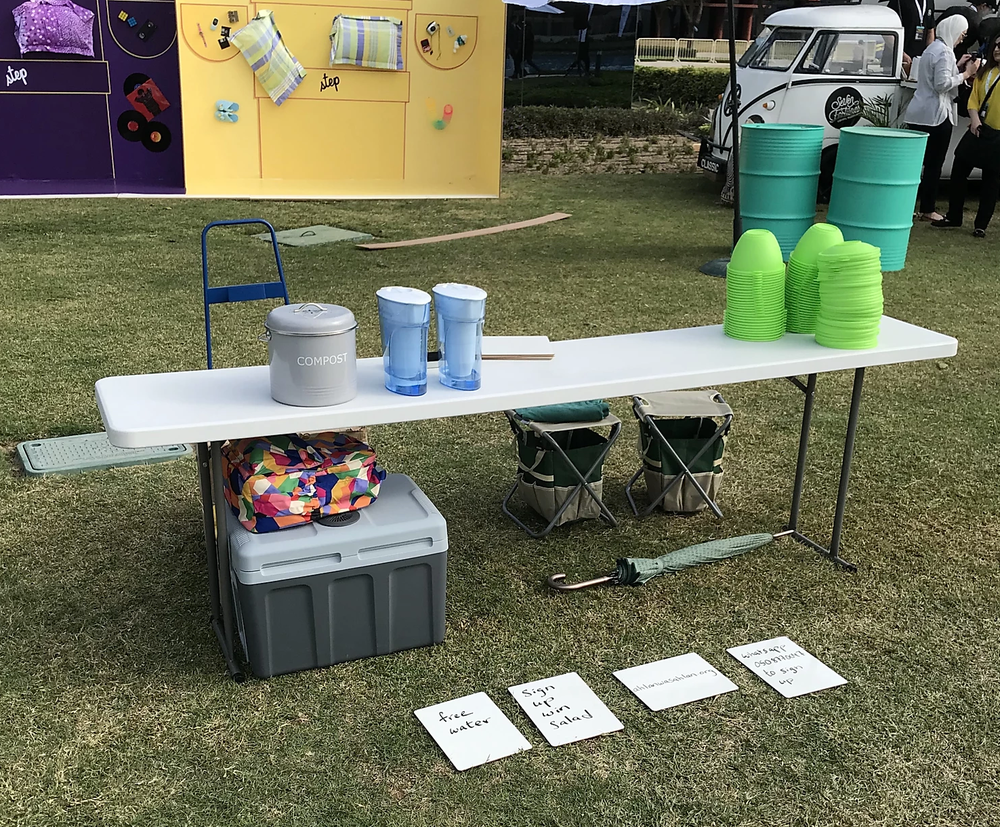 So, as you can probably tell, set-up and take-down for us at the event was very easy, and took very little time. Our table did come from the manufacturer in a clear plastic bag (I am assuming to prevent scratches) and it was, like most other things here, shipped into the country from somewhere else, but now you know what our basic set-up for events looks like, and you can hold us accountable for reusing what we have in order to account for its carbon footprint. To mitigate our carbon footprint, except for the one car we used to transport the setup, the metro was used by all of my team members (except for one person on the second day who had an excuse). Also, we did not need to discard anything on site, so even the plastic bag that came with the table (which is not oxo-biodegradable) was saved for repurposing.

Now, compare our set-up to everyone else's, and how long it took everyone else to build, transport, put it together, and dismantle, and the difference is clear. So much work and money goes into branding, and making stands look a certain way. And if, as a set-up designer, you want to embellish things to stand out, you will probably be using a lot of disposables, or items that come wrapped in disposables. From speaking to a number of contractors for different events, I’ve also learned that a lot of sets are made to look upcycled (to keep up with trends), when, in fact, they are made from scratch. Most of them also arrive to the location wrapped in bubble and cling wrap (which is not recycled either). As an audience, we, of course, only get to experience the glitz and glam, and who cares if a couple of inexpensive water bottles filled with expensive desalinated water are wasted here and there? Because waste is always on my mind, I am no longer able to be wowed by set design: if it's expensive to store, and/or can't be reused, I'm not impressed.

At the end of the day, the real value I got from being at the event came from the people I met. No matter how accessible our lives have become via all the technology at our disposal, real human interaction is priceless. It is easy for that human interaction to get lost in the middle of all the pitching and tech "solutions" on offer, but if you are out there looking for it, you will find it, and I found it. The interactions I had with a number of people at the event made my time, and it could be argued, even the carbon footprint associated with us being there, worthwhile.

Related: To Build A Sustainable Future, Impact Investing Needs To Be Brought Into The Forefron

Safi Roshdy is the founder of ahlanwasahlan think tank llc, and a proponent of human intelligence.