According to a March 2020 LocalCircle survey, 6 per cent businesses believe that there should not be any maternity leave allowance

By Shreya Ganguly March 9, 2020
Opinions expressed by Entrepreneur contributors are their own.
You're reading Entrepreneur India, an international franchise of Entrepreneur Media.

Awareness about women inequality and the glass ceiling has undoubtedly increased with time. Apart from increasing literacy and digitization, strong women leaders who worked their way to success have inspired women to shatter the subconscious biases towards women.

However, with increasing awareness, data shows there are biases against hiring women due to maternity costs. Biases against women workers due to natural process of pregnancy or menstruation is not surprising in India.  According to a March 2020 LocalCircle survey, the new maternity law which mandates six months of paid maternity leave has affected the hiring trends of almost 49 per cent start-ups or SMEs in India in the last 12 months. The survey, based on  8,500 votes from start-ups, SMEs and entrepreneurs, revealed that 33 per cent of the respondents did not hire women at all while 16 per cent hired fewer women than in the previous year.

Apart from this, 6 per cent businesses said there should not be any maternity leave allowance.

The bias against women workers in India is not surprising. A previous 2019 study by the Centre for Monitoring India Economy (CMIE) showed women graduates are more than 3.5 times likely to be unemployed than their male counterparts. The study showed that while overall unemployment in India is 7 per cent, unemployment rate among women is 18 per cent. 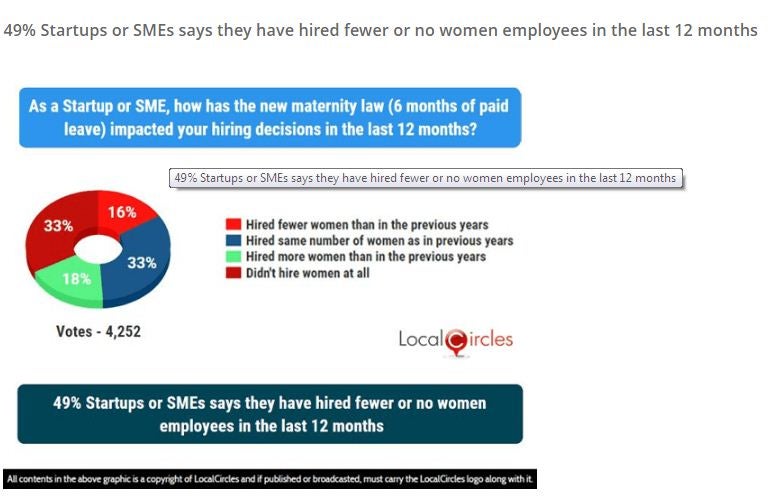 For the uninitiated, Maternity (Amendment) Bill, 2017 had increased the duration of paid maternity leave available from previous 12 weeks to 26 weeks. According to the Maternity Benefit Amendment Act, the benefit can be availed by women for a period extending up to a maximum of eight weeks before the expected delivery date and the remaining time can be availed post childbirth.

However, for women who already have two or more surviving children will be eligible for a paid maternity leave of 12 weeks, meaning six weeks pre and six weeks post expected delivery date.

The amendment, however, received mixed reactions from the start-up ecosystem. According to the LocalCircles survey, while the majority 44 per cent believed that the current law of six month paid leave should be kept unchanged, 6 per cent businesses said there should not be any maternity leave allowance. 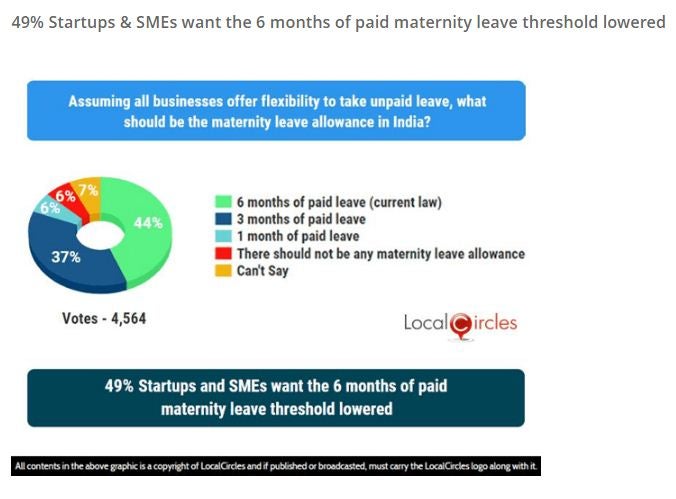 While 37 per cent of respondents said a three-month paid leave should be made available, around 6 per cent believed that one month paid maternity leave is enough for women workers.

Highlighting similar points,  Naiyya Saggi, founder and CEO of BabyChakra came across the bias while raising angel funding round for her start-up. Saggi said during one such meeting with a potential angel investor, she was asked who would be responsible for running the company once she becomes a mother. “I was shocked with the question as my level of ambition was being questioned, but I might not have been questioned if I am contemplating family at any point as a man.”