How a Hockey Player Making Less Than $30,000 a Year Turned His Career Upside Down and Started a Multimillion-Dollar Day Trading Company

Despite playing in some of the best leagues in the world, James Sixsmith was broke. So he started a side hustle to create a life after the game.

April 7, 2020
Opinions expressed by Entrepreneur contributors are their own.

James Sixsmith loved hockey, but in the end, hockey didn’t love him back.

Like many talented players who grind it out as a professional hockey player, he experienced none of the wealth or glamour of professional sports. After three years playing for second tier, AA and top tier, AAA minor-league teams, he was still living with his parents in the off-season and making $28,000 a year. Along the way, he’d collected more than a dozen broken noses.

Feeling pressure to make more money, he opted to play professionally in Europe in 2010. After stints in German and Austrian leagues, Sixsmith logged eight seasons in Scandinavia, mostly for Norway’s Lørenskog team, whose license wasn’t renewed in 2018 because of economic problems. While he loved playing, he knew he didn’t have a long-term future with hockey, let alone in a foreign country where he didn’t speak the language.

“I was a tweener — a good player, but not quite good enough to make it,” admits Sixsmith. “I had these moments where I wondered, ‘What the hell am I going to do for the rest of my life?’”

Sixsmith explains he quit his NHL dreams to ensure he wasn’t poor for the rest of his life. “I was scared, newly married with a kid on the way. The writing was on the wall — I was getting too old for hockey, and once you start playing in Europe, you’re not going back to the NHL.”

At a turning point with no clear path forward, Sixsmith didn’t panic. Throughout his career, he’d grown accustomed to confronting adversity by putting his head down, working hard, and surprising everyone.

‘Who the hell is that guy?’

As a teen, Sixsmith dreamed of playing at Harvard or Yale, but his 5-foot-9-inch, 140-pound stature raised enough doubts to nix any Ivy League scholarship offers. Instead, he headed to Worcester, Mass., and logged ice time for the Holy Cross Crusaders.

After college, he joined the Bridgeport Sound Tigers, the top affiliate of the NHL’s New York Islanders. He spent the next three years ping-ponging mostly between teams affiliated with the Islanders and the Nashville Predators. The need to make more money drove him to Europe to play hockey, with his wife, Grecia, joining him. After playing for a year in Germany and another year in an Austrian league, impending fatherhood further fueled a drive to provide for his growing family.

During his downtime, Sixsmith began dabbling in day trading with his savings — buying and selling stocks in a single trading day. He liked that it gave him the freedom to continue playing hockey, and he found relief knowing he wouldn’t have to move back to the U.S. and start at the bottom of the corporate ladder in his 30s.

Still, just as he did in his school days as an undersized winger, Sixsmith had to prove himself in his new field.

“I did very poorly to start,” he recalls. “I was naïve and didn’t know what I didn’t know.” His inexperience caused him to lose tens of thousands of dollars, but Sixsmith relied on the discipline and responsibility instilled in him by decades of competitive sports.

Instead of spending his free time drinking with teammates or playing video games, he dedicated himself to learning the markets through books and online mentors. Eventually, he turned a corner and started consistently making money. He also began teaching other players. “The guys would see me in front of the screen in the locker room and ask what I was doing,” he remembers. “They labeled me the smart guy, and when any random question would come up, they’d jokingly say, ‘Go ask Sixer. He knows.’”

Take the risk — but keep your day job.

As he continued trading, teaching, and playing, Sixsmith realized two things: First, athletes make great traders. “Grit is the most important attribute of a good trader because the markets will punch you in the face,” he explains. “Athletes have grit, and they don’t quit.” He says regular people can benefit from developing this psychological fortitude before they begin trading — picking up a recreational sport or hard-to-master hobby can do the trick.

Second, he realized retail traders — people who trade with their own money — are hindered by a lack of funding. “Being well capitalized with a sound strategy is the holy grail,” says Sixsmith. “When you’re trading with the rent money, you start to trade emotionally. Fear and greed come in, and you make horrible decisions.”

Sixsmith noticed that many trading academies required newbies to front at least $25,000 of their own capital, almost guaranteeing they’d fail when they lost money and panicked. To teach the intangibles of trading — persistence, self-control, confidence, and humility — he needed to buffer students from the immediate financial risk.

Sixsmith founded Trade Context in 2015 to train new traders and co-founded SpeedUp Trader, a company that allows newbies to trade without risking their own capital. His students begin making simulated trades before jumping into the live market. The funding company absorbs the inevitable losses in a trader’s early days and then splits the profits — which usually come after three to six months. 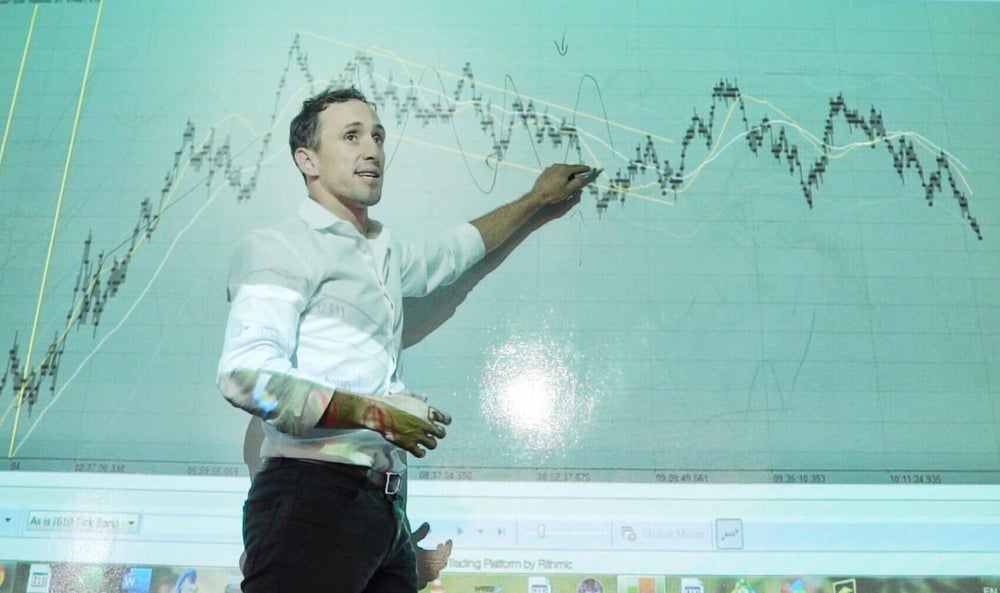 In addition to fronting the capital, Sixsmith’s company distinguishes itself by discouraging students from quitting their day jobs. They preach the same gospel of consistency and hard work that Sixsmith mastered on the ice, urging novices to grow their supplemental income gradually while they acquire more skill. Their students learn to meticulously record their ideas and trades daily to see how emotions affect their decisions.

Without financial pressure, Sixsmith’s students steadily gain confidence and the net worth necessary to lead their dream lives. They learn to analyze the market every morning, make a plan, execute their trades, and let the market do the work.

“The confidence and self-control to walk away from the screen doesn’t come naturally,” says Sixsmith. “Yet when you play the game of probabilities, it doesn’t do any good to stare at the computer and overthink everything. Once you understand how the market works, you can be fairly confident in your predictions.”

Create the life you want.

After retiring from hockey in 2019, Sixsmith and his wife relocated from Europe to Orlando, Florida, with their three children. Instead of buying a mega-mansion, they purchased a comfortable house and installed solar panels. 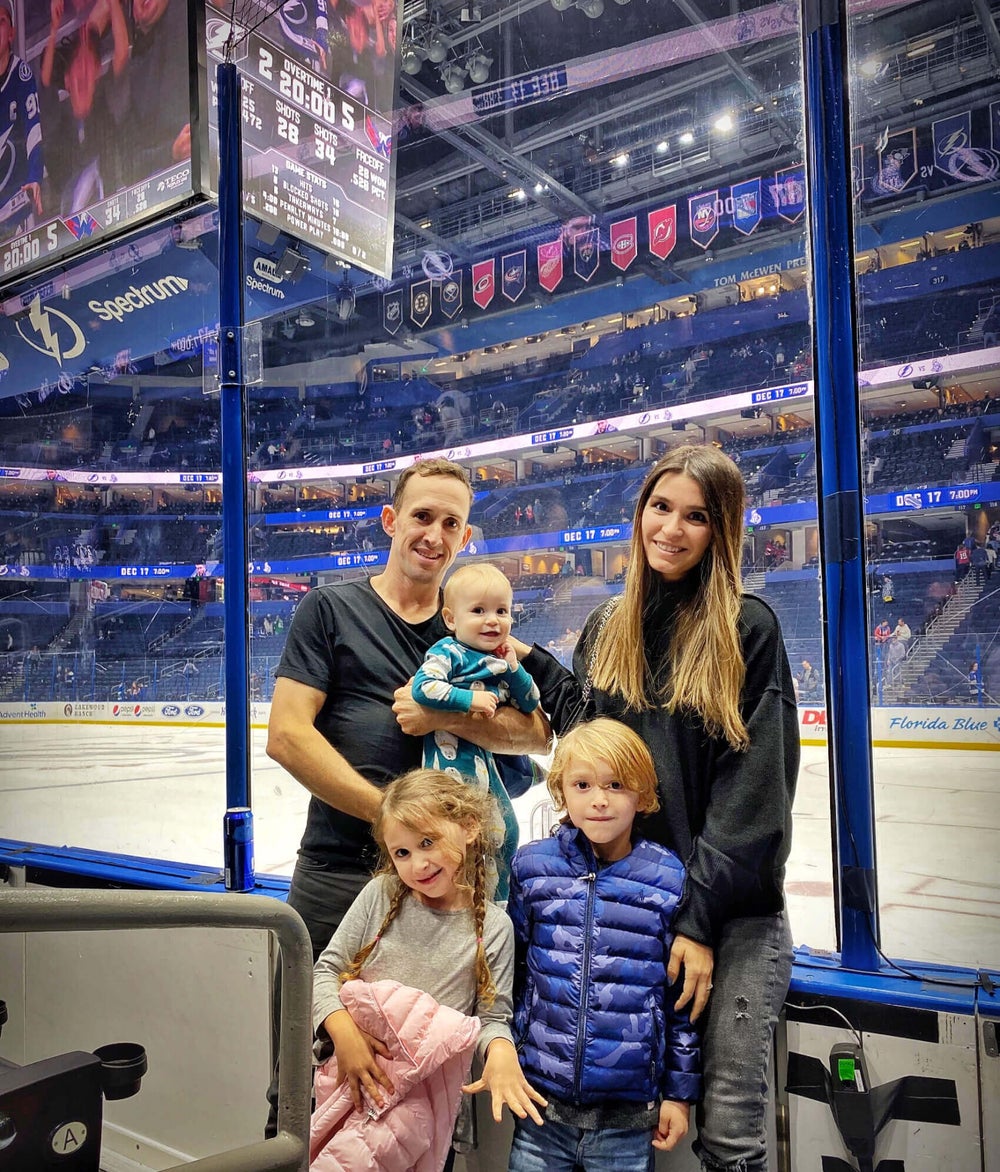 Life after professional sports: James Sixsmith’s dream life turned into having the freedom to care for his family and serve as a role model.
Image Credit: James Sixsmith

Though he dreamed of the typical trappings of wealth as a kid, Sixsmith says his life’s vision looks much different today. “My dream life turned into having the freedom to take care of my kids and show them how to be good people,” he says.

Sixsmith knows they’ll only be young once and is grateful he can handle school pickups and make soccer practice. Sixsmith golfs regularly, cringing when friends complain about the hundreds of emails piling up during their brief respite from corporate life.

Sixsmith maintains his hockey ties, working with the minor league players’ association to funnel current and former athletes through Trade Context. “A lot of retired athletes are in a bad place,” he says. “Their bodies are beat up, they haven’t saved enough money, and they don’t have a Plan B.”

Trade Context has provided more than $7 million to aspiring traders and helped thousands more through seminars. Many of their students are average guys who want to create a second revenue stream.

One of Sixsmith’s proudest moments came in January 2020, when he received an email from a student who attended a Trade Context seminar after realizing he was woefully unprepared for retirement. Within 70 days, he had turned $2,500 into $25,000.

“He understands the market now,” says Sixsmith. “No one can take that skill away from him. It’s exhilarating to see people learn something they can use for the rest of their lives.”

Ultimately, showing others a path to freedom is what gets Sixsmith excited every morning. “A lot of people are struggling in a life they don’t love,” he says. “Or maybe they love what they’re doing like I did, but they know they need to get out eventually. I want them to know that with determination and perseverance, you can create the life you want.”

EDITOR’S NOTE: This article expresses the views and opinions of an individual and is not a substitute for professional financial advice. Do your own research and consult your own financial adviser.