Coronavirus: Availability Of Essentials Via E-Commerce Gets Better

According to a survey by community platform Local Circles, 57 per cent of consumers were able to find most essential goods via online ordering, an improvement from only a few days ago.

By Debroop Roy April 17, 2020
Opinions expressed by Entrepreneur contributors are their own.
You're reading Entrepreneur India, an international franchise of Entrepreneur Media.

With the countrywide lockdown extended due to the Coronavirus outbreak, ecommerce companies delivering essential products continue to face unprecedented demand. While the sudden announcement of the lockdown and confusion amidst authorities had disrupted major parts of the supply chain, with time, things seem to be getting better, according to a recent survey by community platform Local Circles.

The survey, conducted on April 13 and April 14, found that 57 per cent consumers were able to find most essential goods via online delivery firms in the preceding 48 hours. It received more than 16,000 responses from consumers in over 180 districts of India. 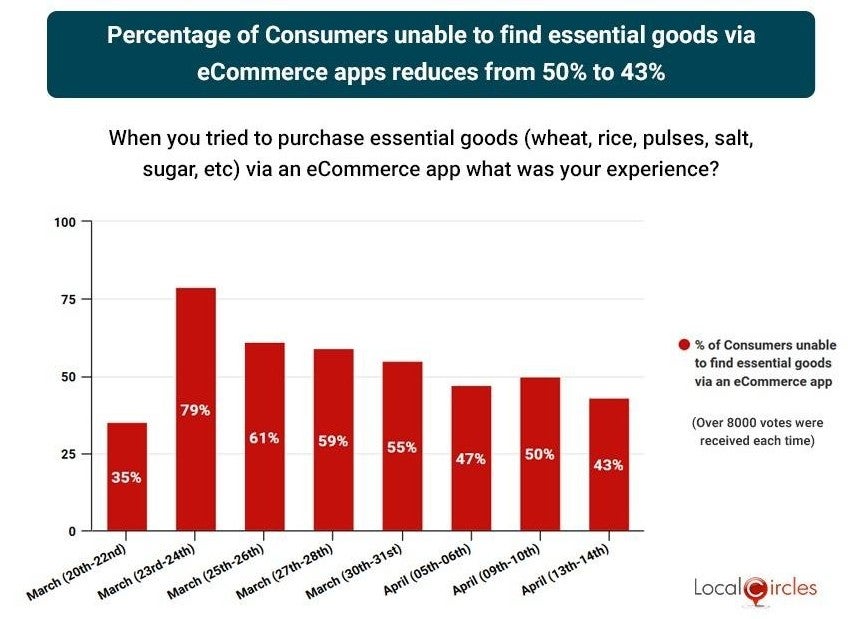 The numbers were an improvement from previous weeks, where on April 9 and April 10, 50 per cent of consumers were able to find most essential goods through online ordering. Before the Janta Curfew on March 22, it was 65 per cent.

This improvement comes on the back of several companies including Cure.Fit and ShopClues getting into the delivery of essentials during these troubling times, as well as collaborations between manufacturers and those with a delivery fleet. Grocery delivery firms such as BigBasket and Grofers have quickly tried to expand their existing fleets as well to meet the surge in demand.

There have also been detailed guidelines issued on how companies can attain passes for their respective employees working on the ground, so as to allow some breather in the first and last mile. 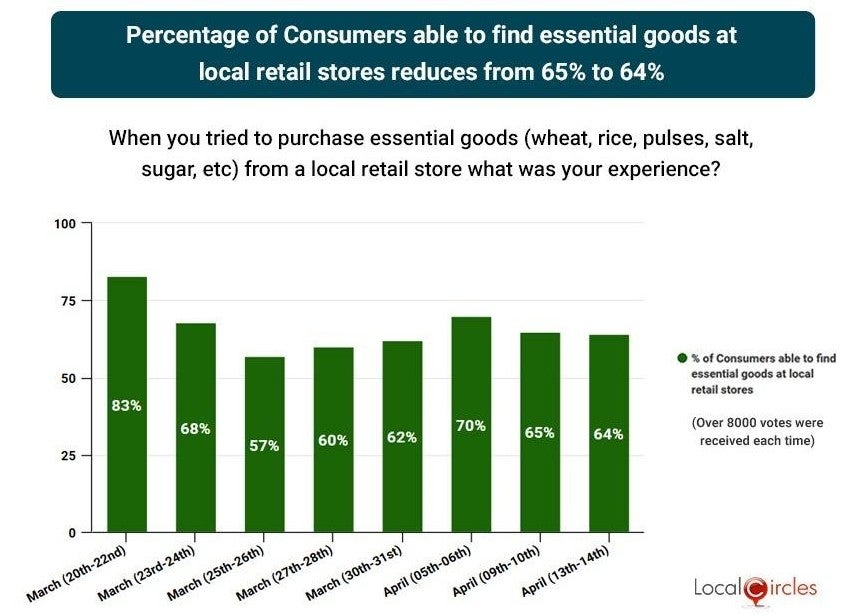 On April 9 and April 10, 65 per cent of consumers were able to find essential goods at local retail stores, a number that slid marginally to 64 per cent on April 13 and April 14. Prior to the Janta Curfew, this stood at 83 per cent.

Some companies such as LoveLocal (previously m.Paani) have also extended their services for free to local retailers so as to set up their shops online.