As per a report released by app insights tracker Sensor Tower, the Zoom app saw close to 131 million installs worldwide in April 2020, a staggering 60 per cent growth compared to the same period a year earlier.

By Debroop Roy May 9, 2020
You're reading Entrepreneur India, an international franchise of Entrepreneur Media.

Video conferencing service Zoom topped the worldwide charts for mobile application downloads in April, gaining from the sudden surge in demand for its services from businesses and individuals working from home due to the Coronavirus outbreak.

As per a report released by app insights tracker Sensor Tower, the Zoom app saw close to 131 million installs worldwide in April 2020, a staggering 60 per cent growth compared to the same period a year earlier. It received the most installs during the period from India (18.2 per cent) followed by the United States (14.3 per cent).

Several companies from across sectors have had to switch to a work-from-home regime during what has turned to be an unprecedented crisis for the global economy, resulting in massive traction for services like Zoom.

San Jose, California-based Zoom Video Communications Inc, the company behind the video conferencing platform, has seen its share price on NASDAQ grow over 120 per cent so far this year.

Interestingly, Google Meet and Microsoft Teams were positioned third and fourth respectively for Apple App Store installs during the month, helping them find a place in the top ten overall.

The increasingly popular social media app TikTok came a distant second during the month, with more than 107 million installs, which reflected a 2.5 times growth from a year earlier. The geographies that contributed the most were once again India (22 per cent) and the US (9.4 per cent).

In March, TikTok had topped the charts with 115.2 million installs, while Zoom had come third overall despite being the most downloaded app from the Apple App Store. 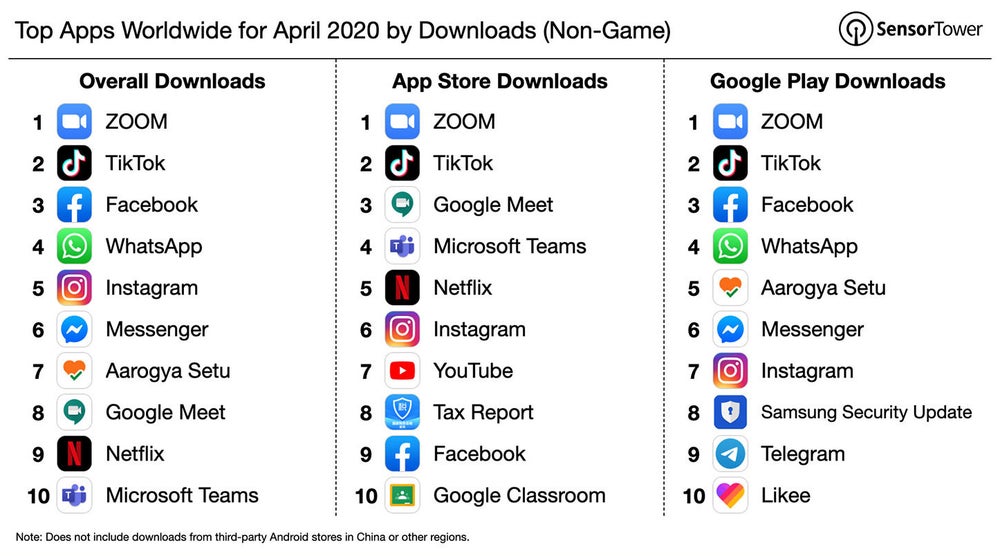 The sudden surge in users and engagement hasn't been without its share of problems for Zoom.

Cybersecurity experts have pointed out multiple privacy and security issues in the platform, with the Indian Ministry of Home Affairs issuing an advisory last month, stating that it was not safe to use and also listed out multiple guidelines for those who wanted to continue doing so.

In fact, seeing the necessity for a safe and secure video conferencing app during these times, the Ministry of Electronics & Information Technology had announced an innovation challenge for the development of such a solution under the Make in India initiative.

Zoom founder and chief executive officer Eric Yuan had also separately apologised for the security issues. "We recognize that we have fallen short of the community’s – and our own – privacy and security expectations. For that, I am deeply sorry, and I want to share what we are doing about it," he stated in a blog post.