The WISE Up Series to amplify the voices and insights of women innovators leading initiatives that scale deep.

Ashoka Arab World, a Cairo-based platform for social entrepreneurs, is gathering women innovators and decision-makers to highlight their stories of impact during a three-day online series WISE Up.

From July 13-15, 2020, WISE Up is being hosted on the virtual event platform Hopin. Interested attendees can register to join it here​.

Ashoka Arab World will focus on the concept of scaling deep, a model for impact where social narratives, long-held assumptions, and cultural norms are reformulated.

The series aims to spark discussions at the ecosystem-level around how we can better invest in and commit to such scaling deep models and redefine mainstream definitions of success. “The mainstream definition of success in the social entrepreneurship ecosystem prioritizes scaling ​out,​ a franchise-oriented strategy that creates impact by replicating a venture, targeting large numbers of beneficiaries, and expanding geographical reach," said Dr. Iman Bibars, Regional Director of Ashoka Arab World and leader of the Women’s Initiative for Social Entrepreneurship (WISE). 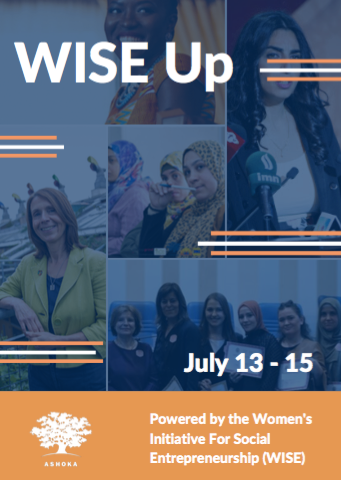 "Among our global network of social entrepreneurs, we’ve observed that women innovators tend to scale their impact ​deeply," Dr. Bibars noted. "T​hey give more weight to shaping cultures, beliefs, norms, and patterns of behaviors. Through the Women’s Initiative for Social Entrepreneurship, we’re working to disrupt the existing paradigm of scaling and impact among stakeholders in the entrepreneurship ecosystem, redefining success from a gender lens and elevating the deep impact women lead."

The event will also serve as the launch of the WISE storytelling initiative, ​a project aimed at shedding light on more than 200 women Ashoka Fellows and women social entrepreneurs from around the world who are leading innovative and inspirational movements for change.

The WISE UP series is part of Ashoka Arab World's Women’s Initiative for Social Entrepreneurship, a global project to elevate the number, knowledge, and power of women innovators.

A CEO Title Doesn't Always Equal Success. Here's What Does.

5 Habits of a Highly Effective Coach