Founded in 2016, Gramophone claims to reduce cost of cultivation by 15-20 per cent

India is an agriculture-based country. Around 70 per cent of the entire population of the country is associated with agriculture of which 80 per cent is in rural areas. The sector contributes 17-20 per cent to the GDP and provides employment to the 60 per cent of the population. Even during the difficult times of the ongoing pandemic, when India’s GDP contracted by 23.9 per cent in the Q1 of FY21, agriculture and its allied activities was the only green shoot to grow at 3.4 per cent.

Despite understanding the importance of agriculture, little has been done in agronomics. Lack of understanding of soil, excessive use of fertilizers, poor guidance and inferior quality products, among others, have degraded the rich nutritious soil of resulting in lower production.

In order to tackle these pain points, an Indore-based agritech startup is on a mission to deliver agronomic solutions to the country’s farmers and help them to increase produce while reducing the cost of cultivation.

In an interaction with Entrepreneur India, Tauseef Khan, co-founder of Gramophone, talks about his startup and how it’s helping the food bearers of the country.

The startup was launched in 2016 by four friends Tauseef Khan, Nishant Vats, Harshit Gupta and Ashish Ranjan Singh. Both Khan and Vats are agriculture graduates from IIT-Kharagpur. Both of them got placed with John Deere where they worked with the designing of various agriculture equipment. Khan later moved to an agriculture-based consulting company. Fate had it so, both Vats and Khan met again at IIM-Ahmedabad where they did MBA. This is where they met their co-founder Gupta. Singh who graduated from IIT-Madras was a childhood friend of Khan and joined the firm as the chief technology officer.

After completing their MBA, Khan worked with a venture capital firm which invested heavily on a agirtech startups. Vats joined Clinton Giustra Enterprise Partnership as consultant on agriculture value chains. Gupta worked in the sales and marketing team of TAFE, a farm equipment company.

“We thought there are a plethora of technology related solutions in different sectors, why not provide a similar type of solutions to our farmers and try to solve their problems related to production output,” explained Khan.

The startup currently helps around  550,000 farmers who have 2.5 million acres of land across the country.

Gramophone has built an intelligent farming platform through which it delivers agronomic intelligence and a convenience of delivery of agri inputs such as seeds, crop protection and crop nutrition products. The founders have built a platform that helps farmers get tailored agri-advice on crops, soil, weather, etc, through their ‘Krishi Mitra app’ that serves as the point of access for farmers and also through their physical retail ‘hubs’ that act as distribution and demand generation centres.

He said the startup always went for an approach that prevents crops or soil from getting destroyed rather than a cure approach.

Khan claims Gramophone has helped farmers to increase the yield by 30-40 per cent while reducing their expense by 15-20 per cent.

The firm through its customer care support, Gram Uday centres, Gramophone app, and village representatives provide smart solutions to farmers facing low productivity due to damaged crops or poor soil conditions, etc. It recommends them which quality products they need to purchase and deliver it at their doorstep through their last mile delivery partner. 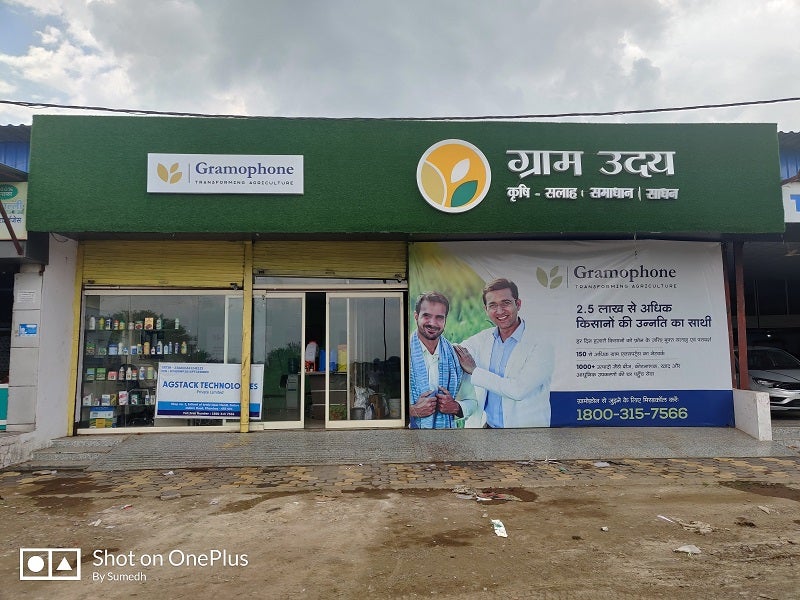 “We have built a tech platform that with a couple of data points will provide a complete recommendation to farmers from which products to buy, when to sow, how to care of the soil, among others,” added Khan.

To further educate farmers on degradation of the soil and what products to be used, the startup has also kicked off an initiative called ‘Super Safal Program Initiative’.

In this Super Fasal Program, Gramophone thoroughly monitors if the crop has excess nitrogen, phosphate or potash, etc. Using the statistics report, farmers can spray only the optimal quantity of fertilizers to achieve the perfect NPK ratio.

The startup in 2019 also launched a kit to boost the fertility of the soil.

The startup with its technology-based solution has earned investors confidence and raised $3.5 million in Series A round from Infoedge, Asha Impact and Better Capital in August 2019.

The onset of coronavirus pandemic followed by three months stringent lockdown has severely impacted business across the sector. Khan said that in the initial first two weeks they halted the operation as there was no clear direction to where the lockdown was heading. After getting numerous requests from farmers, the startup commenced their operation in mid April.

The startup did face several operational challenges but soon started witnessing growth both in terms of revenue and onboarding new farmers.

According to Khan, the startup was catering to somewhere around 300,000-350,000 farmers. However, now the numbers have increased to 550,000 and Khan is confident that within next two months they will be helping around 600,000 farmers.

In terms of revenue, the startup has witnessed a 200 per cent growth compared with pre and post COVID times.

According to Khan, COVID has led to a significant behavioral shift among farmers. He said the pandemic and importance of social distancing have compelled farmers to rely on technology enabled solutions than a traditional approach. As the cases are increasingly, more farmers are likely to incline towards such tech-enabled solutions.

According to Khan, the pandemic has accelerated their product development. The company is currently working on an output market link index for the farmers. The startup is also looking at expanding from across the country. Khan claimed that for their apps to be used across the country they need to focus on various languages. They are currently focusing on Tamil and Telugu, hinting at expansion in their operations in south India within next two years.