Five Surprising Facts from the New 'Game of Thrones' Book

From Bruce Willis photobombing a shot with his yacht to North Korean-like security on the set, these are some interesting behind-the-scenes revelations about the classic series.

Winter is coming—so what could be more fitting than a new book about Game of Thrones? Fire Cannot Kill A Dragon chronicles the making of the epic series, which ran on HBO for eight seasons. Author James Hibberd, an editor at large at Entertainment Weekly, interviewed 50 cast members, producers, executives, and crew to capture behind-the-scenes stories and classic moments.

With so much written about Game of Thrones over the past 10 years, you might wonder if there is anything new to reveal? Answer: Yes, it turns out there are still quite a few juicy tidbits still coming out of Westeros and King's Landing.

Hibberd spoke to us about his book on my weekly podcast Write About Now, which features interviews with successful writers of all types. Here are some fun highlights from the conversation.

1. Bruce Willis photobombed a few scenes with his yacht

The "Mountain and the Viper" fight scene from Season 4 was set to be filmed at a seaside amphitheater in Dubrovnik, Croatia. But before the cameras rolled, a few yachts needed to be cleared from the background. According to multiple sources from the show, everyone agreed to move their boat except for one person: actor Bruce Willis. While the Die Hard star himself would not confirm or deny, Hibberd does confirm that the skipper behind the wheel that day had some serious "yacht rage." He was "piloting his yacht back and forth to disrupt the shoot," Hibberd says.

One of the first actors approached to be on the show was Peter Dinklage, who famously played Tyrion Lannister. But Dinklage wasn't into in at first. He had recently starred as Prince Caspian in The Chronicles of Narnia, and he didn't want to be typecast as a stereotypical dwarf in another fantasy story. Eventually, he agreed to take the part but with one condition: No long-flowing, white dwarf beard—even though the book's character has a long flowing white beard. "This is why Tryion is clean-shaven in the first few seasons," Hibberd explains. "After the character was established, he does end up growing his kind of cool, rockstar beard."

3. Maise Williams was bummed her mother made her audition

The show's creators were having a tough time filling the role of Arya Stark, the young heroine who defies gender stereotypes. One day they received an audition tape from a 12-year-old English actress named Maise Williams, who reluctantly recorded herself reading some lines during her lunch break. "She was very bummed her mom made her do the audition because her class had a field trip that day to a pig farm," Hibberd says. George RR Martin, the author of Game of Thrones, was blown away by her performance. "Her facial features weren't at all what I had described in the books, but she was perfect," he says. The rest is history.

Related: Did Starbucks Make a Cameo on 'Game of Thrones'?

4. Hodor had to wear a prosthetic appendage

When Kristian Narn, who plays Hodor, was asked to do a nude scene, he was mortified, especially because there would be a ton of other actors on the set. He requested that he wear a prosthetic instead of flaunting his God-given assets. "I had to get the prosthetic planted and weaved into my own body hair. It was liberating and mortify­ing. There was a lot of laughter on set that day," Narn tells Hibberd. 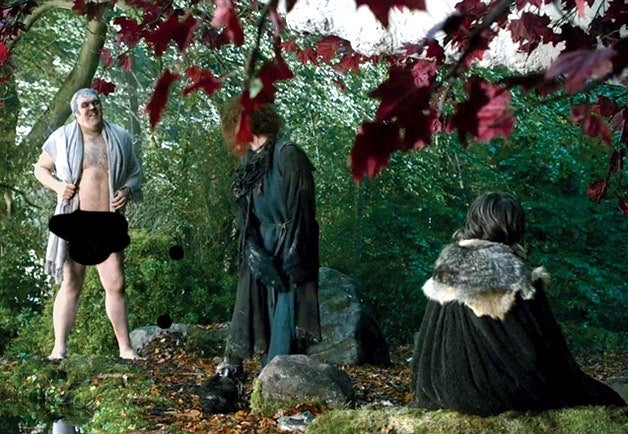 Hibberd visited the Game of Thrones sets in Ireland, Croatia, and Morocco every season the show aired (not a bad assignment!). For the first few seasons, security was lax, but once the show became an international sensation, HBO began to put crazy clamps on any potential leaks.

"They would take your phone and put stickers over the camera," says Hibberd. "You had badges that needed to be scanned. There was a one-way gate to get on the set." They had crews watching out for spying drones, and the producers even got the government to clear the aerospace around the set. On a set in Spain, the army set up a blockade miles away. "And still the paparazzi managed to infiltrate some sets and get pictures of sensitive scenes," Hibberd says.

To hear the entire interview, check out Write About Now.