By S Shanthi August 25, 2021
Opinions expressed by Entrepreneur contributors are their own.
You're reading Entrepreneur India, an international franchise of Entrepreneur Media.

For OfBusiness, a B2B commerce platform that turned unicorn post $160 million funding round by SoftBank last month, becoming a unicorn startup was never a goal. “As a matter of principle, we decided not to chase valuation, but we decided to concentrate on real value creation and profitability.  We always believed that when you are creating real value for the ecosystem, and your stakeholders or investors, valuation is something that is bound to follow,” Nitin Jain, co-founder, OfBusiness, told Entrepreneur India.

Jain and his cofounders, Asish Mohapatra, Vasant Sridhar, Ruchi Kalra and Bhuvan Gupta, were unfazed by other startups turning unicorn faster than them. “All that mattered was that we do some real innovation, and make sure that the SMEs (small and medium-sized enterprises) really benefited from our overall offerings and we kept innovating on their behalf,” he added.

One thing that all the co-founders had in common was to dream big and execute bigger. Their real goal was to generate real bottom line value for its SMEs and stakeholders.

“Unicorn for us is a recognition, but ultimately a vanity metric,” said Jain.

“In hindsight, the decision to not let other unicorns or valuations affect us was actually the turning point.  Our valuation in the past year went from $250 million to $1.57 billion, but again it’s just a vanity metric. The real metric will always remain the benefits that we generate as part of the bottom line for our SMEs and for ourselves,” he said. 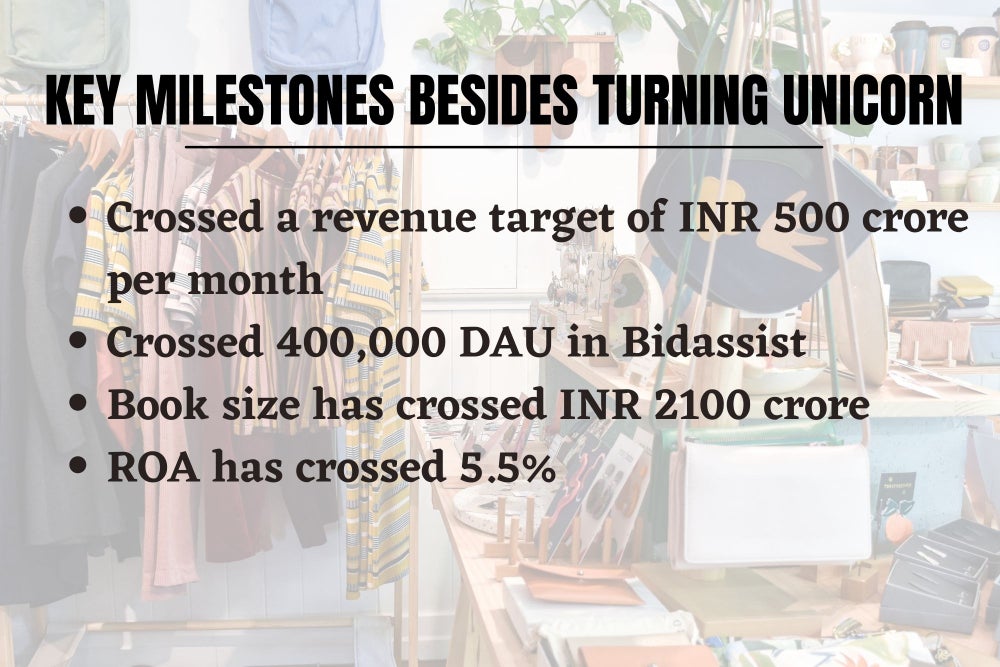 The startup’s only goal from the beginning was to differentiate itself with the services offered to the SME, and keep generating value for the SMEs, shareholders and other stakeholders via key eye on profitability.  “In fact, we were one of the late ones to enter the unicorn club with the value we had to offer to the SME ecosystem. We knew that come the time, the market would definitely price us right if we stick to what we think was right, and keep generating value for the ecosystem,” he said.

Journey To The Unicorn Club

Nitin Jain is a computer science engineer from IIT-Delhi.  Immediately after graduating, he went to London in 2008 and was there till 2015 taking care of the structured credits desk for The Royal Bank of Scotland.  He did, however, have a very strong inkling of doing something on his own and came back to India where he met co-founders Mohapatra, Sridhar, Kalra and Gupta who all wanted to do something big.

“We all started off with a blank sheet of paper.  None of the ideas that we initially thought of, materialized. All we knew was that we wanted to do something in the B2B world, and did not want to go down the Amazon, Flipkart, Myntra way, as that was a fairly saturated market,” said Jain.

B2B was nascent with only a handful of new-age players and the founders thought that with the B2C revolution, B2B was something that was ripe for explosion and innovation.

“We started tapping into our network, as the best way to kickstart is to ask for help from your network.  We went to one of our early backers – the then CEO of ILTD business at ITC, Mr. Sanjiv Rangrass, who connected us to various builders in Guntur, one of the headquarters of ITC.  That’s where our journey began,” said Jain. 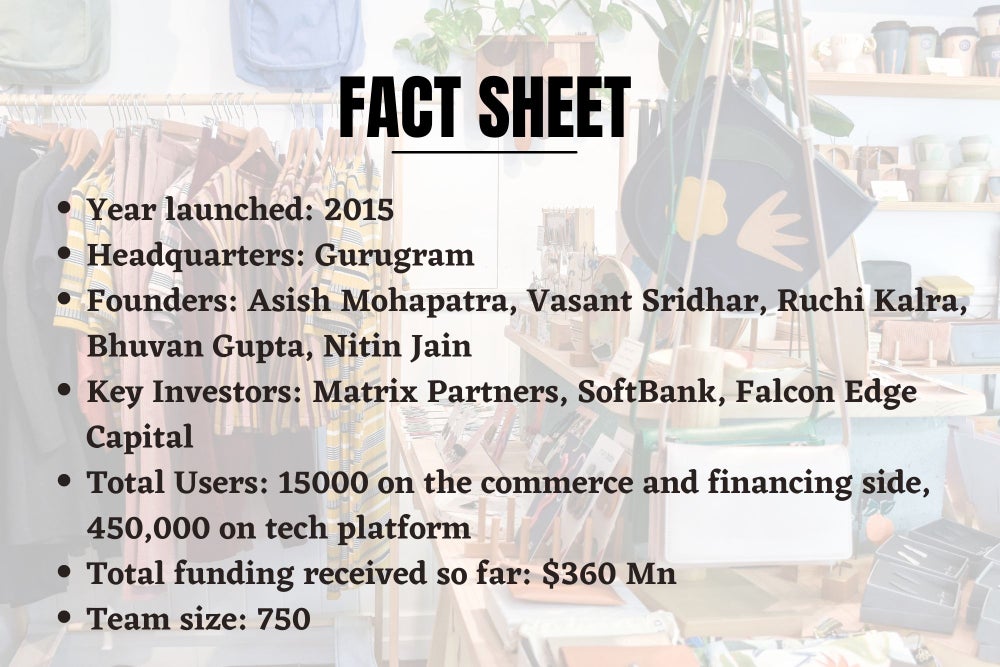 Initially, the startup tried to dabble into many things: logistics service provider for the third party, becoming a B2C construction player and helping consumers build houses, and dabbling into manufacturing and selling of furniture.

But, sooner they realized that in order to succeed they needed to be razor focused on one to two things, rather than dabbling into 50 things, especially during their early days.  “Once the product-market fit is established and you have achieved a decent scale, you innovate around new products.  This philosophy or learning kept us heavily grounded and results are here to show,” he said.

Another mistake was making lateral senior hires.  The founders believed that outside senior talent would be needed for scaling up, without which there was no other way.  “We could not have been further away from reality, Jain said, adding that the outside senior guys came with their own set of baggage and set mindset, which was difficult to gel with the culture of innovation we had groomed internally. “

About 90 per cent of the startup’s business leaders and P&L drivers today are management trainees that rose through the ranks and were able to make their own personality count.

An SME in India has three main issues. One, working capital limitation, as it has limited assets to offer to banks, only 30 per cent of its total working capital needs are fulfilled by the banks. For the remaining 70 per cent, it has to rely on NBFCs, local money lenders, and traders/distributors.

The second problem revolves around sky-high and opaque raw material pricing. Given that it’s an SME, it does not have access to large manufacturers to procure the raw materials. It often needs credit and low quantities, and none of these are offered by the large manufacturers.  Hence the opaqueness and the price differential is massive, and that takes a toll on the overall profitability of the SME.

OfBusiness is trying to solve each of these problems, along with providing a lot of tech products that improve the efficiencies for these SMEs.  The startup combines the power of commerce and finance. It finances raw material purchases for the SMEs, and also helps in aggregation and fulfillment of these raw materials by tying up with large and small raw material manufacturers, and a majority of the pricing benefit, it claims, is passed on to the end consumers.

The startup offers financial and working capital lines to the SMEs via its NBFC OXYZO Financial Services Pvt. Ltd. “The typical cost of lending by local lenders and traders is between 24-48 per cent. We offer these lines at anywhere between 15-18 per cent,” he said. SMEs also use their commerce engine to help drive down the prices further, as it also offers logistics and fulfillment services for the raw materials. The startup has recently started distributing financial services products and syndicating loans for some of its key clients.

In commerce, the company has three main lines of business. Procurement and fulfillment of bulk raw materials such as steel, aluminium, textiles, agri products, chemicals, leather, etc., generation of orders for SMEs and manufacturing and contract manufacturing by acquiring stakes in SMEs across India in key categories. 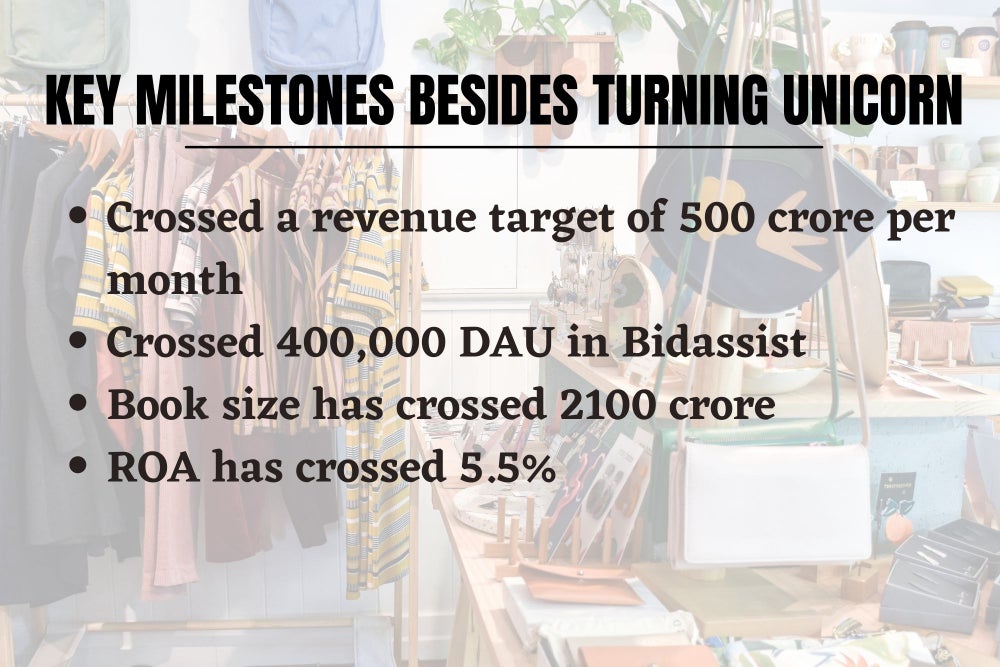 The pandemic has been quite unfortunate for humanity as a whole.  But it has also given various startups, including OfBusiness, wings to fly. “I think what helped was the fact that we were profitable long before the pandemic hit, and that helped cushion the blow in the initial months when the entire country and the world were under a lockdown,” said Jain.

The SME ecosystem shut down, and liquidity was hard to come by initially.  The infrastructure and movement of goods took a massive hit, and the traditional businesses and traders bore the majority of the brunt.  However, OfBusiness claims it was able to adapt as it moved swiftly and made sure that its clients never faced any issue with respect to procurement of materials in a timely manner. “This certainly helped us gain pole position in most of the products that we were aggregating,” said Jain.

The startup says that what also worked was that it did not fire anyone, and did not cut salaries. “I believe this also helped in keeping the attrition to a bare minimum and helped in attracting top talent from colleges,” he added.

OfBusiness is currently present in 20 states across India and aims to establish its export/import footprint as well.  It has started imports with dry fruits from the US and the Middle East, and aims to start supplying to these states.

Within India, it intends to go deep into the clusters that it is present in and add new categories and get deeper into its SME ecosystem.  “We would prioritize going deep into our existing cluster over adding new domestic clusters, as we need to be clear leaders where we are present.  We also intend to serve new categories that we are currently not doing to help our customers,” said Jain.

The startup launched an agri vertical, O'AgriFarm, approximately a year back and intends to add new categories such as leather, fabric, processed foods, and steel billets or iron ore to its repertoire. “Our tech offering to our local and global SME ecosystem is rapidly expanding with our platform Bidassist going global,” said Jain. The startup is also in the process of launching new SaaS products such as ProcureAssist to help its SMEs procure cheaper and better and has also started offering its in-house ERP system.