By S Shanthi September 2, 2021
Opinions expressed by Entrepreneur contributors are their own.
You're reading Entrepreneur India, an international franchise of Entrepreneur Media.

“Building a great product and service, expanding the scope is what is in our control and not the unicorn status,” said Amrit Acharya, co-founder, Zetwerk, in a conversation with Entrepreneur India.

As much as Acharya and his co-founders--Srinath Ramakkrushnan, Vishal Chaudhary, Rahul Sharma--are happy about becoming one of the fastest startups to turn a unicorn, what they take pride in is the way they are inching towards building a sustainable business that can go on for decades to come. “The company should outlive us and remain profitable. That’s our goal.”

Acharya believes the unicorn status has, however, brought Zetwerk to the limelight. It has made people understand the problem they are solving and given assurance to family, friends and employees that the business model they have created is flawless. “We have been operating in this space for over two years, but we have entered the mainstream now. And, when an employee’s parents ask what you do, they have a readymade answer now,” he said.

Launched in 2018, Bengaluru-based Zetwerk is today a profitable B2B marketplace that offers manufacturing solutions across a diverse range of products. In August 2021, the company raised $150 million from D1Capital Partners and others, taking its valuation to $1.33 billion.

Under the first category, it offers various manufacturing services such as steel fabrication, CNC machining, injection molding, aluminum die casting, 3D printing, installation, testing and commissioning, among others, to a diverse set of industrial original equipment manufacturers (OEMs) and engineering, procurement, and construction (EPC) customers through its global manufacturing network.

While Zetwerk has today landed the perfect business model, the journey to finding it was not easy.

Acharya and Ramakkrushnan went to IIT-Madras together and were in the same hostel. Interestingly, both of them also worked together at ITC, in the same division under the same manager. “My job was to build a new factory. I was a buyer for a lot of customer products such as machines, infrastructure, etc., and so I understood the demand side really well,” said Acharya.

This experience of two years made Acharya understand the entire manufacturing ecosystem. “Lots of problem-solving abilities came from this earlier stage. I was managing close to a hundred vendors who were giving me directions on Excel and Google Sheets and then we realized that there must be a better way to do this,” he said.

While Acharya specialized in the demand-side of the business, Ramakkrushnan knew about the supply-side as his family was into the manufacturing business and he was also the co-founder of OfBusiness (he exited the company in December 2016).

“That’s how we came together. We had an understanding of the problem. And, in our view, the manufacturing industry was still the same in 2018 when we started as it was in 2010,” said Acharya.

Initially, the founders built software that helps manufacturing enterprises and their procurement better. However, very soon they realized that it wasn’t working. Even though a lot of companies loved the software, it would take them 6-12 months to approve and that was a lot of time to wait.

At the same time, Acharya and his co-founders realized that companies were finding it difficult to find high-quality manufacturing supplies. Thus, pivoting to a marketplace model made more sense. They started onboarding a lot of manufacturing suppliers in the country, digitized it and started showing it to the same set of customers. This time, the customers were able to make a decision much faster because they had the manufacturing job for which they needed suppliers immediately.

This was the turning point for Zetwerk. “The business picked up really quick. Luckily we have great investors who stood by us even though we wanted to pivot in just two months since we started the company. Then it took off and by December 2018, the company was growing almost 10X,” Acharya said. 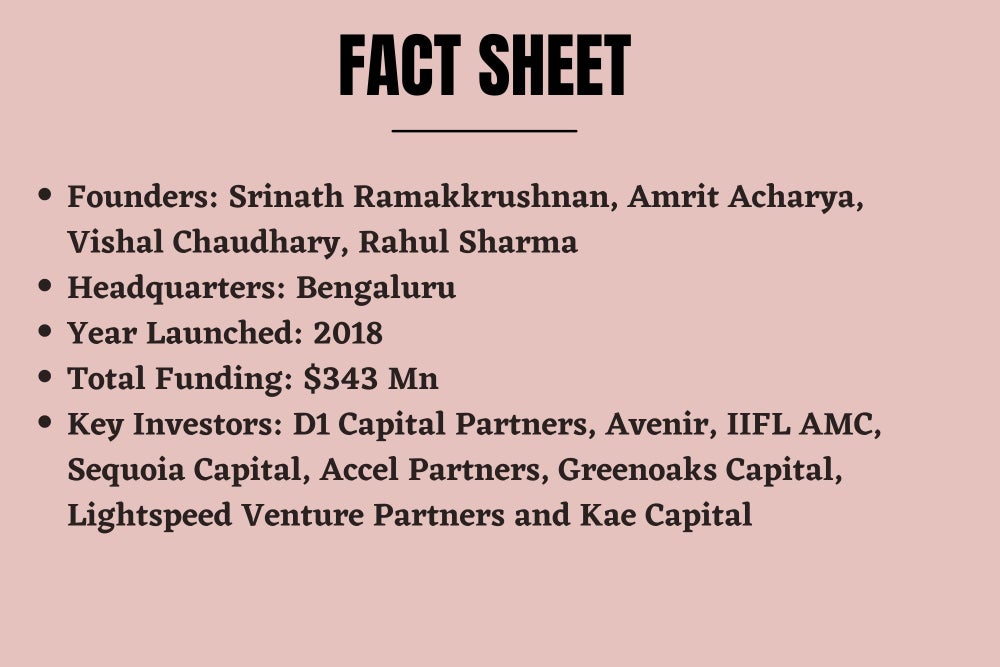 Like many startups, Zetwerk also made some wrong hiring decisions. The founders were busy hiring senior people from the industry who had been there and done that. “Ultimately what happened was that the culture of the company was different. They were married to two different cultures, a software engineering culture and an industrial manufacturing culture. Today, we have done a great job in integrating these two cultures,” he said.

The second and very unique aspect about Zetwerk is that it is just three years old and spent half the time in the lockdown. But, at the same time, it grew 4-5X. “The company has grown to 500 people, but we had never met all of these people. Around 50 per cent of the company is new. When we first went into lockdown, a lot of people left the company after a month, or two and we could not understand why as it is a tough market and there are not a lot of jobs available. Still, people were finding it difficult to adapt,” said Acharya.

That's when the founders realized that they had to put in hard work into creating a positive culture. “Today, I talk to close to 100 people every month. It is very difficult for me to do as it takes 100 hours of my time. But, we had to integrate them into the culture. People end up doing what we are telling them but they are not clear why we are doing it because it does not feel very logical. There is no shortcut to solving that except speaking to them as often as possible. This is something I learned the hard way,” he said.

The third learning that the founders had was that being profitable or monetizing revenue was not an overnight decision. “You can’t decide today that I will be profitable next month. It takes time and culture to believe it is the right thing to do,” he added.

Today, the employees are still working from home and the leadership team hasn’t found a strongly compelling reason to change the remote-first way. They believe that work-from-home has helped them bring talent from the entire country.

Due to the pandemic, customers were not able to audit their machines or stay updated on the progress of manufacturing. That is where Zetwerk became the only option for them since it offered a digital selection of manufacturing supplies that gave them complete visibility.

“We are doing complete order visibility from order placement, to dispatch and delivery. Initially, people found it risky to work with a new startup but our business model helped us penetrate the mind space of customers,” said Acharya.

The startup has handled a lot of customers in the last year, but most of its growth has come from existing customers. “If a typical customer spent INR 1 lakh earlier, they have started spending INR 3-5 lakh in the last one year. This happened because our existing customers found us reliable and convenient. That was the positive side,” he said.

Right now, the startup is in a space that is very unique with very few players. But, things may change and more companies may have similar business models in the coming years. However, Acharya is not scared of the competition and believes there is ample opportunity for everyone to flourish.

“I will be the happiest person if there are 100 other companies trying to do what we are doing. We are trying to build solutions that can serve the most number of industries in a horizontal manner but at some point in time, people have to go vertical,” he said.

Acharya would like to encourage more entrepreneurs to look at each of these industries as they are not small markets but trillion-dollar industries. “In the US, if you look at most of these companies, they are highly industry-specific. We will welcome more companies to join this journey and we would love to partner with them,” he said.

What would still give Zetwerk some edge is that they would be able to look at cross-industry solutions, Acharya believes. “Today, we are sitting at a very large opportunity. In the last year, we have introduced 100 new customers to explore Indian manufacturing for the very first time. The companies that previously used to transact with China and never bought from India before, are now liking what we offer,” said the co-founder.

Acharya signed off with an interesting piece of advice for budding entrepreneurs. “Today, the Internet has shown that even the smallest of the niche markets make a large problem. Falling in love with the problem is important. Even if there are ups and downs, you will find a solution sooner or later.”

How DeFi Is Changing Financial Institutions

9 Things CEOs Should Stop Doing If They Want To Scale