Is Ballard Power Systems a Buy at Less Than $10?

Hydrogen fuel cell technology company Ballard Power Systems (BLDP) has made significant advances as a leading fuel cell player in the medium- and heavy-duty mobility markets. But even though BLDP...

By Imon Ghosh April 25, 2022
This story originally appeared on StockNews

Hydrogen fuel cell technology company Ballard Power Systems (BLDP) has made significant advances as a leading fuel cell player in the medium- and heavy-duty mobility markets. But even though BLDP stock is currently trading at less than $10, given the company's weak margins and the fact that it is struggling to generate more revenues from its Technology Solutions segment, is it worth betting on the stock now? Let's find out. Read on.

Leading developer of innovative clean energy fuel cell solutions Ballard Power Systems Inc. (BLDP) in Burnaby, Canada, offers its products to markets that include heavy-duty mobility, material handling, and engineering services. BLDP's shares have slipped 10.5% in price over the past five days and 25.2% over the past month, reflecting investor concerns surrounding a significant decline in shipments of its fuel cell products in China and its unimpressive fourth-quarter earnings report.

Closing its last trading session at $8.84, the stock is trading 61.8% below its 52-week high of $23.13. While the hydrogen fuel cell provider has made significant progress in expanding its customer base in its target markets amid the increasing support for a hydrogen economy, the stock's lofty valuation does not justify its weak margins.

The company's order backlog has declined by 14.2% sequentially in the fourth quarter, suggesting underwhelming demand for its fuel cell products and services. 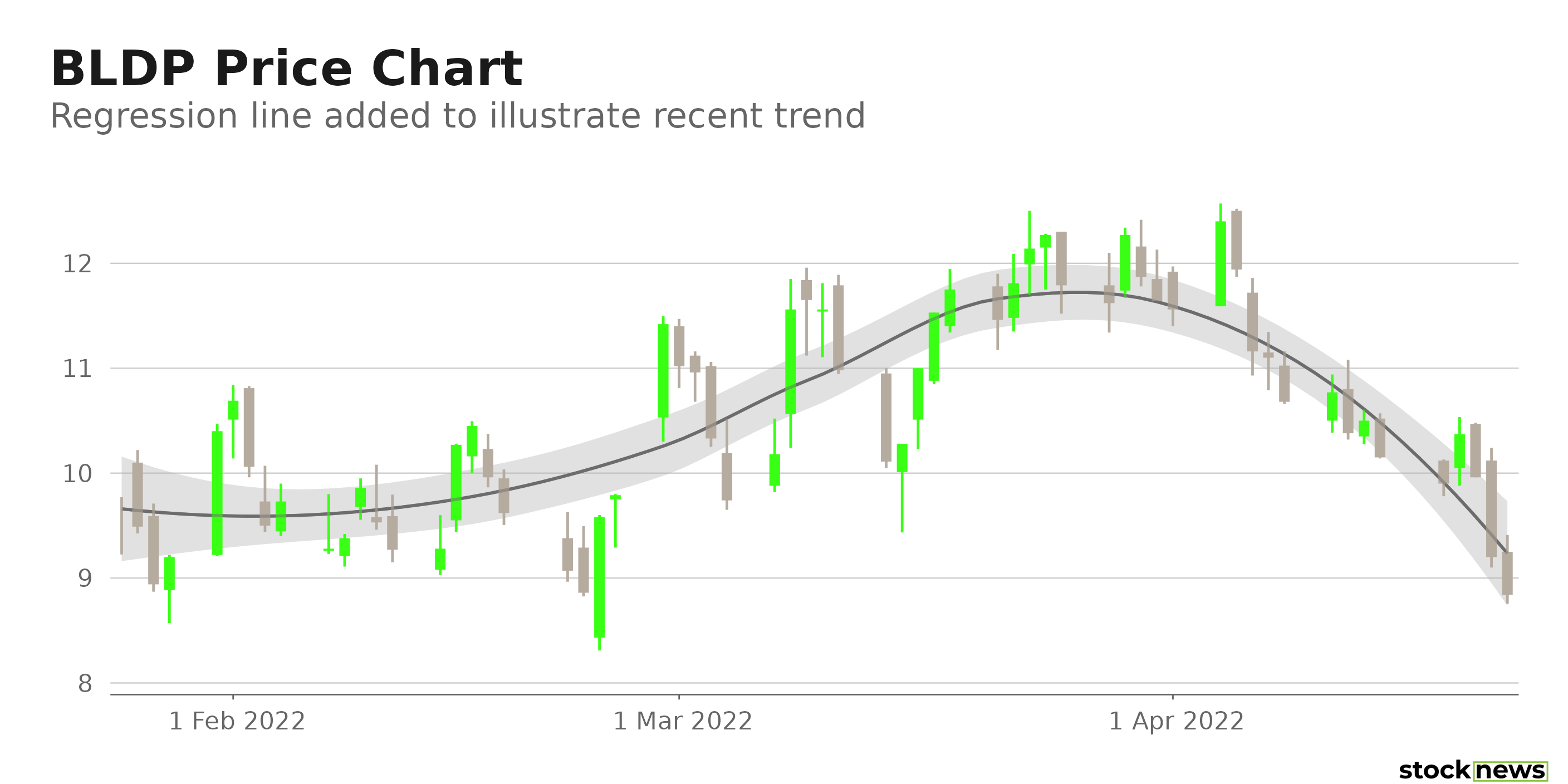 Here is what could influence BLDP's performance in the near term:

BLDP's Heavy Duty Motive market segment is increasingly dependent on Chinese customers for a substantial portion of its revenues. Although the country has recently unveiled a long-term plan to push for a clean hydrogen economy and achieve 50,000 hydrogen-fueled vehicles by 2025, it could take a while before it sees a national commercialization roll-over and generates higher demand for hydrogen fuel cells companies.

In addition, since a significant portion of BLDP's Technology Solutions revenues comes from a limited number of customers in the market, risks associated with the continuing commitment of these customers to their fuel cell programs could be a concern.

BLDP's total revenue came in at $36.7 million for the fourth quarter, ended Dec. 31, 2021, up 28% year-over-year. However, its revenue from Technology Solutions declined 26%, due mainly to decreased amounts earned due to the completion of customer programs. Furthermore, its gross margin stood at 13% for the quarter, down seven percentage points year-over-year. This was primarily due to rising labor, supply, and freight expenses. The company's adjusted EBITDA amounted to a negative $25.5 million, compared to negative $14.5 million in the prior-year period. Also, BLDP reported a $43.8 million net loss, representing an increase of 204% from the prior-year quarter.

BLDP has an overall F rating, which translates to Strong Sell in our POWR Ratings system. The POWR Ratings are calculated by considering 118 distinct factors, with each factor weighted to an optimal degree.

Our proprietary rating system also evaluates each stock based on eight distinct categories. BLDP has a D grade for Quality. This reflects the stock's negative ROTC and ROE.

In terms of Value grade, the company has a D, which is reflective of its premium valuation. Also, it has an F grade for Stability.

Beyond the grades I have highlighted, one can check out additional BLDP ratings for Sentiment, Growth, and Momentum here. Of the 92 stocks in the C-rated Industrial – Equipment industry, BLDP is ranked #89.

While BLDP's strategic initiatives in building new partnerships and deepening its customer base have captured investor interest, its shares have suffered a significant blow because of a massive increase in its operational expenses and losses. Furthermore, a decline in its order backlog in its last reported quarter and the company's declining revenue in its Technology Solutions segment could foster negative sentiment toward the stock. So, we think the stock is best avoided now.

How Does Ballard Power Systems Inc. (BLDP) Stack Up Against its Peers?

While BLDP has an overall F (Strong Sell) rating in our proprietary rating system, one might want to consider taking a look at its industry peers having an A (Strong Buy) rating: Hurco Companies, Inc. (HURC) and Preformed Line Products Company (PLPC).

About the Author: Imon Ghosh

Imon is an investment analyst and journalist with an enthusiasm for financial research and writing. She began her career at Kantar IMRB, a leading market research and consumer consulting organization.

The post Is Ballard Power Systems a Buy at Less Than $10? appeared first on StockNews.com