Modi always loved everything technology and that is why he launched Safe Security (formerly Lucideus) in 2012 when he was still in college and when not many organizations prioritized investing in cybersecurity.

“Anything to do with technology has always fascinated me. If you think about cybersecurity, it is not really a different division of computer science, but it's really taking computer science at a more first principles and fundamentals level. If you understand how an application works, a laptop works, the server works and S3 bucket on the cloud works at a bits and bytes level, you are able to go in and change things out there which somebody who doesn't understand how that works, would never be able to change,” he said.

Modi wanted to make a constructive or a positive impact by using his passion for technology and that is why chose this space. “Did I do a market analysis and a market survey and knew how big cybersecurity would be a decade down the lane? The answer is no I did not. Let's just say I got lucky to be in this space, which is growing now at 15 per cent year over year,” he said.

Having said that, when Yahoo and LinkedIn made headlines for hacking attacks around a decade ago, Modi also knew that this is an industry of the future. So, it was a win-win for him. Cybersecurity was his passion and was also going to grow exponentially.

Safe Security launched its product and pivoted from services to products in 2018. They rebranded from Lucideus to Safe Security in February 2021. "Safe Security used to be a services company, where they were doing vulnerability assessment for some of the largest names on the planet. Our customers included Google, Facebook, McKinsey, some of the biggest fortune 500 names that you would talk about. We were doing their ethical hacking, in other words with their permission, we were hacking them,” he said.

“So while we did very well, but to become a very large company and make a much bigger impact, to be successful we had to hire 10s of 1000s of people. So what we did in 2018 was go back to our customers and ask them what the number one problem in cybersecurity that they were not being able to solve and we tried to build a product around that. And that product in 2018 and when we started building it, it was called safe,” he added.

When moving from a service to a product company and naming their product as ‘safe’ it made more sense to name the company over the product. “We thought a good marketing strategy would be not to say my company's name is x and it has a y product. It's a powerful thing to say my company's name is x and the product’s name is also x. It's much easier for branding, marketing, and at the same time for customers to remember us,” he said.

Modi still regrets not understanding the power of being a pure SaaS cloud-only product company early on. In fact, in his words, Modi was so naive that even three years ago when people asked him if he was deploying products, he would tell them that they were doing both as it was easy to deploy on both sides. “It was only two years back that we understood that it is in the interest of our customers and of course us as a company also to be able to deploy the product and be a pure SaaS cybersecurity company,” he said. 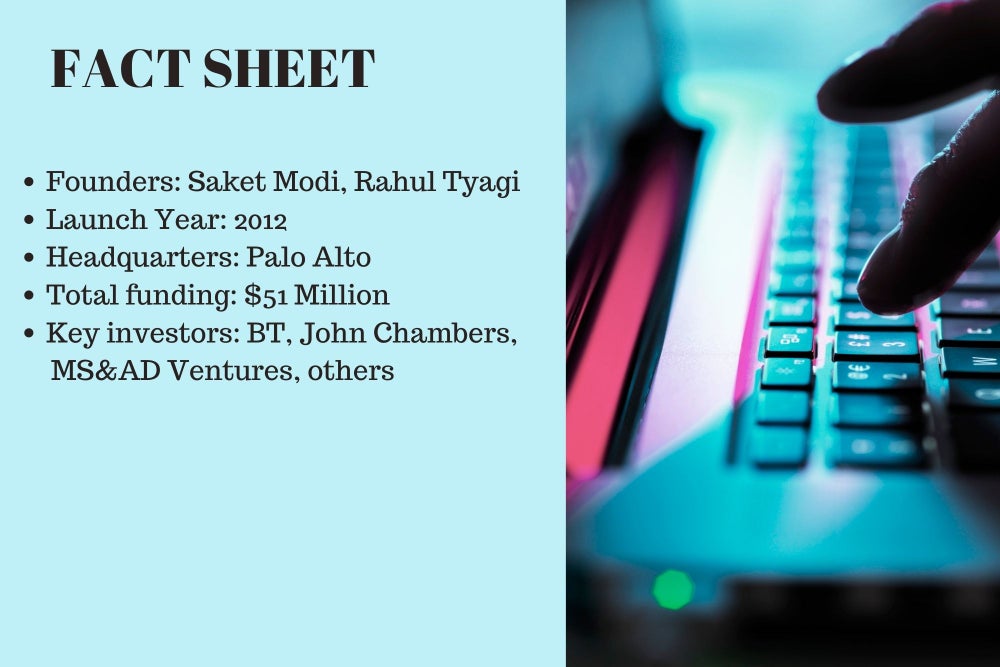 Further, for the first six years, the company was based in India, which was not one of the best decisions for the startup. “While I'm an Indian at heart and I'm super happy and proud of being an Indian, India is, unfortunately, less than 1 per cent of the global cybersecurity market. But if you take the United States or Western Europe, that amounts to 45 and 25 per cent of the cybersecurity market respectively. So, while we did extremely well in India in the first six years of business, I did not move where the bulk of our customers was,” he said.

Building a strong customer base

Safe Security claims to be at a growth rate of 300 per cent year on year and has over 200 customers worldwide including multiple Fortune 500 companies. Their clientele ranges from Munich Re, News Corp, BT Group, Molina Healthcare, TATA consumers products Ltd., ICICI, Pidilite, among others.

Talking about growth after the pivot, he said, “It has been nine quarters and 27 days since we've been selling the product and what I can tell you is that we've been overwhelmed with the kind of response. We are now positioned to go ahead and again grow the same amount of the same magnitude this year and next year, and a lot of that is fueled by our funding.”

Modi also spoke about how each of the markets he caters to, such as the US, the UK, India, Middle East, is similar in many ways. “The difference between each of these markets is more culturally, not in terms of cybersecurity requirements because the common thing that most of these markets are struggling with is they are overwhelmed with cybersecurity products. And I'm still to come across one market which doesn’t have the need for more security products,” he said.

Safe Security was one of the first security vendors that NPCI reached out to, to handle security for the UPI network back when it was launched. And in that right and also being a company that works with multiple payment providers, Modi is of the opinion that the security infrastructure of UPI is among the best on the planet.

“That's something that we should be extremely proud of. Generally, security is seen as a trade-off with convenience. So if somebody's going to war, and you're wearing armor, you want more security, the armor will get more heavy so the convenience will come down. So you always see there has been an inverse correlation between security and convenience. What UPI did was a masterstroke. It increased security and it increased convenience,” he said.

“The convenience went up because you got rid of complex passwords. On the other side, the security also went up which was a masterstroke by UPI. And I think it's something that India should be super proud of, because knowing the infrastructure and the payment capabilities around the world, including China and the US, I would say when it comes to payments, India is easily a few years ahead, because of the interoperability operability of 200 banks in real-time today that over 300 billion people in India today on UPI can actually do,” he said.

Entrepreneurial dream and life beyond

Modi also spoke about his starting days as an entrepreneur and how his parents reacted to his idea of launching a cybersecurity startup. “Their reaction was like ‘this is why you were born.” He feels grateful that when he started out, he had nothing to worry about, not even failure. “I didn't have any responsibilities. There were no mortgages, there was no nothing. And because of that, I could just dream crazy, move crazy fast, and do amazing and crazy things. And that's where it started. My family has always been super supportive,” he said.

Besides being an entrepreneur, Saket is a pianist, holding a degree in Music from Royal College of Music, London. He is also fond of Salsa. “You know the good part is that I thoroughly enjoy not just music, not just dancing, but almost every aspect of life. For instance, whenever I travel, I make sure that I explore the local cuisine and everything in that city. Life's too short not to be enjoying anything and everything you're doing. I love working. But I love great food. I love music, dance, working out and other things.”

Modi also leaves us with a piece of short yet powerful advice to young entrepreneurs: “Take the longer route. It's much faster.”