Is GameStop Stock a Buy After Its Recent Launch of a Digital Wallet for Cryptos and NFTs?

Popular meme stock GameStop (GME) has been gaining momentum again on its latest digital crypto and NFT wallet launch last week. However, given the company's bleak earnings growth prospects and...

By Aditi Ganguly May 31, 2022
This story originally appeared on StockNews

Popular meme stock GameStop (GME) has been gaining momentum again on its latest digital crypto and NFT wallet launch last week. However, given the company's bleak earnings growth prospects and bearish analyst sentiment, will GME be able to maintain this upward price trajectory in the near term? Read on to find out.

Gaming and entertainment products retailer GameStop Corp. (GME) in Grapevine, Tex., entered the limelight in January last year as one of the top meme stocks. GME garnered retail investor attention due to its high short interest volume, triggering a massive buying spree. The stock's price gained in triple digits during early 2021, pioneering meme investing. However, GME has since lost momentum, given its poor financials and growth prospects amid a bearish market. Shares of GME have slumped 46.1% over the past year and 10.2% year-to-date.

On May 23, GME launched its self-custodial Ethereum digital asset wallet that allows users to exchange and store cryptocurrencies and non-fungible tokens (NFTs) across decentralized apps. GME's wallet extension will enable gamers and other users to send, receive and store cryptocurrencies without leaving their web browsers. Also, the company's NFT marketplace is set to be launched in the current quarter.

Following this announcement, GME shares soared 43.2% in price to close Friday's trading session at $137.21. However, given the volatile cryptocurrency market, most analysts have an "Underperform' or "Sell' rating on the stock. 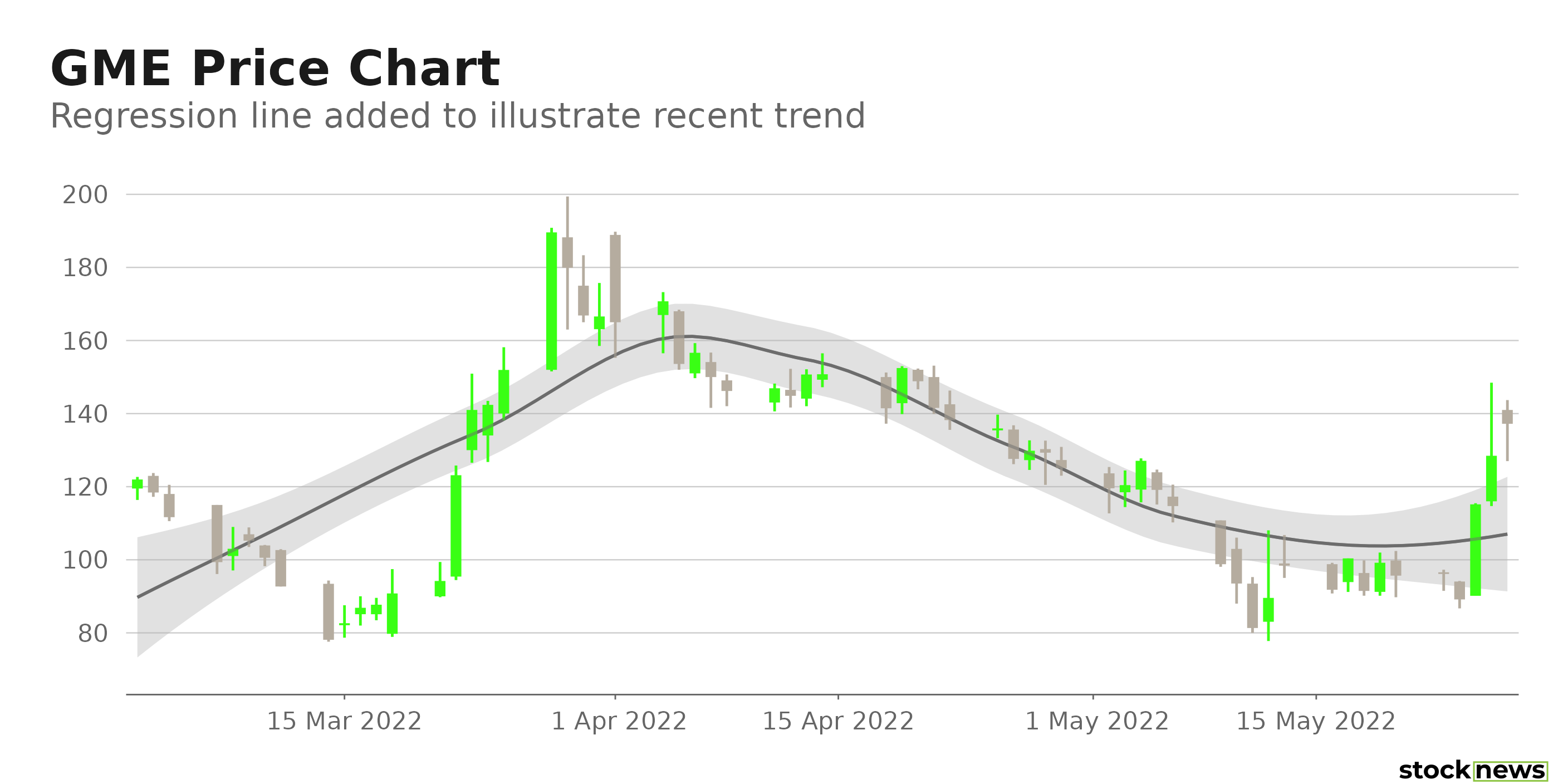 Here is what could shape GME's performance in the near term:

Analysts expect GME's revenues to grow marginally in the coming quarters. However, the company's bottom line is likely to worsen in the near term. GME's EPS is expected to remain negative until at least its fiscal year ending January 2024. Furthermore, the consensus EPS estimates indicate a 170% year-over-year decline in the fiscal 2023 first quarter (ended April) and a 66.1% decline in the current quarter. In addition, the Street expects GME's loss per share to worsen 15.8% year-over-year to $5.28 in the current year (ending January 2023).

GME has an overall F rating, which translates to Strong Sell in our proprietary POWR Ratings system. The POWR Ratings are calculated by considering 118 distinct factors, with each factor weighted to an optimal degree.

GME has an F grade for Value and Stability. The stock's 6.16 forward Price/Book multiple is 147% higher than the 2.50 industry average, which is in sync with the Value grade. In addition, GME's negative 1.01 beta justifies the Stability grade.

Among the 44 stocks in the Specialty Retailers industry, GME is ranked last.

Beyond what I have stated above, view GME Ratings for Growth, Sentiment, Momentum, and Quality here.

Michael Patcher, a Wedbush Securities analyst, has maintained an Underperform (Sell) rating on GME. He stated that he is hard-pressed to find any potential drivers of revenue growth in the near term. Ascendiant Capital analysts have also maintained a Sell rating on GME. Also, the company's profit margins are expected to remain negative in the near term. Thus, we think GME is best avoided now.

How Does GameStop (GME) Stack Up Against its Peers?

While GME has an F rating in our proprietary rating system, one might want to consider looking at its industry peers, ODP Corp. (ODP) and Canadian Tire Corporation, Limited (CDNAF), which have an A (Strong Buy) rating.

About the Author: Aditi Ganguly

Aditi is an experienced content developer and financial writer who is passionate about helping investors understand the do's and don'ts of investing. She has a keen interest in the stock market and has a fundamental approach when analyzing equities.

The post Is GameStop Stock a Buy After Its Recent Launch of a Digital Wallet for Cryptos and NFTs? appeared first on StockNews.com