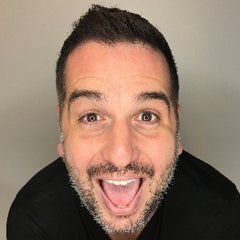 Neil Garguilo is an Emmy winning comedy writer / filmmaker based out of Los Angeles and is the co-creator / showrunner of the Syfy Original animated series Hell Den (Fall 2020).

Over the past few years, Neil has written, directed, and produced comedy series, specials and pilots for networks such as TBS, MTV, truTV, Syfy, Kevin Hart's LOL Network, Funny Or Die and more. He was also the creator / showrunner of the series MOCKpocalpyse, which aired for three seasons on Mark Cuban’s AXS TV.

In 2019, Neil created the Funny Or Die series Brainwashed By Toons where he wrote songs with Jason Alexander, Wayne Brady and Lea Thompson to examine how cartoons have helped normalize bigotry and sexism over the past century. For his work, Neil won an Emmy for Outstanding Original Song and was nominated for Outstanding Writing for a Special Class Series at the 47th Annual Daytime Emmy Awards.

Since 2018, Neil has sold and been hired to write several feature scripts. In 2019, Shaun Redick (Get Out, Blackkklansman) hired him to write the film Tiger Mom which is currently set for production.

On camera, Neil has appeared in all 5 seasons of the hit MTV series Awkward., is the star of his Syfy animated series Hell Den and has worked on several projects with the members of Broken Lizard. You can see him in Super Troopers 2 and on the truTV series Tacoma FD.

You can also see Neil in the feature film Bloodsucking Bastards which he made with his comedy group Dr. God. The film sold at Slamdance, had a limited theatrical release and two years on Showtime. It is currently available on Amazon Prime.

'A Show About Filmmaking From Home w/ Neil Garguilo' Episode 5: 'Directing from a Distance'

Actors and hosts just turned into technicians. This is not part of their training. They (or whomever you're asking to wear more hats) need you now more than ever!

'A Show About Filmmaking From Home w/ Neil Garguilo' Episode 4: 'Keep Morale Up'

Working from home can suck. The only thing worse is being a boss that sucks. So, be great!

'A Show About Filmmaking From Home w/ Neil Garguilo' Episode 3: 'Everything Will Go Wrong'

No matter how much you plan, no one can predict how long your neighbor will work on his Trans Am while blasting '80s hair metal.

Don't worry about the time stamp on the email. Worry about hitting deadlines!

Your back is full! There's no room to carry people in remote production.