These action-sport athletes are taking on business ownership at full speed and finding out it's not always a smooth ride.

Once you get past the stereotype of twentysomethings swigging energy drinks while skateboarding, you start to see the extreme sports industry like any other--filled with executives and venture capitalists wearing Armani and Donna Karan.

After all, NBC, Universal and Sony are just a few of the conglomerates that have jumped on the bandwagon in recent years. Fox Cable Networks' Fuel TV, which covers wakeboarding, surfing, skateboarding, snowboarding, BMX and motocross, is watched in 24 million U.S. homes. And then there's the reality TV shows: motocross pro Carey Hart's Inked, which aired on A&E for two seasons; THE BLOCK, about the hotel chain for snowboarders on the G4 network; and Life of Ryan on MTV, which follows 17-year-old skateboarding phenom Ryan Sheckler, who's signed on for a second season.

In short, the extreme sports industry has become a goldmine, and the prospectors are rushing to make their claims.

The Perfect Fit
That means plenty of opportunity for athletes wanting to turn their passion into a business. And the role of entrepreneur fits them like a ski glove, suggests Nikki Stone, who in 1998 became the first American to win a gold medal for inverted aerial skiing, two years after a debilitating spinal injury. Stone is now a personal and professional development coach in Park City, Utah.

"Extreme sports athletes know how to take risks," says Stone, who used to do things like going downhill off a ski slope at 40 miles an hour and then completing a triple back flip. "They have to put themselves on the edge to accomplish what they want, just as entrepreneurs, if they want to be successful, have to take that extra unknown risk at times." 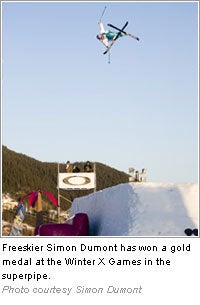 And then there's the fact that many athletes realize they won't be on their boards or bikes competitively for the rest of their lives. "I've always known that athletes don't have the longest careers," says 21-year-old Simon Dumont, a four-time X Games medalist, who recently launched snow apparel company Empire, along with his manager. "So I thought I'd start up a company now. I just figure that action sports is going to another level. Media outlets are getting more involved, and it's only going to get bigger and bigger."

It wasn't until a potentially career-ending injury--two broken arms and legs--that Hart began to focus on his business, Hart & Huntington Tattoo Company. While he recovered, he launched his Las Vegas-based tattoo and apparel company and has grown it to four locations. He also plans to open Wasted Space, a rock nightclub in the Hard Rock Hotel & Casino, in April.

Hart now is ready to get back on his bike and will be competing in the 2008 AMA Supercross season. "I would love to see [motocross] be as popular as the Super Bowl or as Nascar," says Hart. "I think the excitement level's there, and I think there're enough contests to keep people involved. The biggest thing it needs is to grow the TV package. Just like anything, TV feeds the sponsors, which feeds the riders, and I think that's going to be the crucial part."

Girl Power
For extreme athletes--or anyone, for that matter--in search of a target market for their business, catering to women is well worth considering. Just look at the surfing industry. According to the 2006 Surf Industry Manufacturers Association Retail Distribution Study, the surf industry grew from $6.52 billion in 2004 to $7.48 billion in 2006. SIMA attributes the growth, in part, to the industry capitalizing on the "purchase power of women," reporting that women's surf apparel sales increased 32 percent in 2006 to $327 million compared to $249 million in 2004. 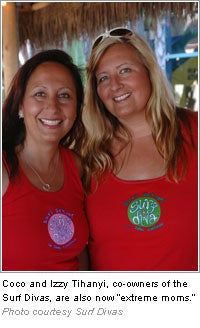 It's a trend that the women behind Surf Diva, a surf school and clothing boutique, invested in more than 10 years ago. "Women are the future of surfing," says Isabelle 'Izzy' Tihanyi, a former competitive surfer who co-owns her La Jolla, California-based business with her twin sister, Caroline 'Coco' Tihanyi.

Since we spoke to them for our first Xtreme Entrepreneur feature almost 2 years ago, they've extended their Costa Rican surf camp to 8 months of the year and are launching an Australian camp in March. Their classes have become so popular that the divas even started a "Guys on the Side" program for males. As Coco says, "Guys like learning from girls." Their current success is a far cry from when the sisters were told they would fail because girls don't surf.

Kim Goldstein, 26, and Jan Kodadek, 29, who co-founded Shredding Betty, similarly are carving out a piece of the female market. Shredding Betty--out to destroy the image of the cocoa-sipping snow bunny--sells gear and apparel to female snowboarders, and while neither Goldstein or Kodadek have gone to the Olympics or are competing on a professional level, they are completely dedicated to the sport.

"I was a skier first," says Goldstein. "I grew up as a kid skiing, and then I started snowboarding 7 years ago." She took up the sport when she went to college in Boulder, Colorado, and later worked at a resort in New Zealand, where she snowboarded every day for an entire season. "It was incredible," says Goldstein, who knew where her future was.

She later met Kodadek, who was just beginning the sport. Since Kodadek's career was in marketing, it wasn't long before the two women decided to start a business. And while women snowboarders may seem like a small sliver of customers to go after, specializing is paying off.

"We're getting a lot of those core customers," says Goldstein. "We're doing very well with selling our smaller, lesser-known brands. We get the customers who know what they want. I wasn't so interested in carrying those big brands that you can find at Kmart."

A Team Sport
Extreme sports may focus on the individual more than, say, football, but when it comes to forming a business, many of the athletes find it beneficial to team up with a more business-minded partner.

Ryan Blair, for instance, owns PathConnect, an umbrella company for other ventures like SkiSpace.com, a social networking site for winter sports athletes. Blair, 30, is not much of a skier, by his own admission. But the company's co-owner, Bode Miller, definitely is.

Blair and Miller, also 30, met a couple years ago and became friends. When Olympian-medalist Miller invited Blair to go skiing in Tahoe, the skiing newbie found himself overwhelmed. "I had zero experience skiing," says Blair. "I had all sorts of questions like, What should I wear to stay warm? What's a lift ticket?"

"See, that's the problem with this sport," Miller responded. "It's too intimidating."

And suddenly Blair had an idea. "To me, as an entrepreneur, if I can find a problem in an industry, I'll start up a company to solve it," says Blair, "and in this particular case, the world's best skier knew of a problem in his industry."

So Miller and Blair formed SkiSpace.com, each of them pouring in equal shares of money and expertise in the venture. Blair has served as the specialist in the corporate side, and Miller, of course, is the skiing authority. "Learning about this business from Ryan has been fun, because it's mostly been figuring out how to bring what I felt people needed to the model that Ryan had perfected. So it was a very interactive learning process," said Miller, in an e-mail from his Blackberry while in Europe at a skiing competition.

It's a business model that is working so far. Miller and Bode launched SkiSpace last year and reports that they'll make half a million in revenue in their first season, breaking even. Blair predicts that with their existing buyers and advertisers, revenues should grow to $1.5 to $2 million during the next skiing season. 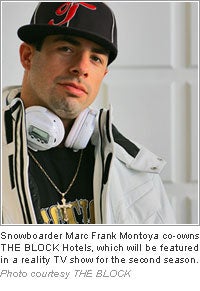 Teamwork also has proved profitable for Liko Smith and Marc Frank Montoya, co-owners of the THE BLOCK Hotels aimed specifically at snowboarders, with locations in Big Bear and Tahoe, California. Montoya was a professional snowboarder when he married Smith's--a hotelier--sister. With Montoya as the face of the brand, they're capitalizing on the growing popularity of snowboarding.

"There will be more snowboarders than skiers on the mountains by 2015," Smith says. "Why? Because it's fun." He adds that snowboarding is easier to learn, and newcomers to the slopes are taking up the sport much more than skiing. The way Smith sees it, "The future of snowboarding is more and better snowboarders, more expensive clothing and a need for a gritty experience that combines technology with high-altitude riding in exotic locations. Kids are now smarter, they want backcountry and new spots that are hard to find."

To make sure the hotel is "providing the best experience in the world for [its] riders," Smith says that they plan to partner with Burton, ESPN, Universal Music and other companies. 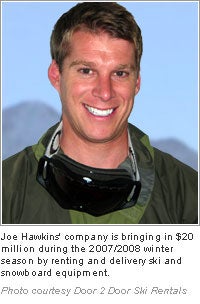 Joe Hawkins, co-founder of Door 2 Door Ski Rentals in Colorado along with Ben Saari, also has recognized the need for partnerships in the extreme sports industry. His company, which delivers ski equipment rentals to people's doors, is now bringing in $20 million during the 2007/2008 winter season. But the co-owners quickly realized that their business model needed some tweaking.

Rather than marketing their services on the slopes and operating independently, they teamed up with Christy Sports, a full-service sporting goods store. They now serve as the new delivery division of Christy's ski and snowboard rentals, a move that has helped them reach even more skiers.

Hawkins believes that operating independently as a small ski shop may become more difficult as the industry changes. "I think there will be a large consolidation within the ski industry," he says. "You can already see that now with large extreme companies like Quiksilver. These companies are buying up smaller ski companies such as Head and Dynastar."

Despite the growth prospects in the extreme sports industry, there are always risks. But that may be part of the appeal. If skier-turned-coach Stone is right, a little uncertainty doesn't bother the extreme athletes who are turning their pursuits into profits: "The biggest thing for an athlete after you retire is you wonder, Am I ever going to feel that rush again?" And there's something undeniably thrilling about knowing that the business you've put your life into might ruin your life--or succeed beyond your wildest dreams.