Get to Know the Temecula Valley

One of Southern California's many playgrounds is also its winemaking capitol. 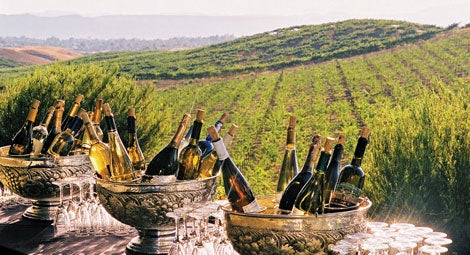 Long known as a place to play by millions of its Southern California neighbors, the Temecula Valley has a new sense of purpose these days. Blessed by legendary sunshine and cool evening breezes, the region is incubating an impressive variety of wines. And not just the wines Americans have commonly know and love. Although Chardonnay, Cabernet Sauvignon, and Merlot are still found in many Temecula Valley winery portfolios, the Mediterranean varieties are quickly assuming center stage. 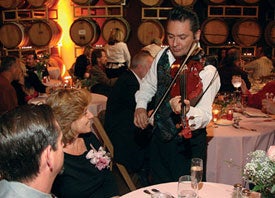 "People are always pleasantly surprised by the wines of the Temecula Valley," Executive Director of the Temecula Valley Winegrowers Association Peggy Evans smiles. The reason, she explains, is simple. The climate of the Temecula Valley is similar to that of the warmest regions of Italy, Spain, and France. Its remarkably long, dry growing season allows grapes to thoroughly ripen before they are harvested. And the word is getting out. "I'm hearing from people in Australia and Georgia. calling to learn more," Peggy reports.

When speaking seriously about the vineyards and wines of today's Temecula Valley, it comes in handy to know a little Italian, Spanish, and French. But just a little. In Peggy's words, "We're serious about winemaking, but not too serious about ourselves." Temecula Valley tasting rooms are warm and welcoming. And the winemakers are often available to shake a few hands.

Joe Hart, winemaker and owner of Hart Winery, is a former teacher who planted his first grapes in the Temecula Valley in 1974. He judges five or six competitions a year, and currently serves as Southern California director on the executive board of Family Winemakers in California. "The Temecula Valley is a small region, and very cohesive in nature," Joe says. "We surprise people, because they think we're here in the desert. But it's not nearly as hot here as people think. We're actually a very versatile region, producing a wide variety of grapes."

When Falkner Winery Owner Ray Falkner and his wife came to the Temecula Valley nine years ago, they were the fifteenth winery on the map. Fifteen more wineries have opened their doors since then and well over a dozen more are in the planning stages. "Temecula Valley is a great emerging wine region," Ray says. "It has widely been overlooked by a lot of wine writers because it's so small. When I came to the region in 2000, some of the wines were great, and some non-impressive. There's been a huge movement to enhance the quality of the wines that are produced. Our wines are significant. It's amazing how many times our wines beat others in blind tastings."

Originally hailing from Canada, Callaway Winery Winemaker Craig Larson finds the Temecula Valley very intriguing. "I think there's a lot of potential here. At Callaway, we're moving toward more Southern Rhône varietals and the soil and climate are perfect. I'm a purist. I want to get the fruit to speak."

Thornton Winery's Winemaker Don Reha spent the first five years of his career at Fetzer Vineyards, and was by all rights a Northern California winemaker until he discovered Temecula five years ago. "I arrived here at the tail end of the Pierce's Disease outbreak," he recalls. "It so eradicated all the vines that had been planted earlier that it actually gave us a clean slate to plant what should be planted in the region." Don says that he used to get teased by his colleagues in Napa and Sonoma for moving down to Temecula. "Then they'd visit and they'd be blown away by the quality of the wines and the area's potential. I don't get much flack anymore."

"Ultimately, focusing on Mediterranean varieties is something we can all do in the Temecula Valley," says Winemaker Jon McPherson of South Coast Winery. Jon, who grew up in the wine production business in Lubbock, Texas, already had considerable expertise in methode champenoise when he settled in the Temecula Valley over 20 years ago. He contends that the region is ideal for growing grapes that are less commonly known to American wine drinkers. "I know that, as we continue to have more wineries in the valley, their emphasis will be on the Mediterranean varieties. And people will try them, like them, and start asking for them."

With a four-generation heritage in the wine business tracing back to Fano, Italy, Robert Renzoni Vineyards Owner Robert Renzoni opened his tasting room door just a year ago. "This region is beautiful and it's only going to get better and better as time goes on here," he asserts. After seriously considering starting a winery in Paso Robles, he recognized his opportunity to build an outstanding Italian winery in the Temecula Valley, and predominately feature Italian varietals. "This is a very viable region economically. All we have to do as an appellation is maintain our farming techniques, produce superior wines, and let the quality of wine produced in Temecula speak for itself."

Wilson Creek Winery Winemaker Etienne Cowper has seen a change in the character of the region since he arrived in 1991. "We need to be careful to maintain our focus on producing high quality wines," He observes. "Our long growing season and nearly ideal climate provide a lot of options on what kinds of grapes we can successfully produce here. I think we are still searching for what will become the signature wines of the region."

After spending many years in the restaurant industry, Nick Palumbo along with his wife, Cindy, started Palumbo Family Vineyards, and sold grapes to many Temecula Valley wineries until Nick started making wine himself. "Our region is kind of like a group of young teenagers who have been brought up well and have a lot of promise, we just have to stay on track and go with what works." Nick is particularly fond of his Sangiovese, and Cabernet Franc, two varietals which he thinks are particularly suitable to the region.

Terri Pebley, who owns Keyways Winery, is the only female winery owner in the valley. She routinely meets with Consulting Winemaker Mike Tingley and her female management team to plan and review the wines and their styles. "We're seeing more serious blush wine drinkers in the tasting room these days," Terri reports.