How to Keep Going When You Feel Like Your Work Sucks

Creating -- building something from nothing and sharing it with the world -- requires a lot of bravery. In the end, it can feel a bit like breaking yourself free.

Einstein was right about a lot of things, but in my mind this sentiment is one of his finest discoveries (OK, the general theory of relativity is pretty good, too).

Creating--building something from nothing and sharing it with the world--requires a lot of bravery. In the end, it can feel a bit like breaking yourself free.

I've chronicled both my own idea prison and some of my attempts to free myself on the blog before.

But lately I've noticed the "prison of your own ideas" sneaking up on me in a new way: It can stop us from learning the kind of new skills that can challenge us and help us grow as people.

Do you know that learning-something-new feeling when you look at what you've created and think your work totally sucks? Or when you feel so overwhelmed by a new concept that it seems easier to just give up altogether?

I wanted to find some help breaking out of that particular prison. Maybe you do, too.

As it turns out, getting comfortable with the concept of productive failure--aka giving yourself "permission to be terrible"--isn't just healthy; it can help you learn, too!

Why we always think our work sucks at first

To me, This American Life host Ira Glass has the definitive quote about that inferior, I'm-never-going-to-get-this-right feeling that often accompanies trying something new: 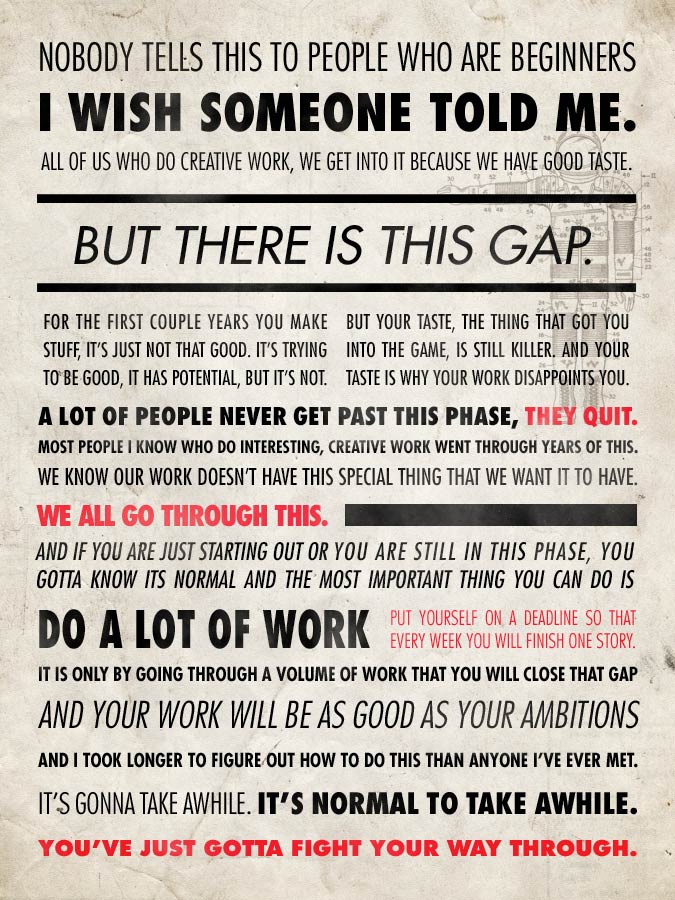 The short version: There's a very good (and hopeful) answer to why this feeling hurts so much--we have great taste!

The downside is that our newly-forming abilities haven't had time to catch up with our superior taste.

So we're deeply, painfully aware of how bad we are.

Give yourself permission to be terrible

How do you combat this? You could stick to just the things that come easy.

You'll be good at them, for sure, but you'll miss the thrill of overcoming giant obstacles and improving yourself so much that you barely recognize the point where you started.

A better method for me has been giving myself permission to be terrible at new things, with the knowledge that this is the necessary first step to stopbeing terrible. 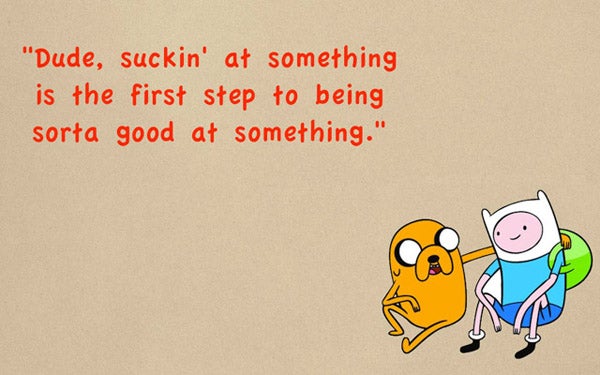 A post I really love on this topic lists a few reasons why this approach is preferable:

And even though the terribleness could last quite a while, keep going and practice truly does makes perfect. (Or at least less sucky, after a while.)

A great visual exploration of this blog post draws out that well-known aphorism in such a tactical way: 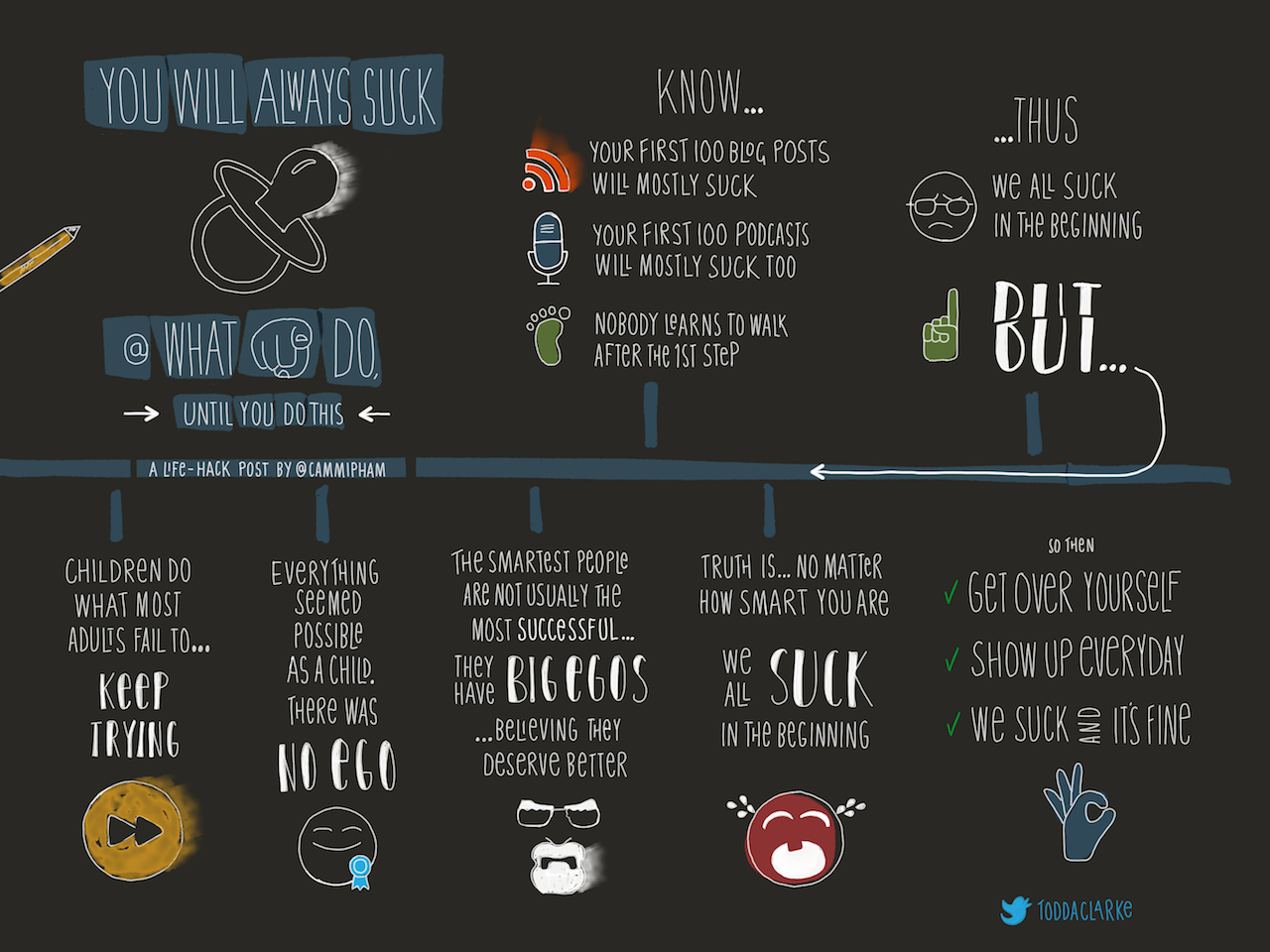 The really good news about feeling totally in over your head when it comes to learning something new is that it could be surprisingly good for you--and even help you learn faster!

Manu Kapur, Professor of Psychological Studies at the Hong Kong Institute of Education, has pioneered the cool and counterintuitive idea of productive failure.

To learn this way, students are presented with unfamiliar concepts and asked to work through them right away, without being taught the method or solution.

Research has shown that this method leads students to significantly outperform those who learn through traditional instruction and problem-solving.

Kapur's theory is that leading students to dig deep and discover:

actually activates parts of the brain that trigger deeper learning.

So while this feeling isn't very fun (Kapur notes that most of the students felt low confidence after the exercise), it can be super productive.

To get scientific, what we're really talking about here is a growth mindset.

Carol Dweck, a researcher at Stanford University and author of Mindset: The New Psychology of Success, explains the difference between the two mindsets using students as an example:

"In a fixed mindset, students believe their basic abilities, their intelligence, their talents, are just fixed traits. They have a certain amount and that's that, and then their goal becomes to look smart all the time and never look dumb.

In a growth mindset, students understand that their talents and abilities can be developed through effort, good teaching and persistence. They don't necessarily think everyone's the same or anyone can be Einstein, but they believe everyone can get smarter if they work at it." 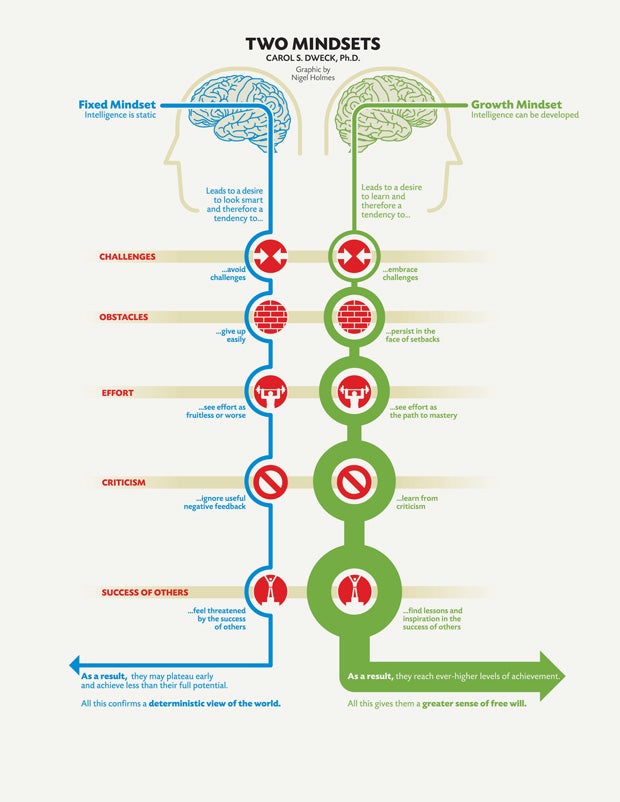 Because of Dweck's studies, we know that much of your success hinges on whether you believe that your abilities can be developed versus believing that they're fixed.

Those with a growth mindset can handle sucking for a while. Because they focus on their ability to change and grow--as opposed to those with a fixed mindset--they can see the light at the end of the tunnel and think on a time when they will see improvement.