Still Riding the Wave of Success

We talked with twin sisters Izzy and Coco Tihanyi to find out how their business has changed since we featured Surf Diva in our first Xtreme Entrepreneurs profile.

January 15, 2008
Opinions expressed by Entrepreneur contributors are their own.

For twin sisters and business partners Izzy and Coco Tihanyi, change has been a very good thing. In the two years since we last spoke with them, the owners of Surf Diva--a surf school and line of surf apparel for women and girls--have seen their dreams of expansion become reality. Their Costa Rican surf camp now is being offered for 8 months of the year, and their Australian camp makes its debut on March 9.

But despite substantial growth, Izzy and Coco are still hanging loose. "We've always dreamed big," says Izzy. "This is our dream. We're amazed by it."

This year, the divas celebrate 12 years in business. It all started when Izzy, short for Isabelle, began surfing at 8 years old. While studying at the University of California, San Diego, she began surfing competitively and teaching the sport to others. Coco, short for Caroline, shares the same love for the ocean, though her background is in business and communication. 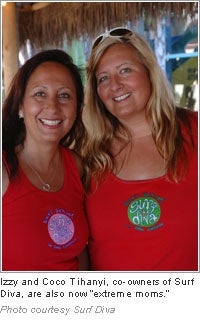 The sisters have combined their passion for surfing and educating others about ocean preservation with their La Jolla, California-based surf camp and clothing boutique. Though Izzy and Coco won't release specific sales figures, they say they've increased sales by about 15 percent each year.

The surfers now are focusing on their boutique and developing new programs and other camp locations, as well as corporate team building events that draw employees from across the country. In California, they're planning on expanding Surf Diva into the Los Angeles area, perhaps Malibu or Santa Monica, by summer 2008. And several new items are making their debut at the shop, including a new collection of rashguards and "booty shorts" to prevent lost bikini bottoms.

Both sisters say it's important for them to be careful about the opportunities they get involved with when it comes to franchising in the future. "We're in the process of evaluating different opportunities," says Coco. "It's a lengthy process. We're talking with a company in Japan, but we're in no rush."

Lately, the divas have noticed an interesting trend creeping into their lessons--men. "Women are the future of surfing!" exclaims Izzy. "Now guys are coming to us for lessons." Surf Diva has had so many requests that they've started a program geared toward men called "Guys on the Side," which offers private and group lessons for boys and men. "Guys like learning from girls. They buy certificates for their dads and boyfriends," says Coco.

As for the men in their lives, Coco and Izzy are both happily married with children. Izzy recently welcomed her first child, daughter Annabelle, while Coco is mom to 3-year-old Diego. "We're extreme moms," says Coco.

Being sisters and business partners after 12 years means plenty of time spent together, both at work and at play. "We don't want to separate [work and personal time]," says Izzy. "We love what we do; it's fun to bring it home."

No, Most Remote Employees Aren't Working on the Beach. This Survey Reveals Where They Actually Live.