If you manage a brand's Twitter account, chances are you're not interacting as much as you could be. And that's not a good thing.

If you manage a brand's Twitter account, chances are you're not interacting as much as you could be.

Simply Measured took a look at 98 of the top global brands on Twitter and found some eye-opening information.

During the final three months of 2013, 98 of Interbrand's top 100 global brands tweeted at least once and the average company tweeted 12 times per day, according to data from Simply Measured, a social media analytics provider. However, the report also found that 54% of these Interbrand companies send less than one @-reply per day.

You know who uses the @reply function? Pizza Hut. The company accounted for more than 68,000 @replies--more than half of all the replies sent by the top brands.

According to the study, the majority of brands average around 10 tweets per day:

When it comes to engagement, it looks like the sweet spot is 750,000 to 1 million followers, which get the highest amount of engagement per post: 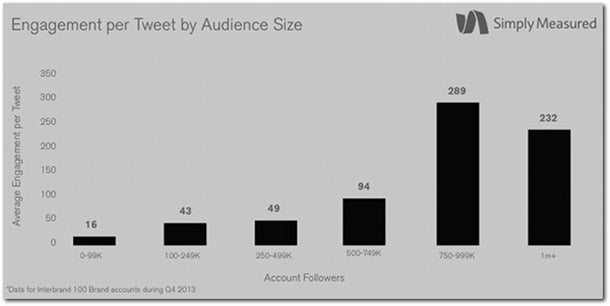 Still, the biggest reveal in the study was the lack of replies from brands. According to the study, "While top brands are dedicating resources to brand promotion, many aren't engaging with users in a one-on-one capacity,"

To receive a copy of the full report, click here.

Kevin Allen is a contributor to PR Daily.