Oregon entrepreneur helps would-be entrepreneurs take their ideas for a spin before sealing the deal.

By David Ferrell
November 15, 2010
Opinions expressed by Entrepreneur contributors are their own.

Brian Kurth's road to nowhere was the car-clogged John F. Kennedy Expressway in Chicago. His daily commute lasted two to three hours. He stared at brake lights and daydreamed about giving up his boring marketing job for a wholly different line of work -- maybe as a dog trainer or a professional tour guide.

"I was burning out," Kurth says. "I was stuck in traffic one too many days, feeling like, 'My God, my life is passing before me.'"

Trying to make changes, however, brought only more frustration. He had a hard time finding a way to explore new fields and see what he liked while still working a day job. "There was nothing but mentorship programs for troubled teenagers and 20-year-old college students," says Kurth, 44. "There was not a single mentoring program for the fortysomethings, the fiftysomethings or the sixtysomethings."

What he did, eventually, was to address the void himself by creating VocationVacations, a company that exposes people to alternative careers in one-, two- and three-day getaways. Kurth founded the service in 2004 and has steadily expanded his network of vocational mentors to 30 states. The mentors -- all working professionals -- offer one-on-one training in 185 careers, from archeology to sports play-by-play announcing. Clients learn directly from brewmasters, make-up artists and television script writers -- a few of the most popular choices, Kurth says. The more adventurous step far beyond the 9-to-5 world to try bison ranching and guiding white-water rafting tours.

"You can be a total novice in whatever it is," says Kurth, who took a circuitous route to forming the company. He left his Chicago marketing job, got laid off from a dotcom, and traveled by car for six months, mainly in Colorado and on the West Coast, asking people about their careers. After finally settling in Portland, Ore., he went into marketing for the wine industry. He also launched VocationVacations, a moonlighting business based online. The concept proved so popular and rewarding that after a year he gave up the wine job.

"The feel-good factor is huge," Kurth says. "It's not that we're changing people lives, but we're giving them a tool that they could never, never, never get in a classroom."

Clients -- or "vocationers," as Kurth calls them -- typically pay a fee of $600 to $1,100 per person or more, and are responsible for their own additional hotel and travel costs. They go where the training is offered. For private help with guitar making, they head for Nashville, Tenn. For learning landscape architecture, they fly to San Diego. For studying horse breeding, they visit a ranch in Portland or another in Cape Vincent, N.Y.

Although he declines to release specific numbers, Kurth says "thousands" have taken the excursions, a large share of them baby boomers looking for encore careers. "They are not the Club Med people who want to sit on the beach," he says. "They now have the flexibility to do something they really want to do."

Many clients are in their prime working years, but burned out or newly laid off. A few are young people, trying out a fantasy job, such as working for a racing pit crew, before committing to conventional careers. And some are seniors, also experimenting for fun.

"It's the path not taken," Kurth says.

Diane Milczarek, 56, is one of the shining success stories, a woman who was dissatisfied with her school-district office job and took an interest in making soap. A two-day, $950 mentorship at Bramble Berry, a popular soap-maker in Bellingham, Wash., gave her confidence to quit and open her company, Garden Lane Soaps, in Corralitos, Calif., near San Jose.

"It was something I really needed," Milczarek says of the training. She turned the trip into a five-day vacation, came home and immersed herself in reading about soap and honing a business plan. "I quit my job July 15, and three months later I launched." 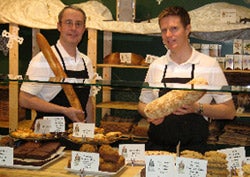 Kurth does not encourage such abrupt career changes. More typically, people take well over a year or two to prepare. The brief mentorships are just one aspect of the long learning process, and clients are just as successful if they can rule out a career change that would be unwise for them, Kurth says.

Still, he takes pride when "vocationers" learn enough to go forward, as George Kelley and Paul Holje (pictured left) did. Kelley, an air-traffic controller, and his partner, Holje, an architect, yearned to open a bakery and spent three days in 2005 visiting Pearl Bakery in Portland.

"We got to see all aspects of the operation," says Kelley, who is now 48. "We got to work the production side, seeing the commercial production of breads, pastries, cakes, cookies and different lunch items for the cafe, and we saw the business side as well -- finding qualified employees, how to do accounting, purchasing." 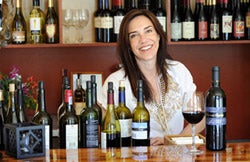 Another client, Beth Lemke, opened her own wine bar, A Grape in the Fog, last spring in Pacifica, a coastal burg south of San Francisco. She praises Kurth's genuine concern for the people who come to him.

"He's got that special something," Lemke says. "I don't get the sense that he just found a way to make money. I get the sense he's in it to help a lot of people."

For those who cannot afford the time or cost of traveling, Kurth has written a book, Test-Drive Your Dream Job: A Step-By-Step Guide To Finding And Creating The Work You Love, released in 2008. He likes to think that VocationVacations reflects his "all-American" ideals.

"You boot-strap yourself," he says. "It's so great to hear that people are using this as a wonderful tool. There are days I'm just smiling from ear to ear."