Amazon employees are confronting issues like job security and safety.

By Nicole Lee
July 15, 2019
This story originally appeared on Engadget

Today, Amazon will start its fifth annual Prime Day, which has been expanded to 48 hours this year. Designed to enlist (and keep) Prime members, it is the company's biggest shopping event of the year -- on the same level as Black Friday -- with extensive discounts and deals across the entire site.

At a time when Amazon would likely prefer that all its employees hunker down to meet increased demand, a group of warehouse workers in Shakopee, Minnesota are going on strike. It isn't the first time the workers in Shakopee have raised their concerns. But it will be the first major work stoppage event for Amazon in the US and could be a harbinger of things to come.

In 2016, the fulfillment center in Shakopee opened and Amazon heavily recruited from the surrounding East African Muslim immigrant population at the time. In a report last year, the New York Times tells a story of how a worker by the name of Hibaq Mohamed made requests for prayer breaks. Even though they were granted according to state law, she was still expected to meet her daily quota of packing 230 items per hour despite the reduced time. But instead of sitting idly by, she and a group of workers organized to complain. They were one of the first worker groups in the country to stand up to Amazon and, eventually, to sit in negotiations. 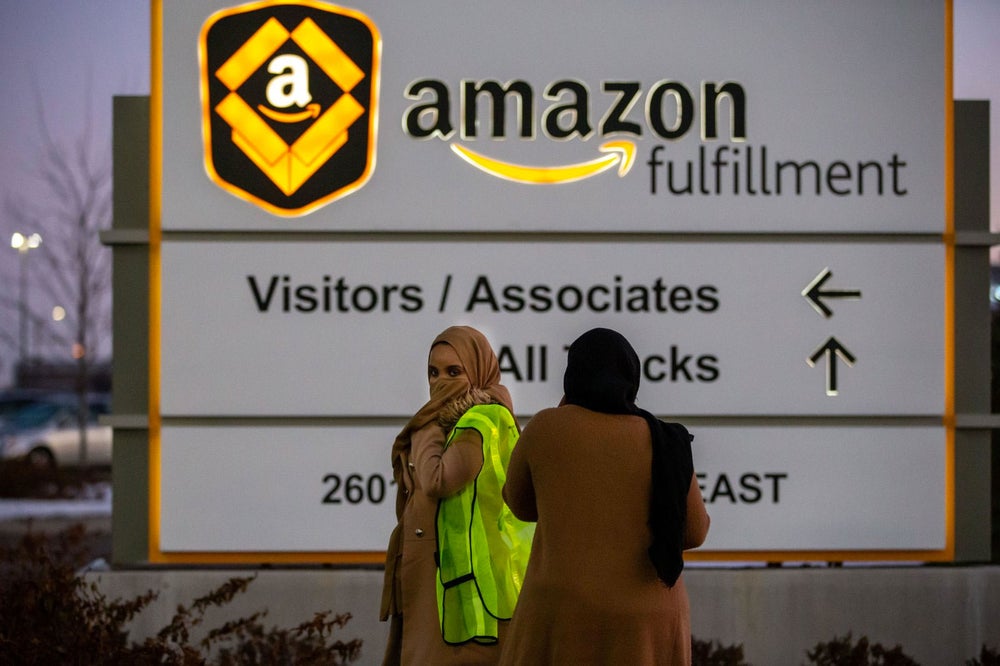 That was just the beginning. When Amazon canceled a commuter bus to a Minneapolis neighborhood, some started a petition to reinstate it. When Prime Day fell during Ramadan, the workers asked for a lighter workload to accommodate their fasting schedule. The group also received help from the Awood Center, a non-profit that aims to help East African workers. The Awood Center helped organize them and educate them on worker rights.

"Issues like these would pop up, and people would react," said William Stolz, a worker at Amazon's Shakopee warehouse, to Engadget. Stolz is one of the workers organizing the upcoming strike on Prime Day. He is a "picker," and his job is to pick an item up, put it in a tote, which then goes down the line to get packed. He's required to pick at least 320 items an hour to meet his quota. "I usually have to go faster than that though, just to make sure I go enough over to hit my numbers for the week," he said. "It comes down to scanning like one item every eight seconds."

The group eventually got to a point last September and October where they had two big meetings with Amazon management. They raised concerns over the speed of work, the physical and mental toll they deal with on a daily basis and the assurance that the company was taking safety and injuries seriously. "We basically just wanted job security," Stolz said. After a month, Amazon management had come back to them without committing to any substantial changes. It did offer a few compromises, like requiring a general manager and a Somali-speaking manager to agree on any firings. But the group deemed that insufficient. 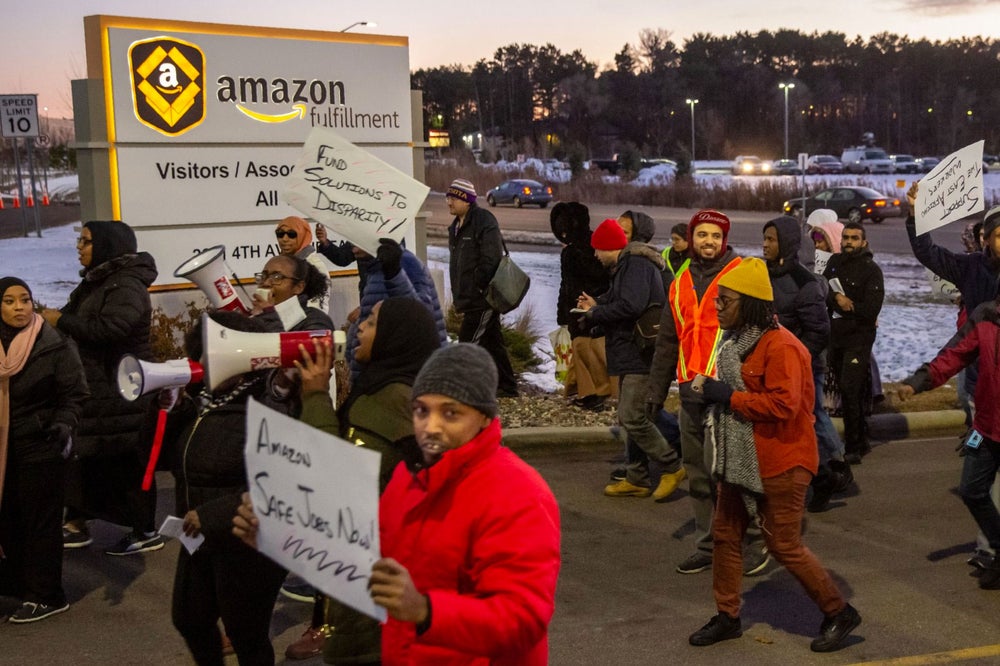 This isn't the first time Amazon has faced accusations about improper working conditions. A 2015 New York Times exposé described Amazon as a "bruising workplace." Multiple reports claimed that Amazon warehouse jobs are grueling and extremely taxing, both physically and mentally, due to ever-increasing demands. Journalist James Bloodworth wrote that there were workers who peed in bottles to avoid taking bathroom breaks. A Verge report revealed that "hundreds" of workers in a Baltimore facility were fired for not meeting productivity levels. Amazon, for its part, has denied many of these reports, insisting it is a "fair and responsible" employer.

Yet, thousands of workers in Europe have gone on strike in the past to protest increased work hours, the reduction of bonuses and an unhealthy work environment. That hasn't really happened much in the U.S. -- Amazon workers in Europe are unionized, while U.S. workers are not -- but the workers in Shakopee could help change things.

With the help of the Awood Center, they held their first major protest in December. It drew hundreds of people, including Minnesotan Representative Ilhan Omar, the first Somali-American elected to Congress. "Amazon doesn't work if you don't work," she said to a cheering crowd, according to a Gizmodo report.

"It felt super powerful," said Stolz. "We were just really proud of the action we took that day."

Unfortunately, Amazon hasn't quite responded the way the group had wanted. The company did offer a few concessions, like more prayer spaces and air conditioning. But much of Amazon's actions rang hollow. Amazon CEO Jeff Bezos, for example, donated $2.5 million to a Minneapolis nonprofit to help homeless individuals and families in the days prior to the December rally. The Somali community appreciated the donation, but that wasn't the point of the protest. "They're giving out all these donations, but they're ignoring the real issues we raised in the warehouse," said Stolz. 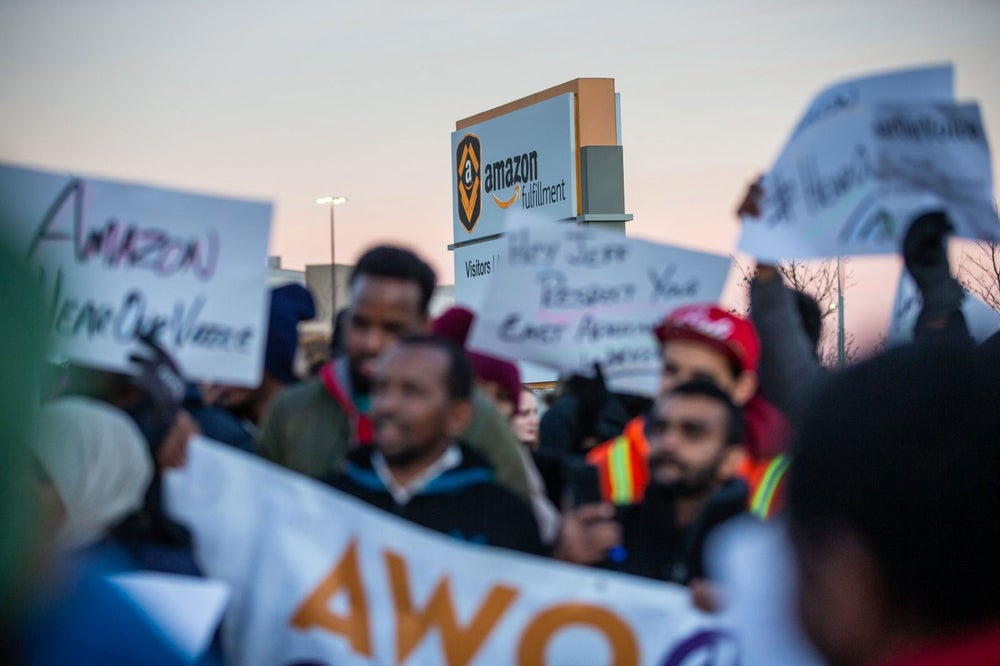 A group of 30 workers in the stowing department held another three-hour protest later in March, partly to request less punishing standards for when they made errors. Amazon's solution? Newer machines that may reduce the chance for errors, but it also didn't really address worker concerns.

"People ask questions like 'Why don't you do the whole day', and the reason is because Amazon has a time off system that automatically deducts unpaid time, like if you have to leave early to visit your grandma," said Stolz. It appears that Amazon considers those hours protesting as part of the "unpaid time" -- it deducted them from the protesters in March -- which could be a problem. Amazon workers get 20 hours of unpaid time every three months (up to a max of 80 hours), and if they go under that amount, that is grounds for dismissal.

And that may very well be illegal. As Seattle University law professor Charlotte Garden tells Bloomberg: "It's a violation of labor law when an employer punishes workers for striking, and one way of punishing workers for striking is to take some of their leave away." 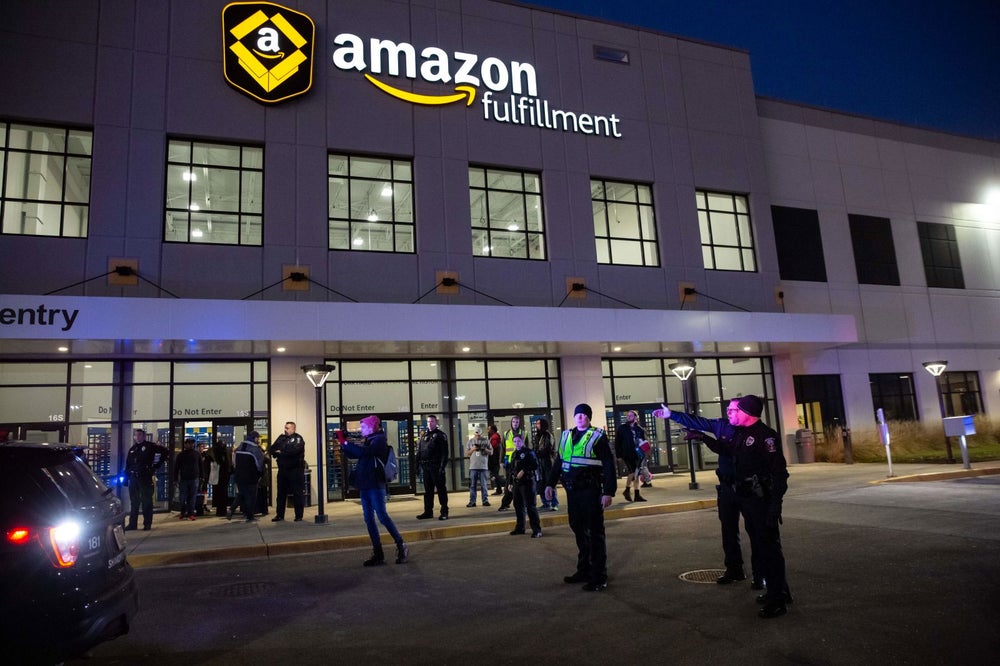 As for what the workers want, it's the same as it was before: less pressure. "The biggest ask we have is to have Amazon reduce the speeds that we have to work," said Stolz. "It is physically, mentally exhausting. That leads into other issues like injuries, since you have to do things very fast, and with repetitive motions, all day long."

There's also the issue of job security. Not only because these sorts of jobs aren't the kind people can do for long periods of time, but because Amazon has been outsourcing them to temporary workers. "For 2019, all of the new hires in the building have been using temp workers rather than direct hires," said Stolz. "The temps are doing the same exact job as us, but they don't have the same job security." Temps, he said, are often demoralized, and told things like 'You're replaceable.' It creates a second class of workers," he added.

When Stolz asked someone in Amazon's Learning Department, which is in charge of training new hires, why Amazon was only hiring temps, he received a rather chilling answer. "His exact words to me were 'To increase turnover in the building,'" said Stolz. "Can you believe that? My eyes widened, I was so surprised. The person began to rephrase and backtrack and said it was to 'get new energy in the building'. Right. Sure."

Amazon told Bloomberg that around 90 percent of the employees at Shakopee are full-timers, and that some temps do get promoted to staff. Still, Stolz said that they should just cut out the temp part of it. "Just let people come on as a regular worker," he said. 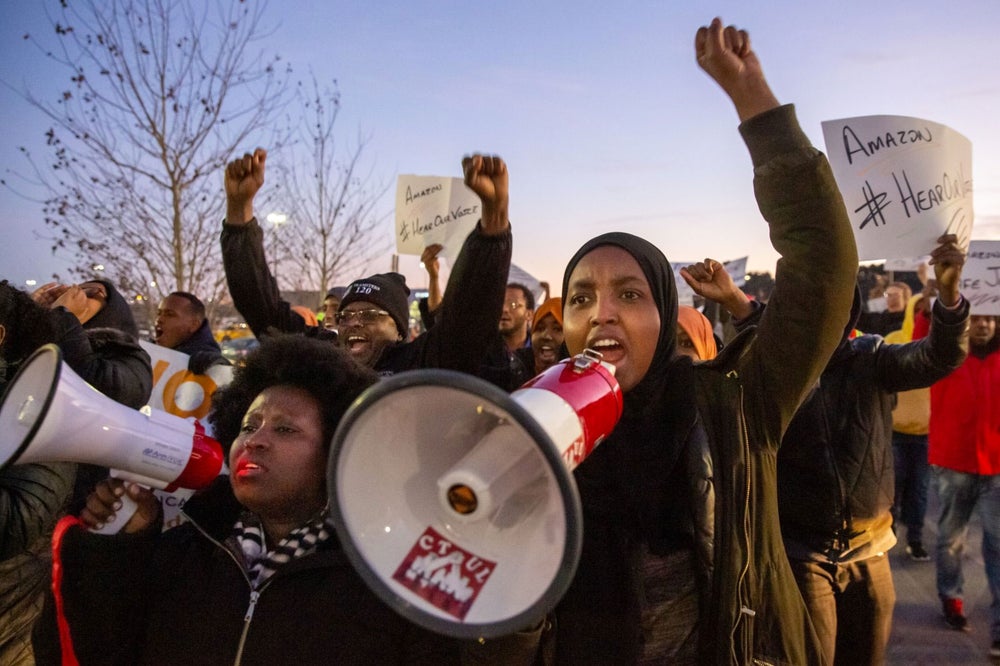 In response to the upcoming Prime Day worker strike, Amazon released a statement that it's already offering what workers are asking for: "We provide great employment opportunities with excellent pay -- ranging from $16.25 - $20.80 an hour, and comprehensive benefits including health care, up to 20 weeks parental leave, paid education, promotional opportunities, and more." It also encouraged the public to take free tours of its facilities.

Some of these changes, however, didn't come about until Amazon came under fire from politicians such as Vermont senator and presidential candidate Bernie Sanders, whose "Stop BEZOS" act spurred the company to raise its minimum wage to $15 an hour. Which sounds good, but in doing so, Amazon took away employee monthly bonuses and stopped issuing new stock grants to employees. Some say that this actually leads to less pay overall.

As for the open invitation to fulfillment center tours, well, Stolz said that appears to be a way to sway public opinion. "I think they realize that they're getting some negative attention around some of the negative stuff they're doing," he said. "But I would just ask the general public if they think that, you know, an actual Amazon worker is in a better position to talk about what the workplace conditions are, versus Amazon's paid tour guide."

Truth be told, a single warehouse going on strike will likely not affect Amazon's bottom line very much, even if it does happen on Prime Day. But it's a sign of a much larger shift in how Amazon workers across the country are attempting to organize for a better workplace. Some workers in the Staten Island warehouse are trying to unionize, for example, as are Whole Foods employees. As Amazon introduces more automation and attempts to retrain its staff, the need to negotiate better working conditions might be more important now than ever. 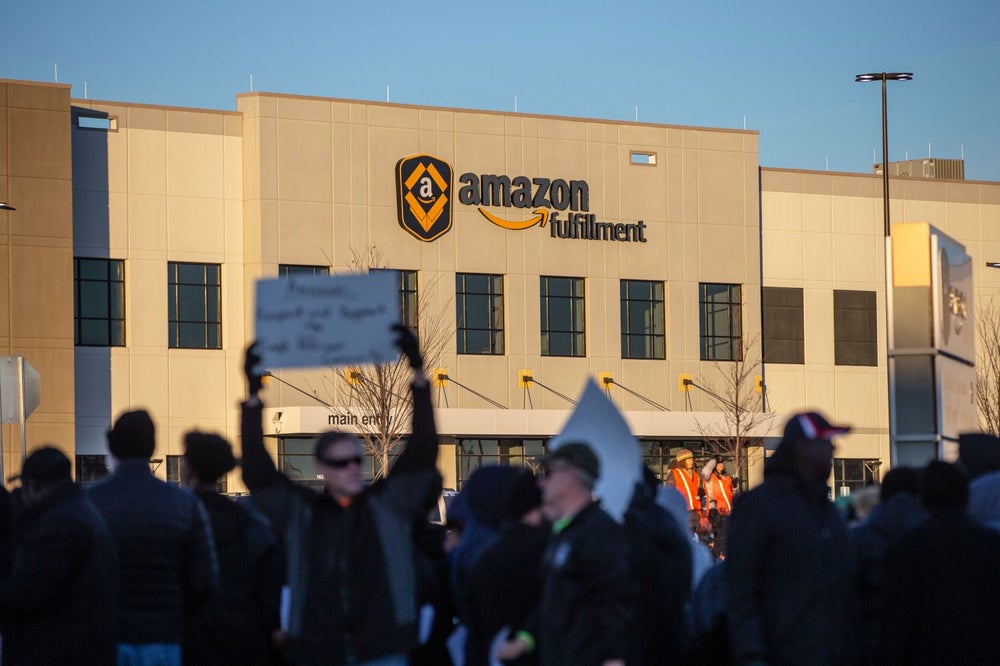 Several Seattle-based Amazon engineers, who are part of the Amazon Employees for Climate Justice, plan to join the strike in solidarity. In a statement to Engadget, the group said, "Lending our support to our coworkers in MN is a natural part of our climate justice priorities. We cannot create a sustainable, long-term approach to addressing the climate crisis without addressing the structural racial and economic inequities that are part of our system of extraction -- of energy, material, and human labor -- that has caused the crisis."

The group also compiled a Medium post containing many supportive messages from fellow tech workers about the situation in Minnesota. They include: "The treatment of FC [fulfillment center] workers is a source of shame to me as an Amazon employee," "When Jeff Bezos is worth over $100B, it's totally unfair that you are working in subpar conditions" and "The absolute bare minimum requirements should be a safe workplace, and as one of the most valuable companies in the world Amazon should also be providing fair opportunities for promotion and full-time work." While several of the quotes are anonymous, a large chunk are not, showing that Amazon employees are not afraid of speaking their minds.

"The workers are asking for jobs that are safe and reliable, respect on the job so workers can get promoted, and an end to retaliation," said Josh Keller from the SEIU Minnesota State Council, who spoke on behalf of the Awood Center to Engadget. "Workers have been saying often 'We are humans, not robots,' which sums up well that they want to be respected and treated in a way that honors the hard work they do and the wealth they bring in for Amazon."

"Amazon is one of the richest companies in the world," Keller continued. "They can and should do better than being 'competitive.' They should lead, and that means respecting their workers and sitting down to make sure these jobs are safe and ones where people can stay and grow."