This Artist Used Tech to Control Sperm With Her Mind

By Evan Dashevsky
June 23, 2017
This story originally appeared on PCMag

Art gives us the power to communicate without words, but it's entirely dependent on the mediums around us -- video was not an art form in the 1800s because it didn't exist, and there aren't many people making cave paintings these days.

We now live in an era when new platforms and mediums pop up regularly, which brings up the question: How does art react to this unstoppable, rapid evolution?

That's the question transdisciplinary artist Ani Liu is attempting to answer. She's a research assistant with MIT's Media Lab, where she creates research-based art that explores the intersections between science, culture and emerging technologies.

One recent piece by Liu -- which combines the aesthetic, the political and the technical -- has received a lot of media attention. Mind Controlled Spermatozoa is the aptly named installation in which Liu uses technology to control the motion of live sperm with her mind (yup).

In the project, Liu dons a commercially available EEG headpiece that monitors electrical activity on her scalp and translates that activity into a digital signal. The signal (i.e. Liu's thoughts) prompts a change in electronic charge around a microscope holding a sample of live human sperm. Mammal sperm exhibit a phenomenon known as galvanotaxis in which they change direction depending on the electro-magnetic fields in their environment. In a very real sense, Ani is able to control sperm with just the power of thought. 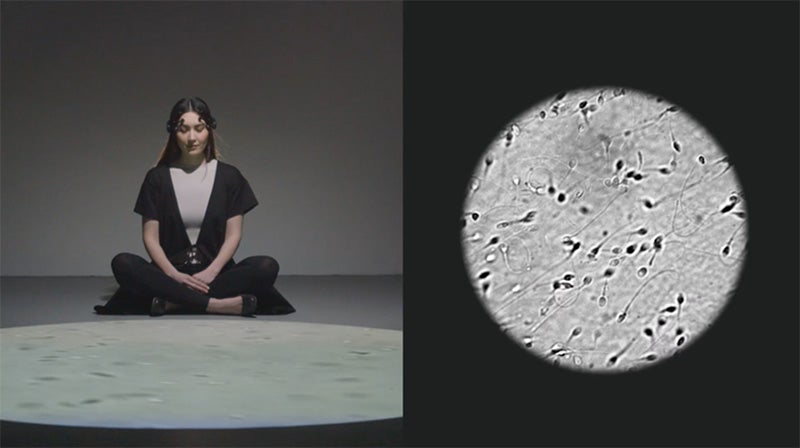 "I was taking a class called 'how to grow almost anything' and I was learning about galvanotaxis and I was like 'wow, I wonder if that would work with sperm and what would be the implications of a woman controlling sperm in such a way?'" Liu explained when she stopped by PCMag's offices to shoot an episode of PCMag's interview series, The Convo.

In light of recent political events, the subtext of the piece should be pretty clear. Regardless of anyone's personal politics, it's interesting to note that Mind Controlled Spermatozoa would be impossible to create 20 years ago before commercially available EEGs were around; it was born from a cross section of mediums that only exist today.

Similarly, in her Botany of Desire project, Liu utilized cutting-edge botanic research to "design" plants that interact with humans on an emotional level. Notably, Liu and her team at MIT engineered a plant that bloomed where she kissed it. That might sound like some IRL ancient Greek goddess magic, but it's magic based on contemporary science. Using modern bioengineering techniques, Liu created plants that react in predetermined ways when they encounter chemicals in her lipstick.

Works like Botany of Desire inevitably evoke questions about contemporary phenomenon like genetic engineering and modified organisms. These are questions an artist of a previous era would never even think to ask, and certainly wouldn't know how to explore.

In a world full of new science and technology, it's increasingly difficult for society to contemplate what it's doing to itself before it's already doing it. This trend will only accelerate, though, so today's artists should consider it their duty to utilize STEM in their work.

The Convo is PCMag's interview series hosted by features editor Evan Dashevsky (@haldash). Each episode is broadcast live on PCMag's Facebook page, where viewers are invited to ask guests questions in the comments. Episodes are then posted on our YouTube page and available as an audio podcast, which you can subscribe to on iTunes or the podcast platform of your choice.

What Are the Most Important Priorities for a New SEO Campaign?