What Adults Can Learn From Teenage Ecommerce Entrepreneurs

By Sherice Jacob
May 12, 2015
This story originally appeared on KISSmetrics

When we were kids, Monopoly money was the closest we ever felt to being rich. There was something about that stack of fake money that could build empires, and tear them down. Ohh, how good it felt to have that kind of buying power – if only for a moment in a board game.

Fast forward to today, and technology has enabled kids and teens around the world to make money online – some earning more than their parents. These bright young entrepreneurs are not only learning the skills it takes to start a business, but also offering up some sage advice along the way that we can all take a moment to learn from. 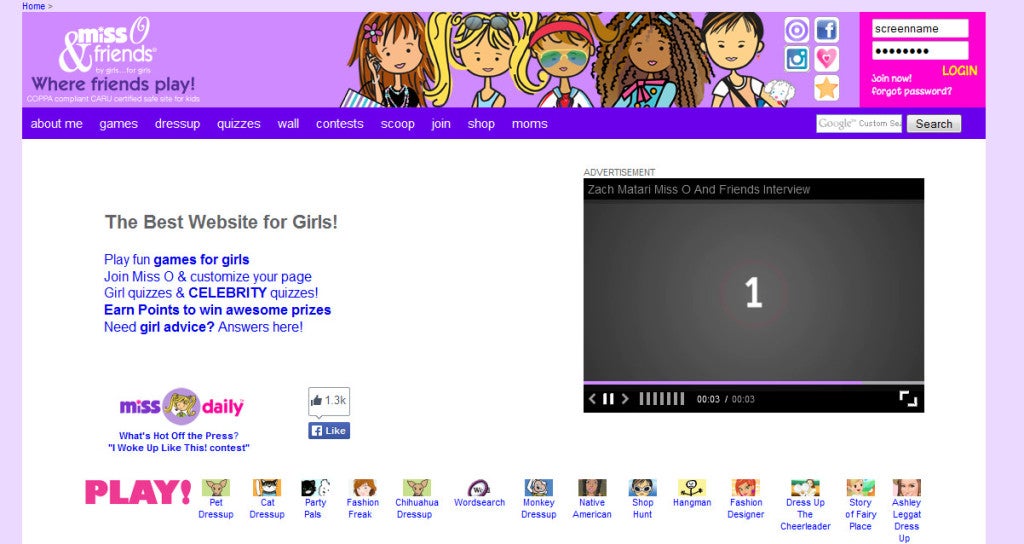 Miss O and Friends is a social networking site geared towards tween girls. Founded by Juliette Brindak at the age of 10, Miss O was designed for girls just starting middle school or junior high, who are going through that awkward phase of life where boys enter the picture, cliques start to form and bullying becomes a fact of life.

Miss O was designed to not only give girls a place to hang out and share their stories, but also keep up with the latest on celebrity gossip, quizzes and games. Miss O and Friends has also launched a line of books and is currently valued at over 15 million dollars.

According to Brindak, your business plan shouldn't be set in stone. The site originally started with a few simple flash animations and articles, but has since grown to include celebrity meet and greets, concerts and advice columns. Have a business plan as a guide, but don't rigidly stick to it, or you'll miss out on new opportunities as they happen.

Brindak tells readers "the goal for the site was, and still is, to help young girls build confidence and self esteem." As the CEO of her own social network and book empire, Brindak is keen on "find[ing] new ways to engage girls, to generate revenue and new outlets that are appropriate for Miss O and our community." 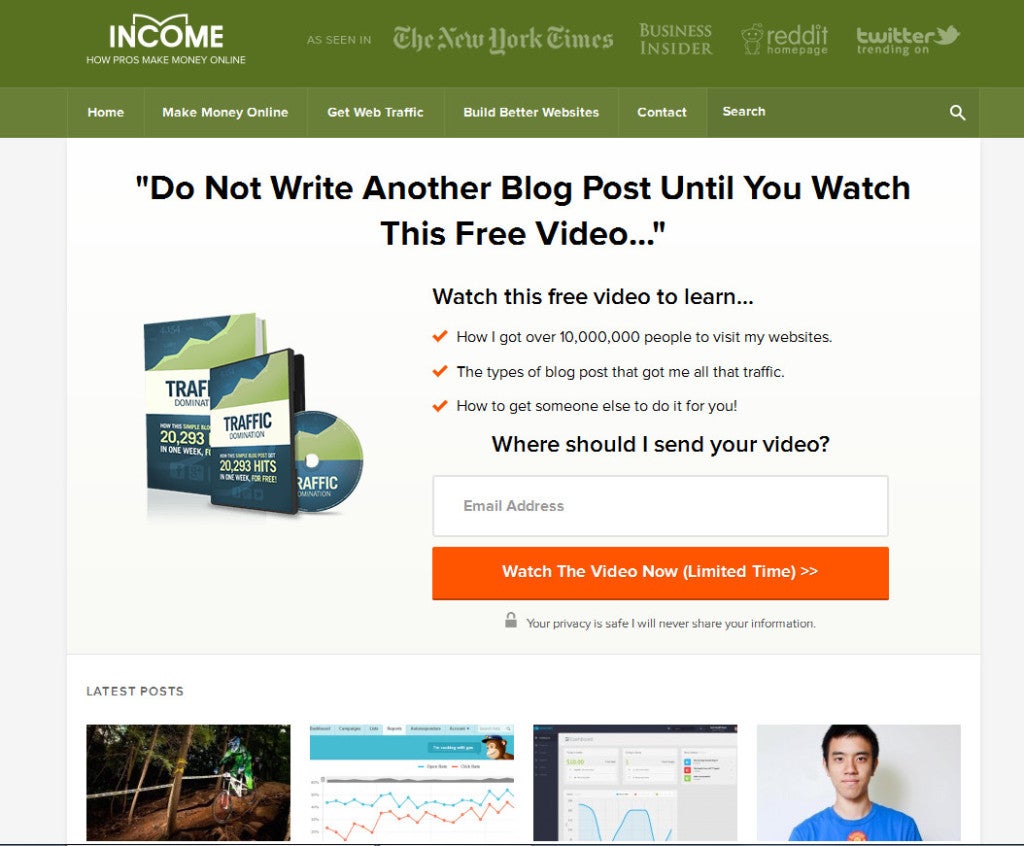 Imagine being 16 years old, dyslexic, and dropping out of high school while still living at home with your parents. Your prognosis for success as a blogger might not be the best, but that was life for Michael Dunlop, a British student who foundedIncomeDiary.com. Unlike Miss O and Friends, Michael's business plan comes straight off the top of his head, and he considered his life as an entrepreneur to be a bit of a rollercoaster.

When it comes to following his own advice though, Michael is spot on. He tells people looking to start their own business to "just do it… plenty of people [will] put you down and things will go wrong, just move on and don't worry about it. Don't spend money you don't have. So many people will rush out and spend their earnings – save it for a rainy day, invest it into your business and make sure to pay your taxes!" 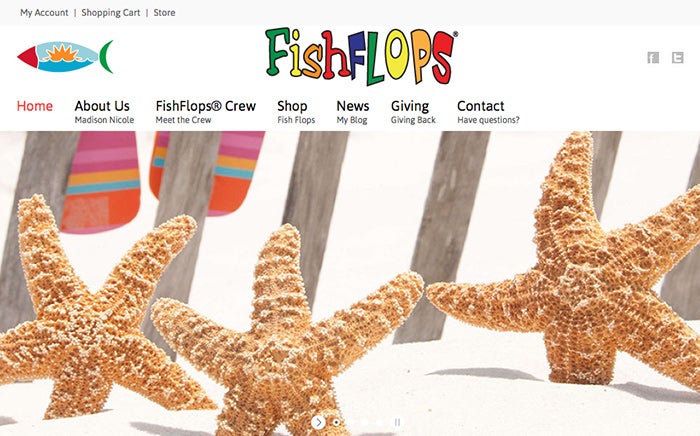 At 8 years old, Maddie Robinson drew a picture of a pair of flip flops and added sea characters to them. Proud of her work, she showed the picture to her dad, saying, "Look dad! Fishflops!" Dad, being no stranger to the apparel industry, registered the domain FishFlops.com.

Fast forward a few years, and Madison wrote a letter to upscale retailer Nordstrom, introducing them to her product. They placed their first order and FishFlops appeared for the first time in over 60 Nordstrom stores.

Yahoo picked up the story of how a (then) 15 year old got her product into Nordstrom, and the rest is history. That set into motion an avalanche of emails and questions asking "where can I get these?!" Their custom sea creature designs and LED lights built into the sole made them hugely popular with beach-goers.

Nordstrom quickly sold out of their first order, and Madison's story spread far and wide, appearing on multiple TV and news outlets. In 2013, more than $1 million in FishFlops were sold and the brand is now expanding to include t-shirts and books written by Maddie herself, as well as a new custom line for adult women at Macy's.

According to Maddie, her business has helped hone several important life skills, including public speaking "thanks to the experience of explaining her product at industry expos and making presentations to stone-faced department store buyers."

And the lesson for adults? Listen to your kids. They have million dollars ideas! 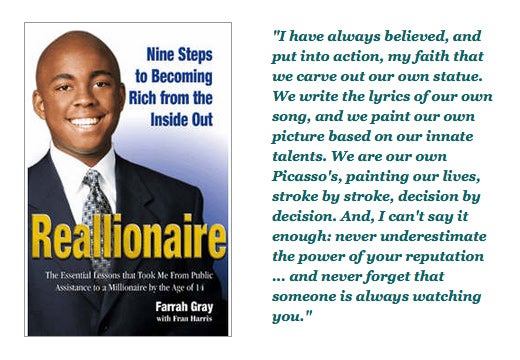 At 14 years old, Farrah Gray became a millionaire. He's also the youngest person to have a Wall Street office. He started at the age of six, selling body lotion, but once he reached his teens, Farrah took a decidedly different turn. He founded specialty food company Farr Out Foods at the age of 13, and later sold the company for 1.5 million dollars. Since then, he's been featured in hundreds of print, magazine, television and radio venues. He has also founded a social responsibility organization that focuses on inner city entrepreneurship education and helps students from at-risk backgrounds go to college.

Farrah has a wealth of advice to offer business owners, and typically receives speaking engagements paying as much as $10,000 each. He tells fellow entrepreneurs and anyone looking to follow in his footsteps that, "I have always believed, and put into action, my faith that we carve our own statue. We write the lyrics of our own song, and we paint our own picture based on our innate talents. We are our own Picassos, painting our lives, stroke by stroke, decision by decision. And I can't say it enough: never underestimate the power of your reputation… and never forget that someone is always watching you."

He continues, "Success isn't something that happens overnight: it's a process. You have to nurture it along with continuous care, and the best way to do this is tohave the right people working with you – not for you – but with you. I can dream alone and strive alone, but true success always requires the help and support of others."