Attention To Detail: Roberto Coin On His Luxury Jewelry Brand

The founder of the Roberto Coin line of jewelry explains how to build a winning luxury brand.

By Tamara Pupic
April 1, 2019
Opinions expressed by Entrepreneur contributors are their own.
You're reading Entrepreneur Middle East, an international franchise of Entrepreneur Media.

Roberto Coin's boutique in the Fashion Avenue extension of the Dubai Mall, which was opened in February in partnership with Damas Jewellery, comes across as a visual reference of two elements that are fundamental to the brand: nature and ethics. A vertical garden that covers part of the wall is the live backdrop that Roberto Coin chose to display Animalier, one of his most beloved collections, while the shelves are lined with his 18 karat gold jewelry pieces, all carrying a Roberto Coin signature ruby on the inside of each piece. Roberto Coin uses only synthetic rubies to guarantee no stone comes from a region in turmoil, which brings us to the founder's innate and unwavering commitment to ethics in his business.

"People who know me understand that we have always been an extremely ethical company- not just now, when it is fashionable to be ethical," Roberto Coin says at the launch of his new boutique, noting that he has been one of the founding board members of the World Diamond Council since its inception. "We've worked with many international organizations to make the diamond industry respectable. I am a big fighter against synthetic diamonds, if they cannot be identified by the consumer, as well as by a lot of retailers. I am not against the selling of them; they can sell them as long as you, as a consumer, and the person who sells them, can identify them. If he or she cannot identify them, and does not declare that they actually are synthetic diamonds, I don't like it. I believe in that kind of world." In Coin's case, all polished diamonds used in his collections are purchased from legitimate sources and from conflict-free areas, for which the brand subscribes to the Kimberly Process Certification Scheme (KPCS) and the System of Warranties. Coin has also been distinctively active within the philanthropic community, with his brand repeatedly winning accolades for its corporate social responsibility initiatives, about which he says, "I believe in charity, which taught me to steal money from the rich, and give it to the poor. And in this case as well, you need to be ethical. People give you money, because they believe that it will be used for what it was given. That is the world that I represent." 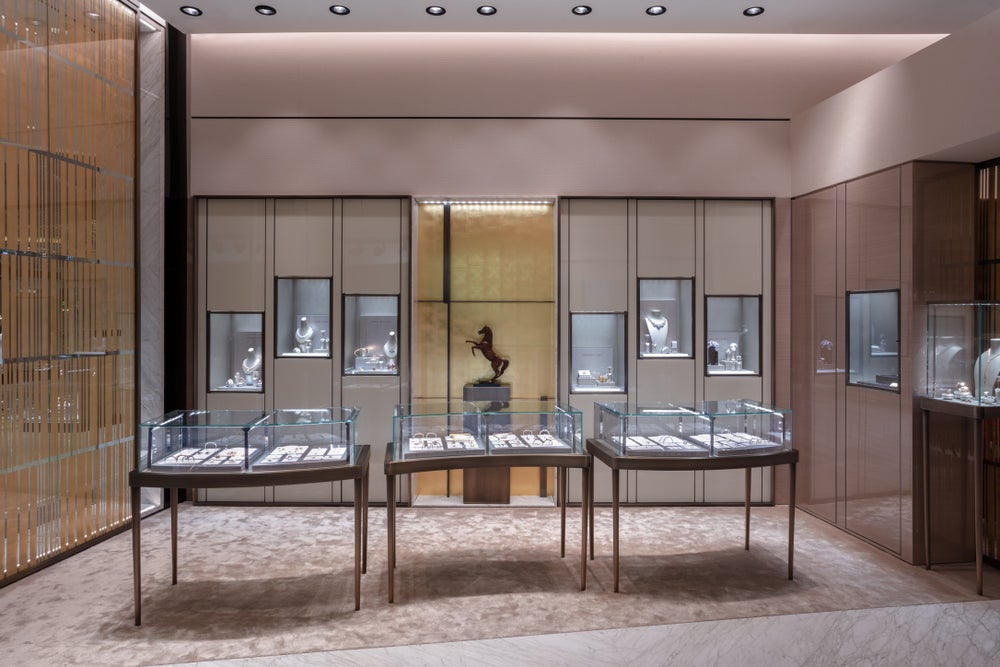 The Roberto Coin brand was born in 1996, and today lists notable personalities like Isabelle Adjani, Christy Turlington Burns, Hilary Clinton, Sofia Vergara, and Oprah Winfrey among its loyal clients. But to really understand how Coin got to where he is today, we have to go back to his first entrepreneurial success in Guernsey in the UK's Channel Islands. Having lost his parents at a young age, Coin finished boarding school in Switzerland, and, when he was 18, he moved to the UK to learn English. Only a year later, however, the entrepreneurial Coin bought a café, then a restaurant at 22, and lastly, two years after, took out a bank loan to buy a hotel that was frequently visited by the likes of the Duke of Richmond, HRH Prince Charles, Tony Bennett, and many others. "Becoming a successful hotelier is in our understanding of how to look after our clients, and how to service them well," he says. "We know if you are with your husband, we understand if you are with your lover, we probably understand if the two of you are just friends. So, we understand the service, meaning what kind of things you like. If you call us to come to your table, we know what is missing even before reaching the table, because we know how to observe people and things. Our observance is based on the desire to serve you better. Being a hotelier was a great school for starting any other business later on."

This attention to detail proved to be a great asset when Coin decided to enter the jewelry sector. At 32, he returned to Italy, and used the proceeds from the sale of his hotel to make a career shift, becoming a newcomer among more than 5,000 jewelry manufacturers in Italy at the time. "I did not know that I could create jewelry," he recalls. "But I loved it, and when you have that kind of an attentive mind, and when you are Italian, by which I mean that every Italian loves fashion, we are born with it, it is part of our world, you want to try. And I wanted to try, but I did not know whether I could do it." However, building the Robert Coin brand to what it is today took years of toil, starting from when he ventured into this sector in 1978. "I had to learn how the jewelry industry worked by visiting factories, meeting people, and learning, and that phase lasted for six years, much longer than anticipated," he says. "A lot of people start up a business by employing people to do for them what they want to achieve. However, I wanted to gain knowledge, because only with it could I then present my work to the consumer, and to the public. If I had had zero knowledge, then I would have become a speculator, just a financier, and I do not represent money. Money has never been the most important thing in my life. So, I wanted to establish credibility for what I was doing. But it is important to say that I entered this sector as a businessman who fell in love with creativity, and not as a creator trying to become a businessman. That is a huge difference. In that way, you become more credible faster, because you are a businessman who is selling jewelry."

Over the years, Coin perfected his craft by manufacturing jewelry for other local and international brands. "They were fascinated with my design and quality, because when you are not from the industry, and then you start working in it, you appear as a breath of fresh air, something new in the market," he says. "Also, I liked making difficult things, although you can't make much money out of them. You make money on easy things, but at that time, I did not mind difficulty. So, I became another very important voice in the industry." However, almost two decades later, Coin says, he reached the point of deciding whether to sell the business, and focus on some new business opportunity, or to launch a new jewelry brand under his name. "I spoke to my clients who said that I was one of the very few who could become a brand," he says. "They gave me the courage that I could do it. They knew me well enough."

Since 1996, the Roberto Coin brand has released five new collections annually, which translates into approximately 600 new models every year. Coin explains that the number of pieces per collection varies, and depends on the type of jewelry- a Prêt-à-Porter collection usually contains 30 pieces but, if it is a limitededition collection, one or two chosen models are produced in only 10 units worldwide. "I also make inexpensive jewelry, because I need that kind of clientele as well," Coin adds. "Good taste does not belong only to the rich, and it does not mean that if something is expensive, it is also beautiful. Inexpensive jewelry can be more elegant than the expensive one. So, I don't make jewelry only for kings and queens. I make jewelry for everyone." 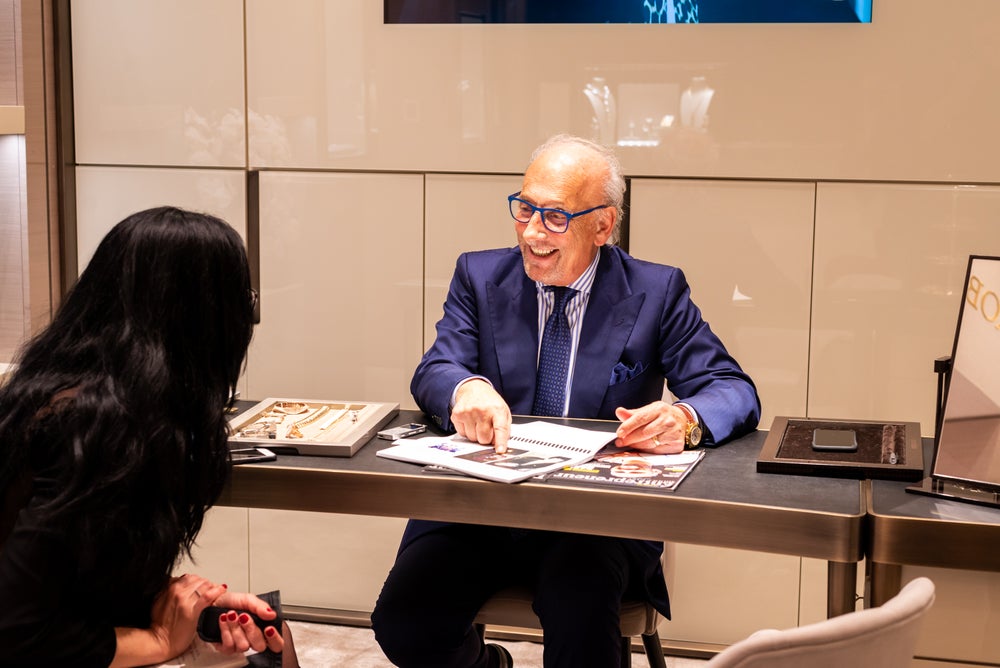 As for the reason behind manufacturing 600 new models every year, it's in the brand's main promise: to dress every woman differently. "Brands tend to make everyone the same and equal, but for me, that was boring," Coin declares. "I have always said that women are not like that anyway. They are very different. And they are intelligent, because the first thing they ask when they go shopping is, "What is new?'" Coin's creations are available in 60 countries and at 1,000 points of sale which are based on different business models, ranging from franchises, like in Baku, Kuala Lumpur, Panama, Marbella, or Kuwait, or partnerships like the one with Damas Jewellery in Dubai, as well as direct mono-brand boutiques, such as those in Rome, Venice, Prague, and Miami, and so on. "We sell online in Europe and the US, but I would not define it as a successful business, because buying jewelry online is still something difficult," Coin adds. "Anyway, it is important to say that e-commerce improves the product knowledge for the customer, implying an increase the physical sales in the retailer distribution."

In recent years, the jewelry sector has faced a shift in customer preferences. Millennials value experience very highly, and do not base their happiness on possessions or career status, according to an Eventbrite's nationwide research conducted by the Harris Group in 2017. Coin confirms that the jewelry sector sentiments indeed have changed. "Younger generations are not that interested in jewelry, or they want to buy it more often and for a cheaper price," he says. "Younger generations don't even think about having a piece of jewelry forever as we used to. Probably, they will, later on, but not for now. There is overproduction of everything, not only jewelry, there is too much choice in everything. So, we are going through a continuous evolution. But, for as long as we are concerned, we have only one problem– we want to be better than our competitors." This dedication to quality definitely seems to be serving the brand well- and, as such, Coin's entrepreneurial peers can well follow his lead.