Meet the man on a mission to bolster the future of Kuwait's national airline.

"Do you remember, Aby, who was the second person to walk on the moon?" When Kuwait Airways CEO Maen Razouqi posed this question to me when I interviewed him in August this year, I must admit that in that moment, I found myself stumped for an answer. A Google search later reminded me that the person who followed in American astronaut Neil Armstrong's historic first steps on the moon was his colleague on the space mission, Buzz Aldrin, but the fact that I couldn't recall his name off the top of my head allowed Razouqi to make his point.

You see, at the time, Razouqi was telling me about Beyond Excellence (BE), the transformation program that he had initiated at Kuwait Airways earlier this year, and I had quizzed him on the reasoning behind the name he chose for the digitally focused initiative. "I come from a personal belief that you have to be number one, and being number two, to me, means you're the first in the biggest line of losers," he says. "So, coming second is not something anybody remembers. Do you remember, Aby, who was the second person to step on the moon?" And as I shook my head in response, Razouqi reiterated his reasons for wanting Kuwait Airways -the state-owned national carrier of Kuwait- to aspire to be at the top of its industry. "Within our capabilities and abilities, excellence is not satisfactory," he declares. "I want us to achieve beyond excellence, because beyond excellence, there is no limit to how far you can go."

The BE program is one of the most significant initiatives that Razouqi has kickstarted at Kuwait Airways since his announcement as its CEO in October 2021. The initiative, which was launched as part of the 68th anniversary of the enterprise, has been built on the directions on the strategy and goals set by the shareholders and board of directors of Kuwait Airways. Currently, the airline has 34 aircrafts under its purview that operate 57 direct routes, plus 82 in partnership with other airlines, with a workforce of around 6,000 employees. In 2021, Kuwait Airways was declared to be "an official five-star major airline" by the Airline Passenger Experience Association (APEX), whose rating program is the first of its kind in the global aviation industry that's based solely on certified passenger feedback.

From an operations perspective, Razouqi points out that the aviation sector is still trying to return to the high it saw in 2019, its best-performing year before the world was hit by the COVID-19 crisis, and that's the case for Kuwait Airways as well. "The Middle East specifically will most likely not get to that stage before 2024," he says. "It's not a recognition of the lack of capabilities, but, obviously, the readiness of the infrastructure and resources that are required to go back to that stage." As an example, Razouqi highlights here the 110% year-over-year (YoY) rise seen in the price of jet fuel lately, which can hamper the recovery being pursued by the aviation industry- however, he notes that there are factors working in its favor as well.

"The good news is that the expected passenger growth will continue to be positive, at a compound annual growth rate (CAGR) of around 4% YoY," Razouqi explains. "The expectation is that the number of total travelers around the world should reach double of what it was in 2019, which is around eight billion globally. So, the industry will grow. It's the right industry to invest in, as the number of passengers will continue to grow globally." And it's this projected scenario that Razouqi believes Kuwait Airways can capitalize on as it moves into the future. You see, the growth in the number of global passengers is expected to be driven by people from the Asia-Pacific, especially from China and India, and Kuwait Airways, by virtue of its location in this region, stands to gain a lot if it can become the carrier of choice for the populations of these nations.

Related: Get In The Zone: DUQE Free Zone Aims To Be The New Home For Disruptors In Dubai 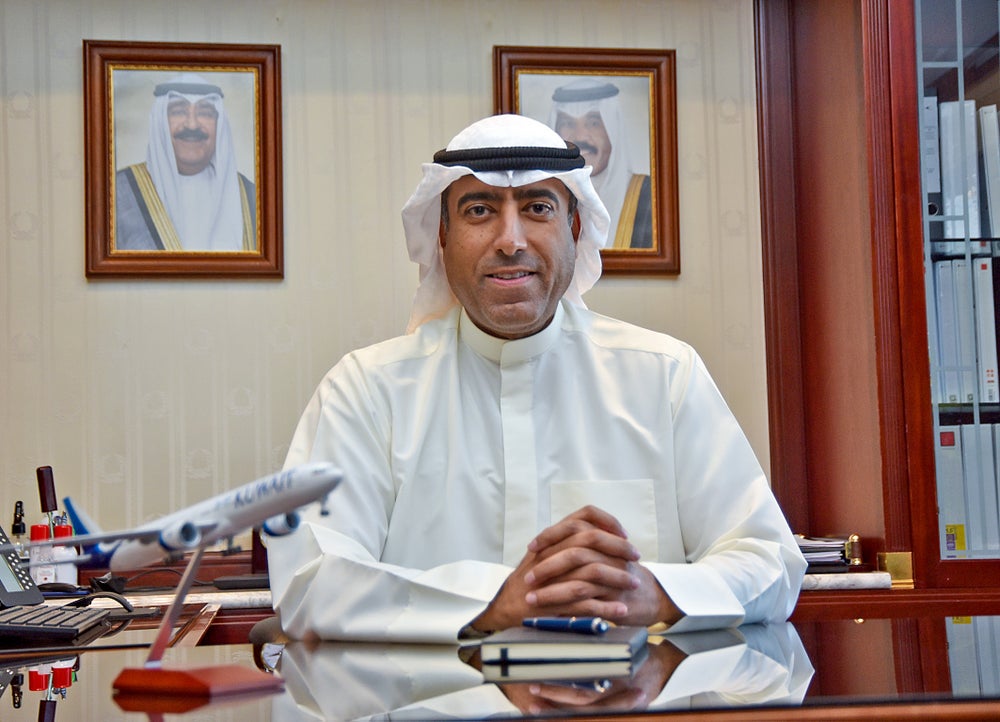 At the same time, the government of Kuwait has been trying to privatize the carrier for a long while now, and while those attempts haven't panned out in the past, Razouqi is determined to make it happen in his time as the CEO of the enterprise. "I have come into this role to achieve three main objectives in three years," Razouqi says. "The first objective is basically around transformation and restructuring the organization, both internally and externally. The second, and most important, is to potentially accelerate its profitability in the aviation industry. And last but not the least, considering the privatization law that was passed prior to the onset of the COVID-19 crisis, the third is to decide how to implement it, in the right time, with the right value, for our shareholders."

A major restructuring process is thus underway at Kuwait Airways, with its target being both the workforce (the aim is to reduce the overall management structure cost by 20%, Razouqi reveals), as well as its assets, with the Kuwait Airways fleet set to average 50 planes by 2025 that will cover 60 point-topoint destinations, and 150 overall through partnerships. Meanwhile, the enterprise's transformation is also ongoing- Razouqi's stewardship of the BE program has seen the airline engage more strongly with both its clientele and its employees to deliver on its overarching goals. Growth, performance, customer experience, and sustainability form the building blocks of the BE program, and Razouqi and his team's efforts in these domains do seem to be bearing fruit. For instance, Razouqi points out that the second quarter of 2022 has seen the airline's revenue growth increase by 9% compared to its performance in the first, and there's also been a profit improvement of 42% with respect to the first half of the year.

Passenger numbers have been steadily increasing (a 17% rise from the year's first quarter), and a host of new destinations -from Salalah and Sharm El Sheikh, to Malaga and Vienna and more- have been added to the Kuwait Airways portfolio as well. Razouqi is also determined to give his customers the best possible experience when they choose Kuwait Airways for their journeys- and this goes all the way from them simply thinking about booking a flight, to them picking up their luggage at their final destinations. That would explain, for instance, Kuwait Airways' new home check-in offering that it provides to its premium class customers, or its creation of a new "platinum" tier in its loyalty program. Meanwhile, the airline's use of the Airbus A320neo family of aircraft -which are known to achieve fuel savings of up to 20%- has been contributing to its environmental, social, and governance (ESG) goals as well. 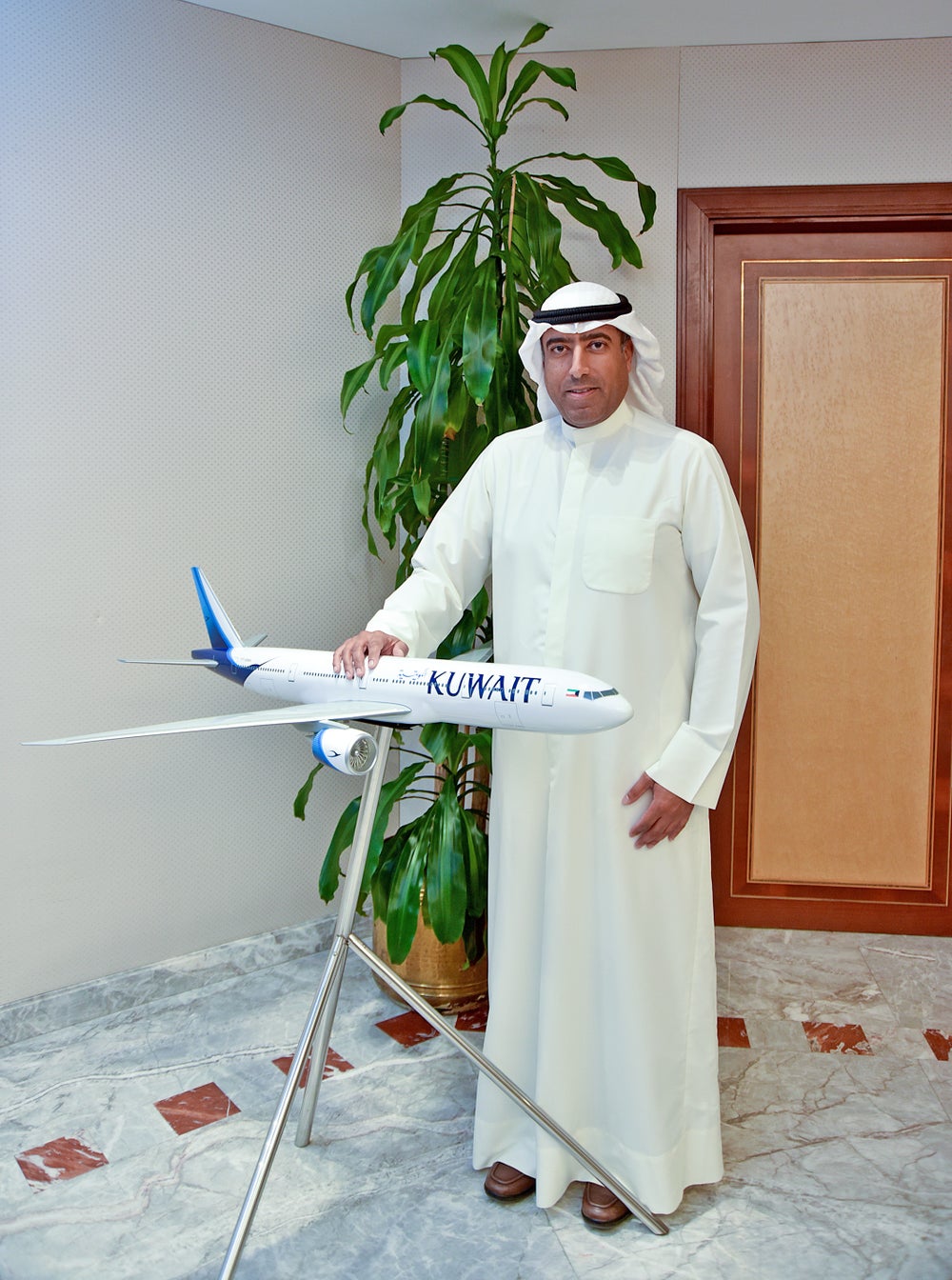 At the end of the day, all of these efforts are meant to serve a singular goal that Razouqi has outlined for Kuwait Airways, and it's one that encompasses all of the enterprise's different components, from aviation to catering, and engineering to training, and more.

"Our target is to be the most efficient airline," he declares. "And to be the most efficient airline, you don't need to have 200 planes- all you need are two planes to benchmark your efficiency and performance. And we want to be the most efficient airline in the world." Now, this can perhaps be considered to be a lofty goal for Kuwait Airways, but then again, consider the drive and dedication being exhibited by the person driving the enterprise to achieve it- I can personally state that Razouqi's bullish and buoyant demeanor is hard to dismiss. Plus, he has come to lead Kuwait Airways with a wealth of experience from an illustrious career that has seen him work in various operational and managerial roles in the Middle East, Africa, Europe, and North America- in fact, his last role was as the President and General Manager for the northern Middle East region at Schlumberger, the world's largest offshore drilling company. Add to that the fact that Razouqi, as a Kuwaiti national, considers his current role as a part of his national duty, and that adds a whole another level of drive to what he has set out to accomplish.

"It was an exciting challenge," Razouqi says, as he explains his reasons for taking up his current job. "It's a very challenging position to be in. And that's the drive. If we were the number one airline in the world, I may not be in this position, or even attracted to be in this role. But the fact that I want us to go down that route is what drove me to be here today." Razouqi's ambitions are clearly sky-high, and that bodes well for Kuwait Airways' future as well- here's hoping it takes off.

Related: Follow The Leader: Seafood Souq Co-Founder Fahim Al Qasimi Is Building "A UAE-Born Business That Will Change The World"

Cutting Costs And Managing Expenses As A Business: The How-To