The healthtech startup aims to achieve its mission of further improving the quality of diagnostic standards, and improve its machine learning capabilities for greater accuracy for early detection of breast cancer.

By Pamella de Leon
January 24, 2021
Opinions expressed by Entrepreneur contributors are their own.
You're reading Entrepreneur Middle East, an international franchise of Entrepreneur Media.

In 2020, Nature.com published how researchers from Imperial College London and Google Health made use of artificial intelligence (AI) to spot abnormalities on x-ray images from nearly 29,000 women, with results showing how the algorithm outperformed six radiologists in reading mammograms. With this being an indication of the theoretical potential for AI to be able to detect cancer earlier with greater accuracy, it also presents an opportunity that UAE-based healthtech startup Prognica Labs is hoping to tap into in the GCC region.

Launched in 2019 by Khalid Shaikh, Prognica Labs is on a mission to improve clinical outcomes and accelerate the discovery of advancements in the fight against cancer. The startup is building a smart screening solution that analyzes medical images and generates insights to help predict and detect early cancer signs using AI and machine learning. Given the complexities involved in different types of cancer, Prognica Labs has chosen to start with a focus on breast cancer. According to the World Health Organization (WHO), 21 million women are impacted each year worldwide by breast cancer.

And if we take a look at statistics closer to home, the startup found that in the UAE, more than 75% of breast cancer patients only seek medical advice after experiencing a sign or symptom of the disease and many seek such advice late. The lack of awareness about symptoms of breast cancer and routine screening has also an important effect on symptom appraisal and decision- making regarding options for treatment. The team at Prognica Labs also found that many breast cancer patients aged 35-70 years old have experienced delayed treatment following the symptomatic recognition of breast cancer, and the time interval between the initial experience of symptoms related to the disease and seeking medical help ran from three months to three years.

Prognica Labs is thus aiming to examine factors that impact delayed presentation for treatment with breast cancer in UAE, while also contributing to the advancements of the standards and quality of breast cancer screening for early detection. It's an ambitious agenda, but one that Shaikh says he's is ready to take. As a self-proclaimed "technocrat," Shaikh had also launched Affaan Technologies in 2008, which offers AI and machine learning consulting services, and works with augmented reality, virtual reality and big data across different industries. So, what intrigued the founder and CEO to the healthtech scene? Shaikh explains that he took a special interest in it following an aunt's experience with breast cancer. "I can still remember how [much of a] difficult time it was for her and the entire family, even psychologically. And I started thinking back then that there should be some easy, fast and accurate way to detect and diagnose [cancer], and women should have quick and greater access to their reports."

As a sole founder with no medical background, Shaikh took the time to research and study about breast cancer, as well as the process of analyzing medical images from a radiologist's perspective. To understand and validate his knowledge, he consulted with a number of doctors, hospital owners, and government authorities. He has since benefited from the input of a number of advisors and mentors, which include names like Dr. Jamal Alhajj, previously Senior Surgeon at the UAE Ministry of Health and Prevention, Brig. Dr. Ali Singel, who is the General Health Advisor at Dubai Police Health Center and consultant at Dermalase Clinic, B. S. Vadivelu, CEO of Logic360 Business Consultancy, Shailesh Janu, who works at the Data Science Department at LinkedIn, and Asad Haque, CEO at ICT Consultants.

Through research, Shaikh and his team identified three core issues with respect to the healthcare sector: the low doctor to-patient ratio worldwide, how doctors are overworked and overstretched (which may lead to the variability and subjectivity in the way that diseases are diagnosed and treated), and the cost of high quality medical equipment that makes it difficult for some entities to adopt the latest tech in the market. "We are trying to address these issues through data and intelligence," says Shaikh. "We are developing the next generation [of] smart screening technology for medical image analysis that healthcare providers and patients can confidently rely on." In particular, with mammography being one of the most widely used methods for breast cancer screening, Shaikh notes that its complexity and high volume of exams per radiologist can also result in false diagnoses. "During mammography screening, the presence of breast micro calcifications is a primary risk. Breast calcifications in the early stages of breast cancer appear like scattered spots in the mammographic image, which range from 0.1 to 1.0 mm in size," says Shaikh.

This makes it difficult for the accurate detection and diagnosis of a breast lesion, and one thus becomes highly dependable on the expertise of the radiologist, which can lead to a high number of false positives and additional examinations. On the other hand, Prognica's proprietary tech -PrognicaMMG- automatically detects the masses in a mammogram, and then helps in segmentation and classification of the tumor. To validate its technology, the startup has trained with a large-scale, high-quality Digital Imaging and Communications in Medicine (DICOM) mammogram training dataset- this involved more than 60,000 cases in total, of which more than 22,000 were cancer cases. It was also clinically validated to significantly improve the interpretive capabilities of radiologists of up to 12%. 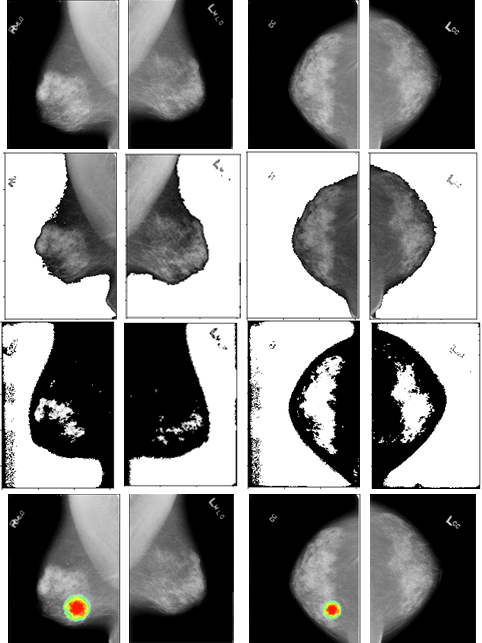 With Prognica's proprietary "Triple-D Neural Network" technology, PrognicaMMG automatically detects the masses in mammogram and helps in segmentation and classification of the tumor. The process aids in robust diagnosis by using double thresholding to obtain perfect location of tumor. The neural network strategy uses a smaller number of dense layers with proper feature selection which leads to a higher accuracy in diagnosis of breast cancer, generating location information of detected lesions in the form of heatmaps and abnormality scores reflecting the probability of malignancy.

The solution is currently in preparation for CE marking (a designation for products sold in the European Economic Area that have been assessed to meet high safety, health, and environmental protection requirements) and patent filling, and Shaikh notes that he and his team also submitted a research paper on their tech and findings to various journals as well. While it is currently working on a solution centered on mammograms, the startup is aiming to work next on offerings catered toward breast ultrasounds and breast magnetic resonance imaging (MRI). In the UAE, the startup has partnered not only with hospitals, but also with various universities (most recently, Ajman University) for collaborative research in the field of medical and engineering, especially in medical image analysis and genetics for early detection of thyroid and prostate cancer.

"The partnership is based upon the premise the increased linkages between industry and higher education can improve quality and foster innovation within the pedagogy and practice of engineering, in turn enhancing employability of graduates and encouraging technology transfer into the industry," says Shaikh. With partnerships such as these, Prognica Labs is able to conduct seminars, cohorts and idea competitions for students, as well as help young researchers in identifying the characteristics of the economic environment. The startup also has an "industry support strategy," which entails interviewing prominent industry leaders to share their knowledge and experiences to promote the UAE's startup and innovation ecosystem. 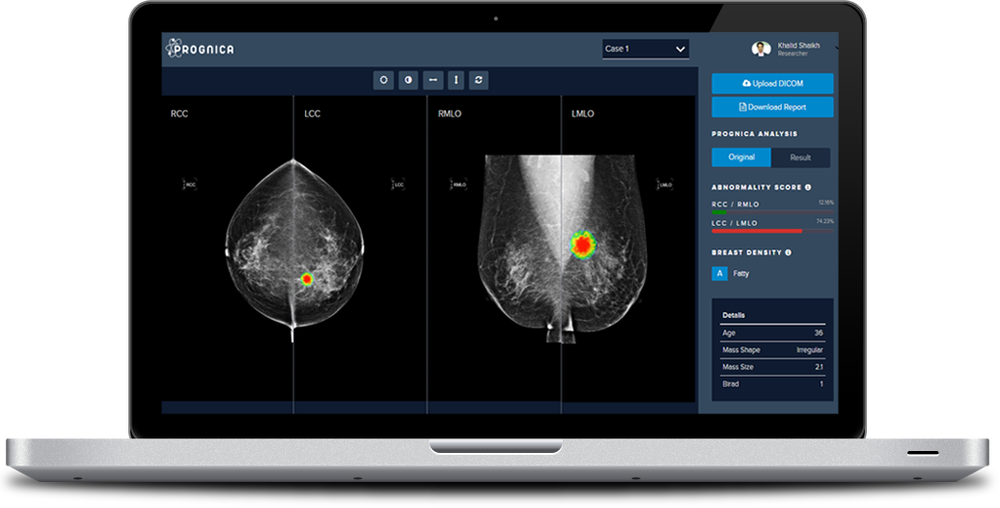 As for its business model, Prognica Labs is a cloud-based SaaS B2B online platform, with the startup catering to healthcare organizations (such as hospitals and diagnostic centers) and research institutions. They offer a monthly and annual subscription, as well as a pay-per-report model. The focus is on the UAE market at the moment, but the startup plans to gradually expand to the rest of GCC and East Africa, followed by the US, UK, and Europe. As a completely bootstrapped company, Prognica Labs is self-funded so far, and the team is now looking to raise a seed investment round. With the focus on increasing the startup's proprietary tech to be as accurate and fast as it can be, Shaikh notes that the support they've been receiving from healthcare professionals and government officials has been quite encouraging.

Going ahead, the healthtech startup aims to achieve its mission of further improving the quality of diagnostic standards, and improve its machine learning capabilities for greater accuracy for early detection of breast cancer. 2021 is an ambitious year for the company- Shaikh says he and his team at Prognica Labs plan to implement 65,000 screenings and 250,000 (mammogram and ultrasound), as well as expanding to other GCC countries. Looks like it's full speed ahead for this startup!

What do you say to the belief of some people that AI will lead to job losses? How do you disband the common dangers of AI in healthcare?

"One of the more accurate metaphors for how AI will impact jobs is how autopilot has impacted pilots. The pilot may turn on autopilot while in the cockpit, allowing it to handle "tedious or repetitive tasks,' but what if the system has a malfunction or there's a horrible storm on the horizon? The pilot is right there, able to take over as needed. In healthcare, rather, their roles will be redefined and may ultimately merge with the other key information specialists in healthcare– thus creating well-rounded information specialists who may have a deeper and broader look into diagnoses and treatment pathways. While the future will likely hold a different role for the physicians and radiologists, the importance and clinical need for them will only increase. AI should not be seen as a replacement of the physician, but as a complement to the physician. AI provides remarkable opportunities for them to improve the way they deliver care to the patients and to make what they do more valuable. In healthcare and medicine, AI systems should be providing "decision support' and leave all ultimate "decision-making' to a qualified human. This is because it is impossible for an AI system to ever be 100% accurate in solving a medical diagnostic question. After all, medicine can never be fully quantified or solved."