With rise in Biryani orders, six start-ups venture into biryani business as being maharajas and share insights from preparation to packaging the dish in their unique ways

Adit Madan loves biryani, and he especially relished the dish during his trips to Lucknow, Hyderabad and Kolkata. He longed for a better biryani back home in Delhi. He travelled for two years in South India, experimented, searched and mastered the art of biryani. "After attempting to cook biryani the right way for a thousand times, I found a right balance and ingredients for my gourmet biryani, much to the delight of my family," he shares. Soon, Madan's The Biryani Project took wings. Kaushik Roy, a former Group COO at Zooropa Foods, holds extensive knowledge of F&B industry. His partner Vishal Jindal, a founder at Carpediem Capital Partners, based in Gurugram, keeps food and research close to his heart. Realizing it is time for them to start their own legacy in biryani and kebabs, they started Biryani by Kilo. Jindal says, "By next year we will be opening our outlets in the UAE, the UK and Singapore."

Coming from a Bohri- Muslim community, Farhat Saxena, Founder, Go Biryan, has a similarly exciting story. After completing MBA and spending 26 years as a pharma & FMCG strategist, Saxena finally took the plunge to start an aunt-nephew venture, Go Biryan (formerly known as Le Bereyan). Her enterprising nephew, Shehzaad Lokhandwala, Co-founder, comes from a premium carreseller background who also started a desi-chinese QSR named – Sillichilli. They started off with their first store in Andheri after pooling their savings. Farhat adds, "Biryani is an everyday dish for us but the excitement was to give a great tasting, consistent product with variety to impart a sense of celebration to the everyday consumer at homes, work and parties." 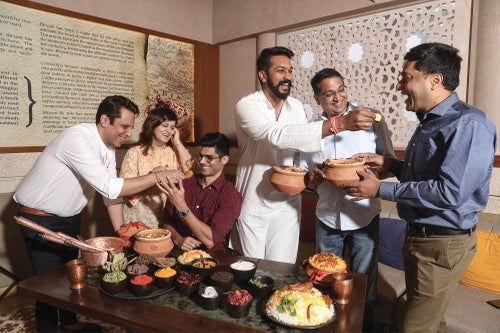 ON A MISSION
Being an entrepreneur is a brave decision when you are venturing into a new sector without any prior know-how. Luckily for Sreevathsava Rao, Founder, Biryani Company, the experiment turned out to be a success. From sharing biryani with friends during college days at Sri Venketashwara College, Delhi University, he has come a long way. "I am a die-hard chicken lover coming from the land of Nizams in Hyderabad, and I believe biryani and I share an old connection. The idea came to me in the final year of college when I explored the food demand and opportunity amongst youngsters and decided to give my shot at Biryani Company," says Rao. From a small kitchen in Satyaniketan in 2014, he now has six outlets in Delhi and the National Capital Region.

Coming from the hospitality industry with work experience in Kebab Factory, Park Plaza and Radisson, Vipin Kumar and Dharmendra Singh decided to team up and started Biryani Art. Kumar says, "After pizza, biryani is the most ordered dish in India and we both saw great scope of intervening in this industry." With finance and corporate background at Kotak Bank, Edelweiss, Anurag Mehrotra from Charcoal Biryani switched from corporate world to food industry with ease. His motivation was the absence of good Indian food during his international trips. Biryani being a whole meal, he wanted it to be an on-the-go Indian food. He made good use of technology in food business to create data, track and control the supply chain efficiently.

WHY BIRYANI?
The online food ordering market in India is likely to grow at over 16 per cent annually to touch $17.02 billion by 2023, according to a study by business consultancy firm Market Research Future. Also, by Statistic report Swiggy noticed a 681 per cent increase in its biryani orders in 2018. No wonder these start-up founders chose biryani from the varied cuisine available in India. Rao says, "We are inspired from Nizam, who used to carry rice, meat and spices in handis during his long travels. Biryani brings this sense of adventure and wholesomeness in it." Madan adds, "While going back to roots, I wanted to revive the biryani culture, the variations and ethnicity it brings along."

BBK's Roy is emphatic about the duo's choice. "We wanted to preserve the Khansama style of cooking in which each biryani is freshly cooked with rich ingredients." Vinay Mittal, former Chief Financial Strategist, HT Media, who has invested Rs 2 crore in BBK's business so far, adds, "I come from investment banking and corporate finance background; I put my money only where the mouth is. I feel the consumption capacity of middle-class men is on the rise. Biryani is liked universally and, especially in BBK, you can see that capital spent is equal to revenue achieved." Mehrotra from Charcoal Eats wanted to bring Indian food at par with western fast food in the international market. He has raised Rs 12 crore to expand business to Middle East and Europe. 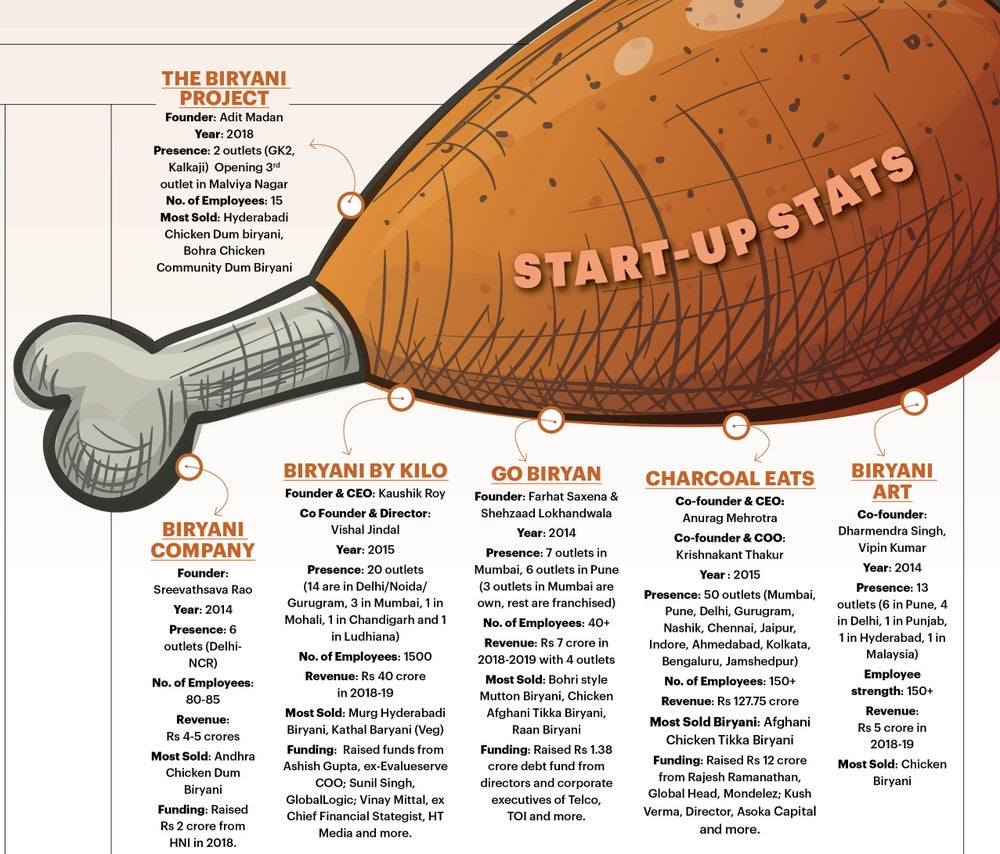 FOREMAN'S DISH
Implementing and advancing the smart kitchen model, these start-ups have built their scale. Go Biryan has a central kitchen concept at outer Mumbai from where near-ready products are transported in refrigerated vans to all its outlets each day. Its food is fresh & not frozen at any stage as its inventory management system ensures appropriate and adequate stock of each variety on each day at every location. Biryani by Kilo sources its meat from Jaipur and has partnered with Dawaat for its long-grained rice. Biryani Art goes traditional and trains and tests its staff in Hyderabad office before sending them to outlets. "As meat and rice as the staple in Malaysia, we have customized our menu, focusing more on tandoori and North Indian cuisine," adds Singh. BBK prepares and serves each biryani individually. The layers of rice, meat and spices are cooked in the handi and the same pot is served to the customer. Go Biryan serves in biodegradable and microwable boxes to its largely office clientele.

GALA & GLOOM DAYS
High and low moments are natural in any business, so is the case with these home-grown chefs too. Madan says, "Since we are a made-to-order model, our delivery time (60 minutes) is higher than the Biryani QSRs, who are delivering pre-cooked and re-heated biryani in 30-35 minutes. However, we have seen a healthy increase in customers who want to savour fresh biryani." Singh adds, "Surprisingly, the online business is a challenge for me as third-party aggregators take huge commissions and we are bound by them in accessing customer's data." The gala days are centred around World Cup, Eid, Diwali and some rainy days.

HELLO VEGANS!
So is there anything for vegetarians on the menu? Sensing an opportunity, many of these start-ups serve vegetarian dishes too. For instance, BBK has Peshawari Chole Biryani and Go Biryan serves as many as six distinct vegetarian biryanis and in fact also has recently launched Veg-Only Vile Parle outlet while Biryani Art's Mushroom Biryani are leading the way too. From Mughals to modern yuppies, the biryani brotherhood has crossed continents and conquered many hearts. No wonder it has become the recipe for start-up success!