What is the Future of Global Subscription in The E-commerce Industry?

By Ashwin Ramasamy
May 28, 2018
Opinions expressed by Entrepreneur contributors are their own.
You're reading Entrepreneur India, an international franchise of Entrepreneur Media.

Subscription boxes have been around for a while now. In the years between 2007 and 2008, early B2C attempts like "private sales', subscription for books etc. were tried. None of them registered success and we don't quite know the stories.

Between 2011 and 2012 Dollar Shave Club, Birchbox and BlueApron. Launched and opened the floodgates for the subscription boxes boom to flourish. There's a Dollar Shave Club or a Birchbox for every category right from menstrual supplies to marijuana. The basic subscription model is pretty rewarding (for the shoppers that is!). Pick your favourite category, get a subscription, and be surprised every month with a handful of products from that category. It's this category that that's being tracked in the rest of the report.

Another category which is "monthly replenishment' which is familiarized by the likes of Amazon for replenishing grocery isn't considered in this report.

There's been a buzz in the "subscription box' industry ever since Unilever acquired Dollar Shave Club for $1 billion. That's five times its annual revenue (~$200M projections for 2016, at the time of acquisition in mid-2016).

Why was Dollar Shave Club a success? It skipped e-commerce-like valuation (typically 1-2x) to SaaS-like valuation (5x) and it was the first consumer brand exit with a subscription model around it.

But, it's not all roses in the subscription box land. Birchbox, one of the earliest subscription boxes has had two rounds of layoffs in 2016, a whimper of fundraising of $15M in 2017 and is in talks with retailers including Walmart for a sale. So, what really is happening in the "subscription box' world? Is it an era that never was?

Data Science has some answers

We fed thousands of e-commerce websites through NLP and an ensemble of ML algorithms to produce a "subscription box score". The companies with high scores based on the model have been taken into account for this article.

The Growth of Subscription Box commerce 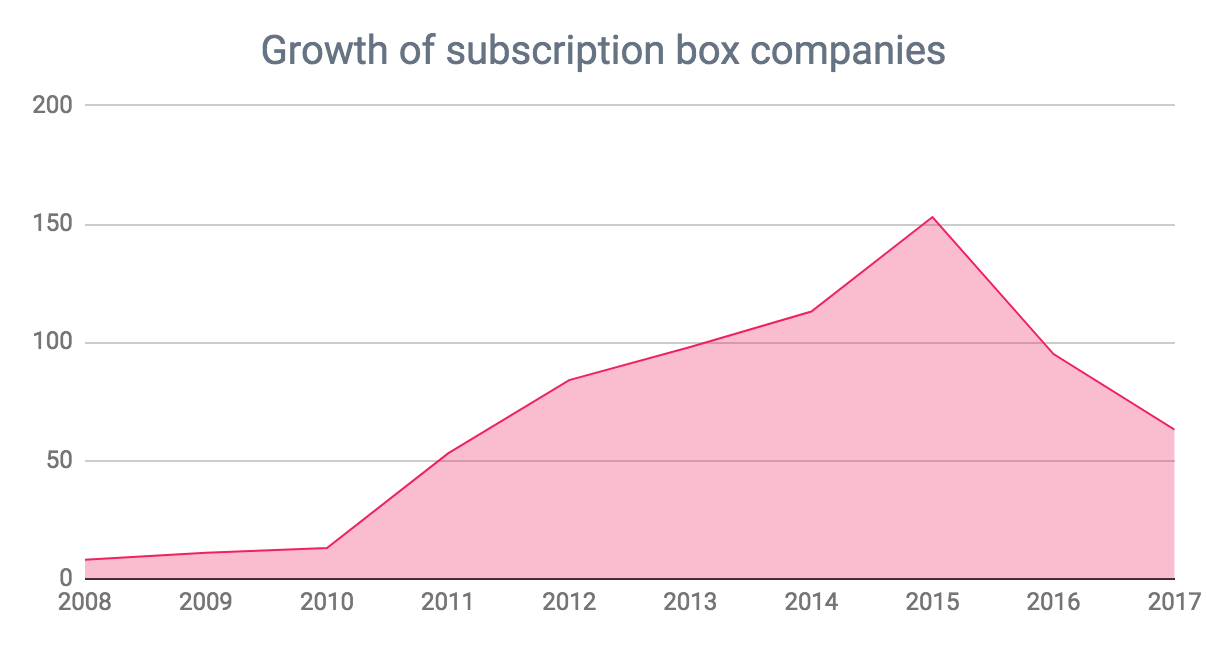 Unlike e-commerce, where US' might is questioned by China, in the case of subscription box segment, it's the US that's primarily driving the action.

But, when you compare the number of subscription box companies to regular e-commerce companies, the former is a mere raindrop in the Pacific Ocean. In this report where the global e-commerce market size has been estimated to be over 1M (excluding China), it could be concluded that subscription commerce is a rounding error. 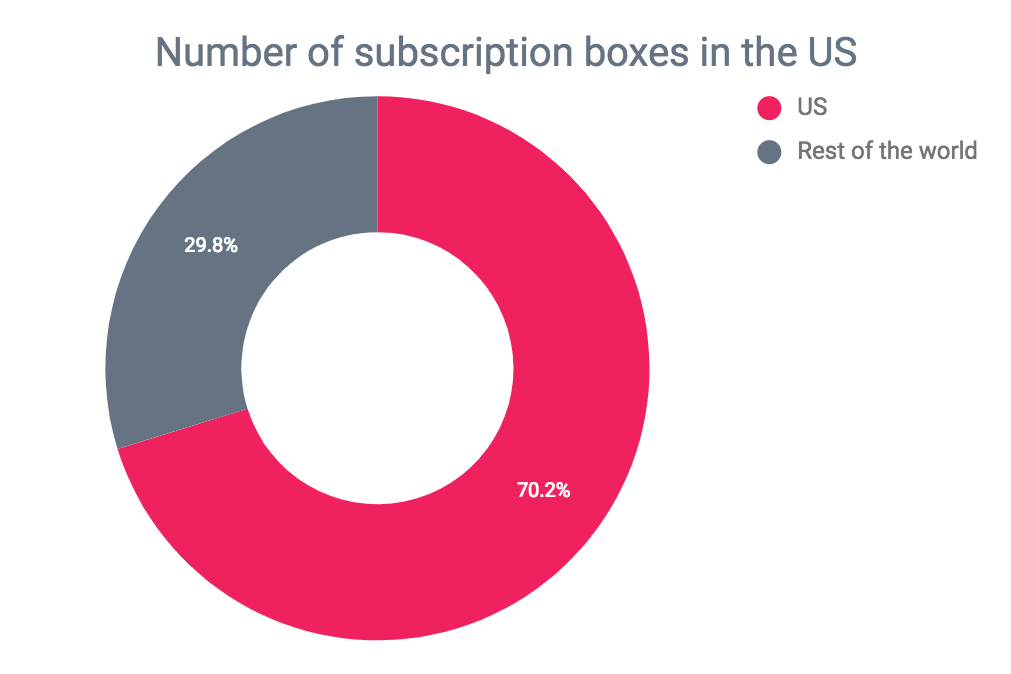 The market is dominated by niche-products like coffee, tea, meal-kits, etc. and it accounts for close to 20% of the market. Selling anything from weekend experiences for couples to stationery to cannabis, Hobby as a section of the market contributes to over 15% of the market, about 13% of the companies sell beauty and grooming products to men, women and their pets. 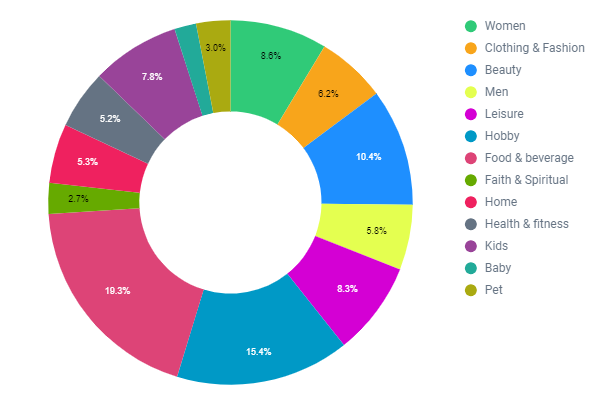 To summarize, subscription commerce companies focus on products and services that are supposed to satiate the craving for experiences & a sense of well-being. The customers are going to be fickle with discretionary purchases & the spending is more closely tied to economic cycles than categories like general merchandise. There is some clue here as to why you won't see a lot of unicorns in the subscription space. If the boom cycle we witness in the US post the 2007-08 recession comes to an end, we'd see the impact on the subscription box category.

How are subscription commerce companies funded? 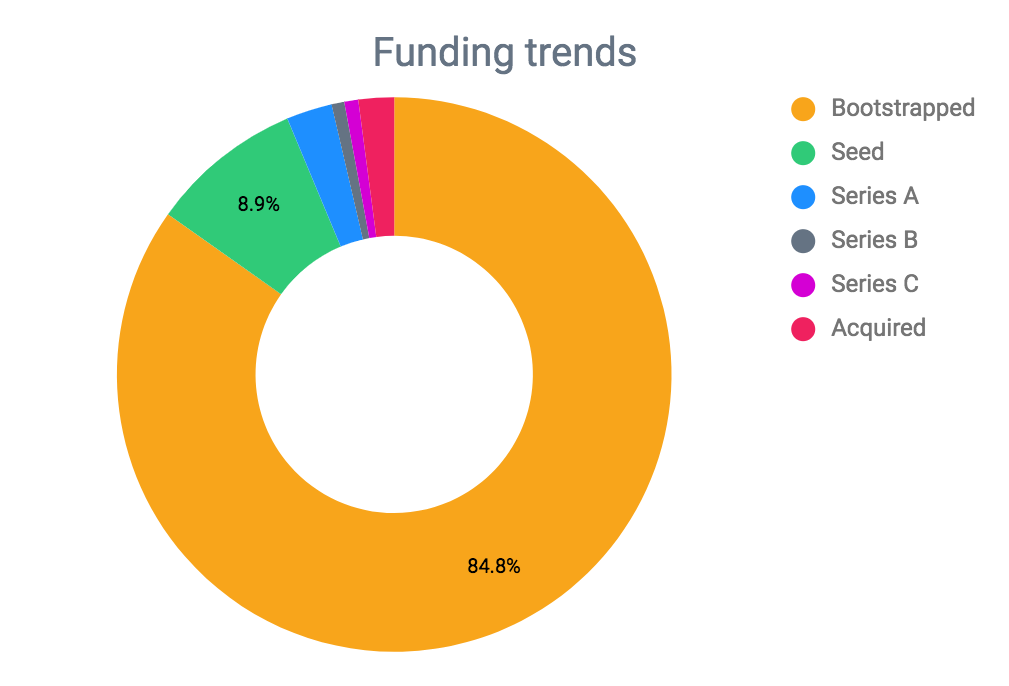 Public news sources were relied upon to track funding announcements. While effort has been made to track funding in the non-US regions, these numbers may need further investigation to confirm global coverage.

More than 80% of subscription box companies are bootstrapped. What's more telling is just 2% of the companies started in the last 10 years in this space have been acquired or IPOed and just 4% of the companies raised growth equity in the last 10 years. Blue Apron, the lone IPO in this space in 2017 in the US, is also considered to have had among the worst performing IPOs of the year, while HelloFresh, their competitor from Germany has had a better run at the exchanges. Plated was acquired by Albertsons.
From 2010-2017, the number of investments in this space and the amount invested has been a roller coaster. According to Quid's article on subscription box commerce, "The industry became quickly saturated between 2014-2015 with the largest tally of total investments and highest dollar amounts invested happening in those years." 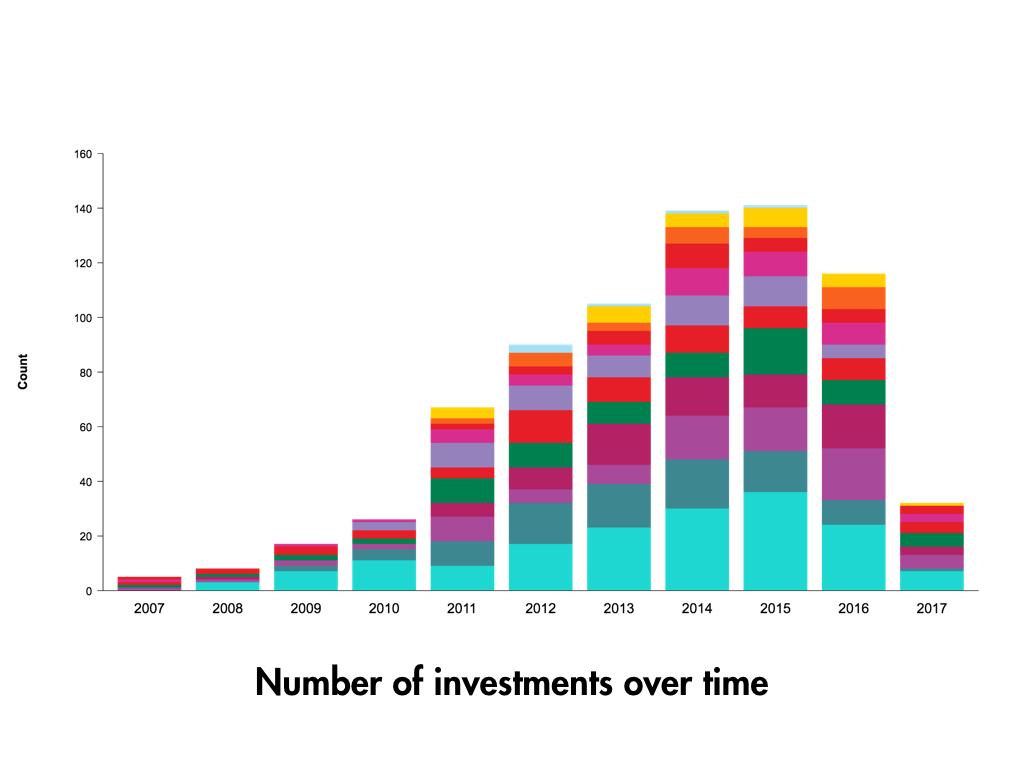 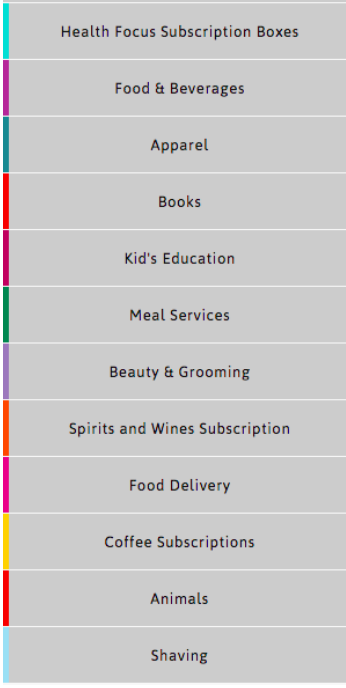 Although the number of investments from 2014-2016 hasn't drastically changed, the amount invested has dipped post-2015. Reason being, the investors are becoming more cautious but want a foot in the door, because successful exits and IPOs haven't happened beyond isolated cases. 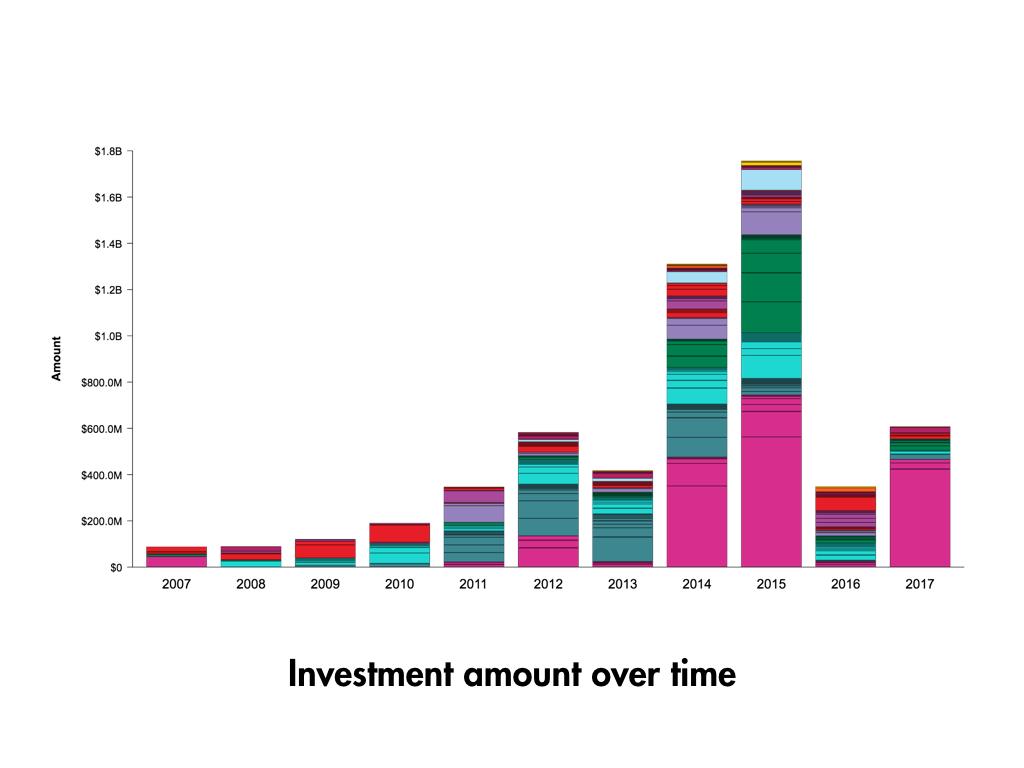 Each class of companies from 2010 onwards till 2017 were tracked. Every cohort has had over 35% of the companies shut down since the start. Class of 2016 is an exception, with over 47%. 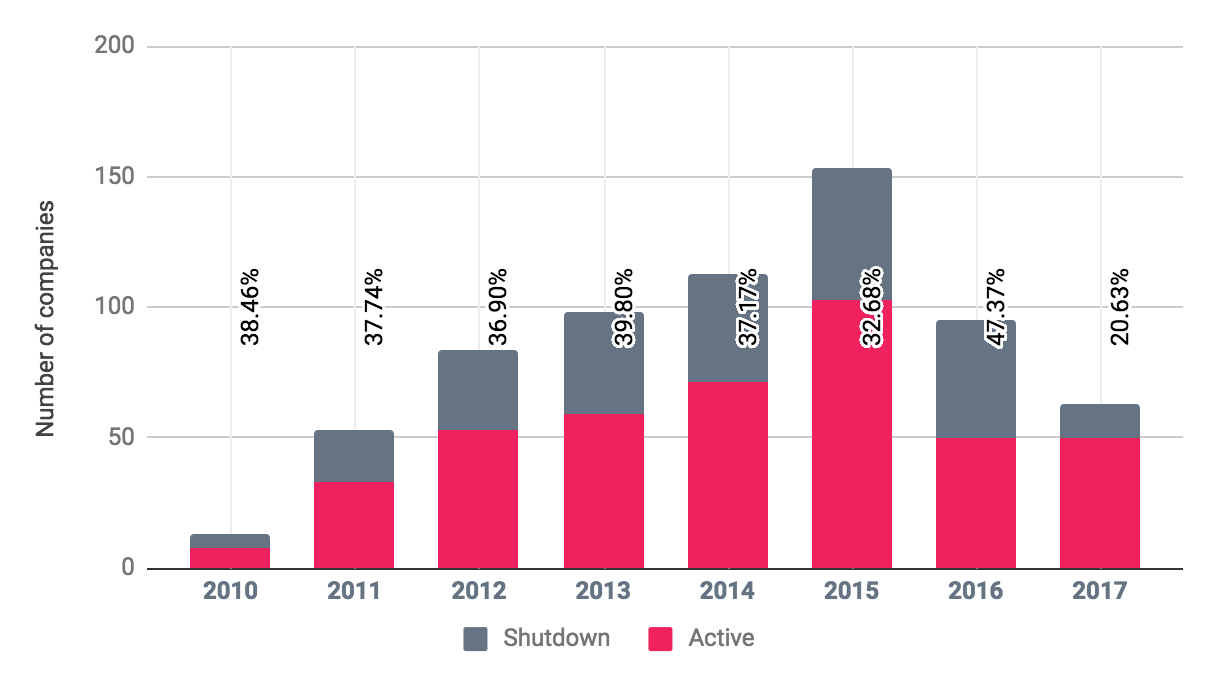 While data shows that, only over 20% of the class of 2017 have shut down, it is hard to read too much into this number and consider it as a trend reversal. Data from end of January was taken into account. So the status of not all companies' of the class of 2017 would have been captured and the news about their status would not be in public domain yet. The shutdowns by domain redirects or traffic patterns were tracked. Such signals are lag indicators and would emerge in the coming quarters.

Subscription commerce is a small trend within e-commerce and will remain niche. Trends like Amazon Fresh and acquisition of Plated by Albertsons point to "subscription' becoming a feature within the broader e-commerce strategy. Public market and secondary exits are hard to come by and are limited to specific categories. By that extension, funding is hard to come by as well.

Subscription box businesses are great for consumers but not great enough to retain their attention and spend.