Mumbai-based Roy drove a tourist taxi for 10 months after she lost her husband, in 2007.

"Revathi Roy' is a story of the power of passion that has helped her "drive' down smoothly through various speed breakers in life. Be it in 2007, when she lost her husband or in March 2016, when she launched India's first all-women hyperlocal delivery start-up Hey Deedee (double "e' instead of "i'). Roy created value not just for herself but for other women too. In between, she had already launched and exited two other ventures.

Mumbai-based Roy drove a tourist taxi for 10 months after she lost her husband, in 2007. Fortunately, in the same year itself, she was able to build a business around taxi service called Forshe. Though her husband had several businesses running including leather, software, automobile spare parts, but Roy preferred to walk her own path. An economics graduate from the University of Mumbai, Roy, earlier worked in the marketing department for companies like Times Group and India Today. "After I lost my husband, I didn't have anything to fall back on. I couldn't run the family business not just because it wasn't structured but also because I lacked basic knowledge about it," says Roy. 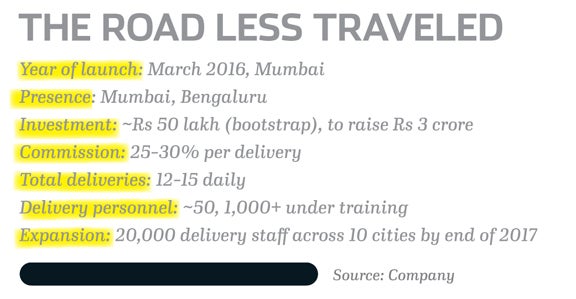 Roy's all-women taxi service even attracted investment from ORIX Group, Japan's financial services company that helped her scale up to around 30 cars. However, eventually the marriage between the two didn't work and Roy exited Forshe in 2009. She again experimented with the all-women taxi service, Viira Cabs, which she launched with AAP's national spokesperson, Preeti Sharma Menon, but exited from it too in 2012.

Before launching Hey Deedee, in March 2016, Roy was hired by Singapore-based social enterprise, iCare Life, in 2014, where she set up training hubs for women drivers. However, in March 2016, Roy realized of last mile delivery is a significant area of opportunity and launched Hey Deedee. "I realized last mile delivery service is a problem and every e-commerce company is looking for more and more delivery personnel," say Roy adding, "We have become a vocational training partner with the government of Maharashtra's skill development council." Roy has invested around Rs 50 lakh bootstrapping Hey Deedee and is looking to raise Rs 3 crore from a social impact fund.

Hey Deedee delivers everything from gifts to grocery, documents, food, courier, etc., taking a cut of 25-30 per cent on every delivery. It currently does 12 to15 deliveries daily and will be launching its app in two months. It currently has more than 1,000 girls under its training and around 50 girls on-the-job in Mumbai and Bengaluru. The start-up will be expanding to Chennai, Nagpur, Pune and Nashik in next two-three months. By 2017 end, it will be looking to get 20,000 women on its platform, in across 10 cities along with Rs 3-4 crore in revenue.

Roy is very clear about her vision with Hey Deedee. "We want to be the biggest logistics company in the world, which is all women," maintains Roy. Despite having success with every venture, Roy still relishes her days of driving a taxi in Mumbai. "Despite all that I have done so far, driving taxi was when I had maximum fun in my life because that concept never existed in India and here I was - a woman taxi driver," concludes Roy.

The platform plans to use the funding to scale its personalized advisory-driven e-commerce offerings through Krushidukan, a one-stop shop for agricultural inputs

As Nokia and Disney Star Share Their Metaverse Plans, Meta Struggles To Built a Horizon Worlds User Base

The latest developments in metaverse includes announcements from Nokia, Disney Star and Meta