Angel tax (section 56(2)(viib)) is a unique artefact of the Indian tax code as it taxes capital receipt. The section allows for the difference between the valuation at which a private company raised capital versus its fair market value to be taxed as income. While this sounds fair in theory, its practice has become pernicious in recent years. Though the law affords the assessee company a choice between valuation methods, either net asset value or discounted cash flow, there's been an alarming movement of tax officials either completely disregarding the valuation method chosen or comparing performance against projections and taxing the difference.

This arbitrary abuse of discretionary powers strikes ignores a fundamental tenet of business and life: things don't always go according to plan. But if suspends disbelief and indulges in this ignorance, one needs to ask why only private companies and not public companies are being unjustly targeted and discriminated against?

This is especially important since startups under DIPP regulations need to be a private company and are directly exposed to this draconian measure and have been beleaguered by it repeatedly.

When this section was instituted into the Income Tax Act by the UPA government in 2012, it was part of a series of measures to prevent the laundering of black money through companies via investments at a high premium when no business case existed. But in spite of a new & stringent Company's Act in 2013 which only allows for investments via bank transfers & not cash, multiple filings for any capital raise, removed any arbitrage or advantage of fundraising methods between public and private companies & categorically insists in the company identifying the potential investor, the account from which he's investing and other intimate details, this angel tax section still exists on the books and as a sword of Damocles above every startup's head.

In spite of these measures of rationalisations, why are only private companies discriminated against by this law? If it's about information, it's the same Company's Act that applies to both public and private companies with the same information and filing requirements, so that can't be it. If it's about the source of funds, both require any investment to come from a bank account and not by cash. If it's about the size of the business, there are plenty of large privately held companies that choose not to go public and are larger than many publicly listed enterprises. If it's about governance, SEBI has done a remarkable job of chastising those who flout the rules and sophisticated investors ensure good governance, anti-fraud measures and adequate checks are in place for every company they invest in (hence the 100-page agreements that accompany every round of funding).

So, it begs the question: why are the capital raises of only private companies subject to this arbitrary rule?

Several startups have seen the tax officers arrogate themselves into an investor's shoes and decide what the startups' true value is thereby taxing the difference as income. They do this in 2 ways:

Both these methods are illogical, unfair and downright discriminatory

Any elementary finance book prefaces itself by stating that valuation is an art as opposed to a science. Valuation methods are tools that can be used depending on the context and different methods yield different values.

Book value as a means of valuation is the per Share of the net worth of the company (assets minus liabilities divided by the number of shares issued). It's also called the liquidation value as it's the value a shareholder receives if the company winds up or liquidates. In essence, it only looks at the value as of today and disregards any future changes In the Business.

So why are ongoing businesses that raise funds from investors based on future growth and earnings valued by the tax department on the basis of their assets today?

Startups today value themselves on being asset light and running lean, hence their only tangible assets are laptops, hardware and cash - not plants, machine, land building and the other assets book value measures. Then technology and code they create are written off as expenses by prudent management since the quantification methods given in the Indian Accountant standards cannot reflect the actual value ( for those interested, this is covered in Accounting Standard 26)

So using Net Asset Value to value growing companies is like measuring time in light years - it sounds reasonable at first glance but displays a deep ignorance of the matters at hand.

In theory, there's no difference between theory and practise. In practice, there is.

No business runs exactly as per an excel sheet and anyone believing in the same ignores a fundamental force of finance – risk. In finance, the risk is a tool to measure uncertainty – from the uncertainty of attrition, technology, strikes to even force majeure events like natural disasters and acts of God (and government). These factors, often out of control of the entrepreneur's hand, dictate the company's ability to meet their numbers and their confidence in the same. Investors and market forces either discount or deify businesses on the basis of these plans and their ultimate consummation. If a company has reasonable plans and regularly meets its numbers, investors swarm to these companies and give them a premium; if they don't, these companies can't raise capital and are either shut down or acquired.

It's these same market forces that govern private or public companies, albeit with different scales. Public companies enjoy a liquid market where price discovery is instantaneous, whereas private companies need to seek out investors and based on their business and performance, enjoy a valuation given by these investors.

If a public company fails to meet its numbers, its valuation decreases and its stock price tanks. Similarly, if a private company dithers, it either fails to raise funds or takes a beating on its valuation. Since the principle and mechanism are the same between the two systems, why are only private companies forced to justify their performance to the tax officials as opposed to the people who Invested their hard-earned money into these companies?

If the government dared to tax the difference between IPO prices and the current market prices of companies, 62.9per cent of IPOs firms from 2008-2014 would have to shell out taxes on these mark-to-market losses 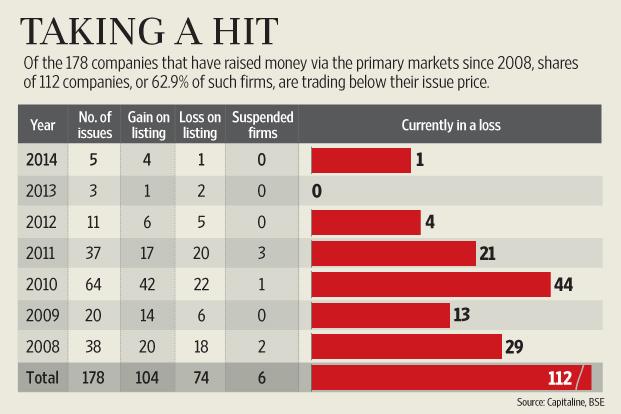 Adam Smith's four canons of tax, which underpin any fair system of taxation today, stress on the following 2 principles

Since the angel tax fails every measure of equity, (things above), why should it still exist as a tool of taxation? Why are startups which the government has publicly articulated to promote, being discriminated against in this fashion? Why are Indian investors, who represent only 10per cent of investors in the ecosystem targeted specifically?

The only two certainties in this are death and taxes and the latter should never lead to the former.

Siddarth Pai is the Founding Partner of 3one4 Capital, an early stage Venture Capital Fund house based in Bangalore with cumulative assets under management of over 100 million dollars.

He also works extensively on policy for startups & investors. He is an expert policy member of ISPIRT, the Indian Software Product Industry Round Table, a Bangalore based think-tank & member of the regulatory affairs committee of the IVCA. Siddarth was part of the team that was petitioning the government to change the dreaded “Angel Tax” regulations in India and is currently working on the “List in India” and “Stay in India” initiatives.

Murmu reportedly highlighted that it's again crucial for SAIs to build the necessary skills to examine information system controls, given the shift to electronic processing and computerized systems in public sector entities