LivSpace builds a $100-million business in less than 5 years

By Punita Sabharwal
July 12, 2019
Opinions expressed by Entrepreneur contributors are their own.
You're reading Entrepreneur India, an international franchise of Entrepreneur Media.

As I walk into Livspace's designer office in Mumbai, I feel the full impact of what Anuj Srivastava and Ramakant Sharma have to offer to scores of middle-class families who dream of building their homes with shoestring budgets. The Livspace experience centre has it all. Take a look. The showroom like space is sprinkled with various designs for bedroom, living room, kid's room, kitchen, et al. It also houses meeting rooms to have a detailed chat with customers on the kind of interiors and furniture they wish to have. There's a special virtual reality room too where clients can get inside their artists'
renderings.

This tech start-up operates very much like a virtual space with CEO and Co-founder, Anuj Srivastava, functioning from Singapore half of the year, and Ramakant Sharma, COO and Co-founder, manning the fort in Bengaluru. How do they manage from different locations? Apart from tapping each other for ideas on almost 24/7 basis, both have their boardrooms fully equipped with facilities like video conferencing to chalk out execution strategies. "We have aspirations beyond India, at some point in time, the idea should go out," says Srivastava.

The Indian pie is large, too. India's fragmented home interiors and renovation market is expected to exceed $23 billion by 2022. And Livspace is sure fast carving a niche for itself here.

Like every other romantic start-up story, Livspace has its roots in IIT. Srivastava and Sharma, IIT Kanpur grads, spent some quality time honing their skills at some of the best start-ups. Anuj worked in Silicon Valley at Google while Sharma was in Bengaluru with Myntra. "India now is at a level like the Valley of the early '90s. So, for people to have an entrepreneurial instinct and not to do an idea at this point in time is an opportunity lost," says Srivastava. 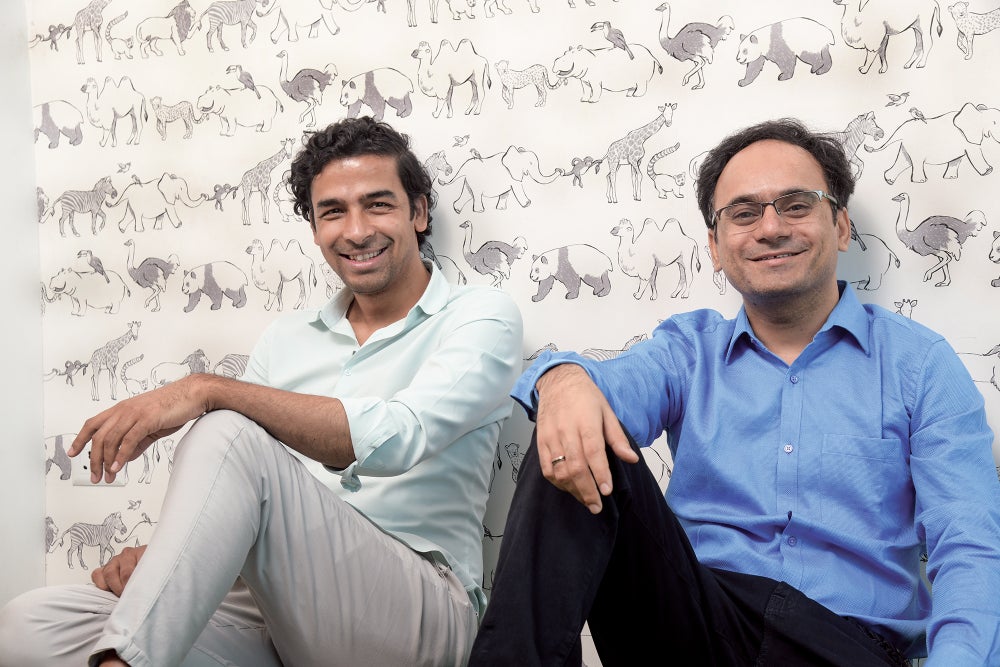 The opportunity for the Livspace founders came literally knocking. As they have no experience or education in design, they faced multiple problems while designing their own homes. As they walked into the idea of Livspace, they started addressing the various concerns of middle class. Livspace brings the affordability package into play, offering customers distinct designs from the best designers.

This Uber-like model of aggregation has worked well. Sharma says, "95 per cent of India living in the metros would traditionally call carpenters, labourers and contractors. They are now getting the experience which is program-managed by someone from the design industry."

To make it all happen, Livpsace has on board 500 vendors and 3000 designers. The margins stand at a good 40 per cent, helping them make money at every order. This high-margin structure will find further growth if it launches a private label. Currently, it has partnered with brands like Hettich and start-ups like Urban Ladder to make their products available to the customer. Today, modular and wardrobe line of business alone accounts for 45 per cent of Livspace's revenue.

Livspace, which started from Bengaluru on a smaller scale, began its expansion in 2016. It is now on full throttle.

Srivastava explains, "Genzler in San Francisco, founded in 1965, is the largest interior designing agency on the planet. Since its founding year till now, it has worked on 10,000 projects. So, on a yearly basis, Livspace will actually do about 12 to 15,000 homes at the capacity at which we are operating today." It's the same analogy one would apply while comparing an OYO with the likes of a giant like Marriott. He says, "So you can think of an elephant which nobody has seen, actually, the home design of real estate transformation is a kind of a problem of that class."

In a way, Livspace has aggregated the spread of micro agencies operating a platform for customers, designers, vendors and bringing them all together on a cloud. Young designers like to be on the platform for entrepreneurial freedom. Citing reasons on why suppliers stick to the platform, Srivastava explains, "They are getting a steady business, they don't lose their margin, they can plan their labour, working capital, all in a much more predictable way. Designers are actually getting all the power of technology; they don't have to go find vendors."

From a vertical marketplace, it comes in easy for them to expand horizontally. Srivastava says, "There is a reason Amazon will not get into this space. It includes nuances of supply chain to make it really organized in a certain way, than there is a design
selling process."

Last year, Livspace raised $70 mn in its Series C round of funding. Most recently, the franchise arm of Ikea, Ingka Investments, chipped in with minority funding. "It demonstrates the universality of our idea; I'm sure in the race, they would have potentially checked all over the planet to find such kind of ideas," says Srivastava.

"We believe Livspace has created a digital platform that has the potential to transform a customer's home furnishing journey. This minority investments aligns closely with the digital direction of Ingka Group and our core business, IKEA Retail, and we are looking forward to exploring new opportunities together with Livspace," agrees Krister Mattsson, Head of Ingka Investments, Ingka Group. Srivastava shares, "At the top line, the growth will organically make the business profitable. I don't
think we want to artificially induce profitability this early in the company as aspirations are more
significant to invest in growth."

Livspace is comfortably ensconced in its niche joining hands with the best of investors such as Bessemer, TPG Growth, Goldman Sachs, Jungle Ventures and Helion. "We like working with the type of investors who take a long-term call. Our board meetings tend to be not only financial but also delve deep into strategic areas so that they're collectively able to add to a lot of our thinking. So you're trying to raise just about appropriate capitals that you don't dilute too much, but you're raising enough to keep you capitalized," adds Srivastava.

However, Sharma is quick to underline the hardest part of the journey so far. "Figuring out that recipe and ingredients is a difficult job. It's not that we woke up one fine day and things came easy to us. We have experimented extensively. And we continue to do that," he admits.

To ensure a great customer experience with the best of technology, Livspace already has on board 100 engineers out of a team of 2000 working on complex designs, AI, image processing, supply chain, etc. Sharma says, "People are spending at least a minimum of two and a half thousand dollars all the way up to sometimes $50,000." Owing to this, they came up with building offline experience centres to let customers touch and feel before finalizing the design. He adds, "At some point in time, we'll start exploring office space, the platform fundamentally has capabilities to really do any sort of real estate design."

Livspace founders believe there is always room for more ideas. The logic has driven them to invest in close to 35 start-ups. On the kind of idea they back, they say in unison, "Great founders with great companies will come up with the right kind of idea. Instinctively, it can actually make money. That's already a good start. So typically, we participate in relatively early seed stage series, where tickets could range from $15,000 to $25,000." And they keep it all simple. "So you invest in 35 companies on an average, they have two founders, and you have 70 good friends. They are actually the people you want to hang around with. It's a hobby and interest and you feel like connected to these guys," laughs off Sharma.

As the namesake goes, both the founders believe in living in the moment. Whether the home design bet of Srivastava and Sharma pays of is what remains to be seen.