Ola Timeline: The Tale of an Indian Consumer Startup Turning Into a Global Mobility Giant

Let's get on board Ola for a flashy flashback

How often do we opt to cab it today? Pretty! Booking a cab on a few clicks seems like an everyday activity today for office goers and long-distance travellers. Had it been a few days ago, the case was not the same. Hailing taxis was among the last of options on the list of everyday commuters until the entry of an internet startup that was destined to change the way India travels.

This is Ola's, Startup Story!

3 December 2010 marked the historical date when India produced its own rival to the world's largest cab aggregator Uber in form of Ola. Founded by Bhavish Aggarwal and Ankit Bhati, the ride-hailing startup initiated operations in Mumbai before shifting base to Bangalore. 2011 brought along a wave of investments that breathed life into many enterprising start-ups.

Within 2 years of launch, Ola was successful in pocketing two cheques from big investors like Tiger Global and Matrix Partners. The startup was able to create a much-required hype around the ride-hailing business and bring the otherwise hesitant commuters to cab it! While India was opening up to taxis, auto remained to be a comparable economic source of travel.

Taking the aspect into consideration, Ola incorporated autos into its application in 2014. The step helped the startup elevate its status to a billion-dollar entity the next year. Ola became a Unicorn in 2015. The same year, it acquired its crosstown rival TaxiForSure for $200 million only to shut down its business the next year.

While 2016 was relatively a laid back year for the consumer brand, not many would have anticipated such a striking comeback. Not only did the firm raise a staggering $1.1 billion funds led by led by Chinese Internet conglomerate Tencent and Japan-based SoftBank but also acquired the food tech startup Foodpanda.

Needless to say, 2018 was a bombastic year for the Indian unicorn. Apart from acquiring the public transport ticketing app, Ridlr, the firm indulged in financing a startup for the first time ever. Ola invested in Scooter rent startup Vogo and launched its international operations starting with Australia, followed by the UK and New Zealand.

Having established itself as one of the internet majors in the mobility space, Ola has been making efforts to gain market leadership against rival Uber, the most-valuable startup in the world through various efforts. Now that Uber has filed for an IPO, it would be interesting to see Ola's next act to overtake the ride-hailing giant.

Looking to take on Uber that has targeted India as a priority market outside the US, Ola is looking to raise over $1 billion in Series J round of funding. In a major boost, the start-up received around $92 million from Flipkart co-founder Sachin Bansal. This marks the largest investment by an individual in Ola to date.

Commenting on the investment, Sachin Bansal had stated, "Ola is one of India's most promising consumer businesses. On one hand, they have emerged as a global force in the mobility space and on the other, they continue to build deeper for various needs of a billion Indians through their platform, becoming a trusted household name today."

Earlier in January, Ola raised $74 million from its existing investor, a Hong Kong-and London-based hedge fund, Steadview Capital, through preference shares at a subscription price of $301 per preference share. The funding round is expected to take Ola's valuation to over $6 billion. Ola is currently operational in over 100 Indian cities and towns with a network of more than 10,00,000 vehicles. 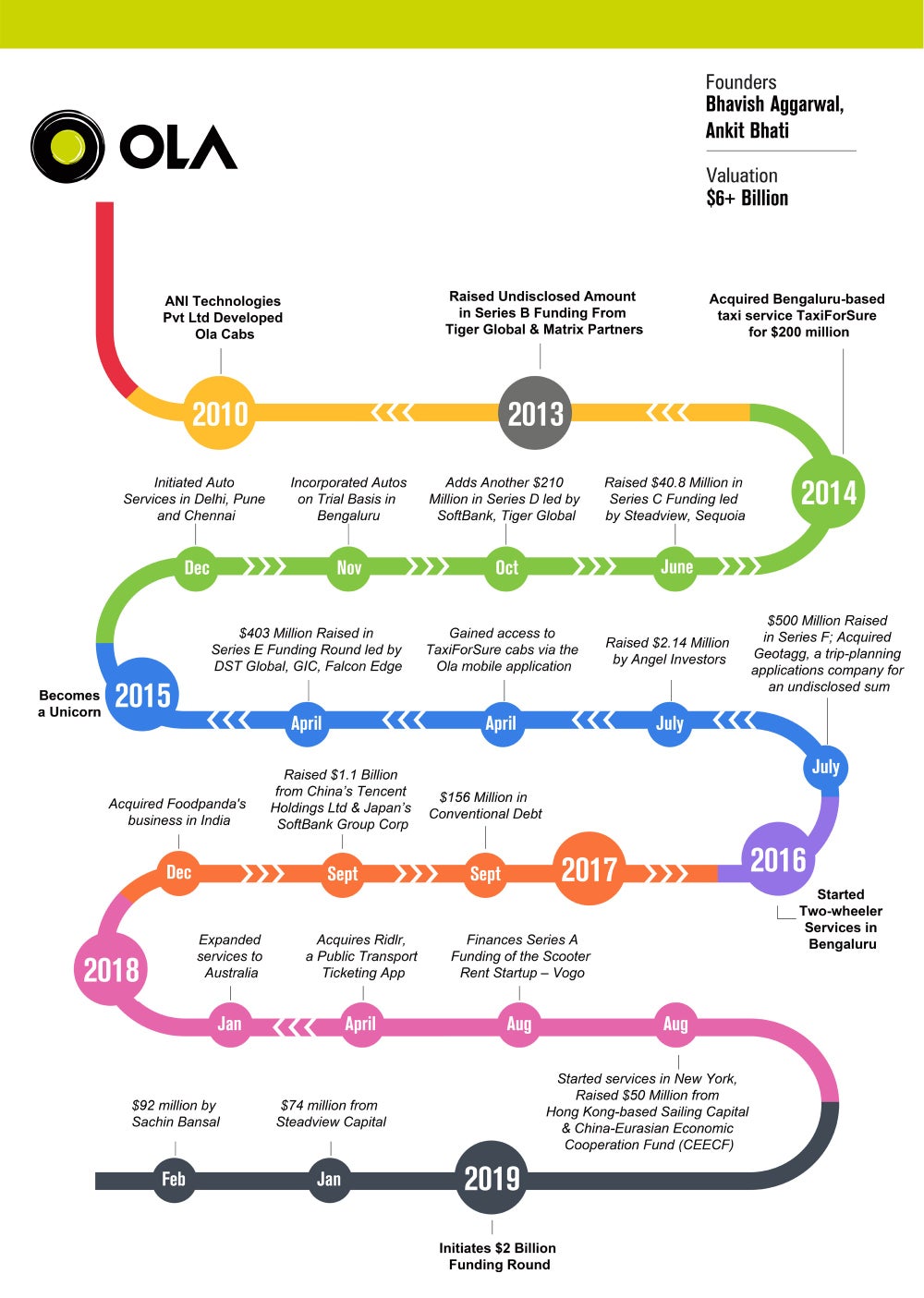