Coronavirus: Even In a Post-Crisis World, Expect Drastic Changes In Consumer Behavior

According to a study by consulting firm Hammerkopf, 65 per cent respondents said they believed it would take anywhere between six to twelve months for normalcy to return.

As the Coronavirus pandemic continues to wreak havoc across the world, with countries struggling to contain its spread and economies taking a subsequent hit, consumer perceptions are likely to change drastically going forward, as per a study by consulting firm Hammerkopf.

The "State of Mind' study, that was conducted across eight Indian cities, and covered 3,500 adults, found that 65 per cent feel it would take anywhere between six to twelve months for normalcy to return. All the responses were collected between March 30 and April 6.

45 per cent of the respondents said they would retain their "lockdown mindset' even when things are better, with an emphasis on spending less and saving more.

Several ratings agencies have already cut growth rates for India and the global economy, with fears of a massive recession doing the rounds. In an earlier note, analysts at Nomura had said that as corporates will see profits squeezing, they would likely delay capital expenditures, lower salaries and cut jobs, in turn, hindering consumer demand. 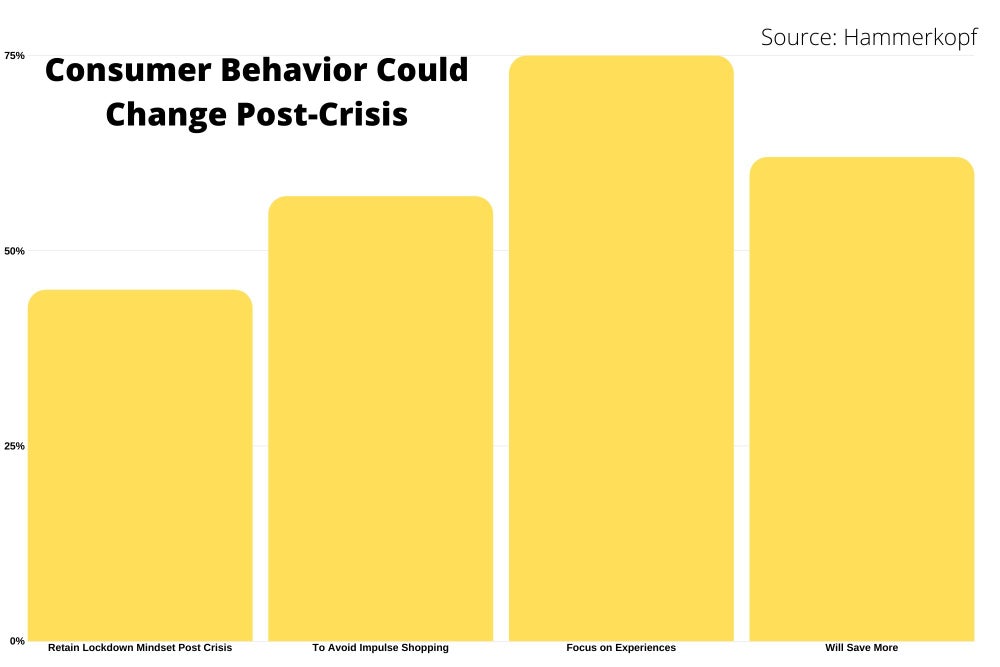 According to the study, 63 per cent respondents believed their earlier behavior of buying products they considered as essentials was wrong, with 57 per cent intending to make a drastic shift in their impulse shopping and overall buying practices.

Among the worst affected during the pandemic are consumer device companies, for whom, orders have come to a screeching halt and for many who depend heavily on manufacturing in China, the situation is more dire. Even in a post-crisis world, things could be hard for these firms. The study found that 75 per cent would now focus on experiences instead of buying the latest consumer devices.

One interesting finding of the study was that 82 per cent indicated they will now prefer supporting local businesses, and would aim to buy locally-sourced products.

From a work perspective, nearly 44 per cent said they would expect to continue to have the option of working from home and 52 per cent feel the emphasis would have to shift from accountability to measuring outcomes.

"Our research clarifies what's at stake as we move forth to a post-virus world, and how enterprises should respond to the crisis, and instil confidence in their employees, customers and communities alike," said Namagiri Anand, managing partner at Hammerkopf.

At a more personal level, 49 per cent said they were taking the lockdown period to reconsider their life choices while 31 per cent have been putting on hold or postponing major life decisions.

Zero custom duty will be effective from April 1, 2023