Is the Indian Automobile Industry Moving Towards Fast & Furious Days?

Amid challenges, India has emerged as the third-largest auto market in the world. The sector is currently battling supply chain constraints and companies are ramping up capacities in India. As new regulations are set to kick in, the industry is pulling up its socks to stay ahead of the curve

By Shrabona Ghosh
January 23, 2023
Opinions expressed by Entrepreneur contributors are their own.
You're reading Entrepreneur India, an international franchise of Entrepreneur Media.

In 2022, India surpassed Japan to become the third-largest auto market in the world, while this is a milestone for the industry, the sector is yet to navigate the speed breakers: For months together the automobile sector was bogged down by supply chain constraint, coupled with new regulations around airbags and stricter emission norms. So, are we over it and heading towards a velocity recovery?

There have been multiple supply chain challenges in the recent past due to semiconductor shortages, congestion at ports, European energy crisis and labor strikes, commodity prices increase, lockdowns in global production hubs such as China, low visibility across the value chain tier suppliers. "The average delivery lead time for chips increased from 8-10 weeks to over 20 weeks over a period of 18 months. At the same time, demand for chips has been increasing with the booming 5G ecosystem (data processing and telecommunication), smartphones, consumer electronics and increased mobility needs of consumers. This mismatch of demand and supply is likely to continue in the coming year as well," said Rajat Mahajan, partner, Deloitte India. 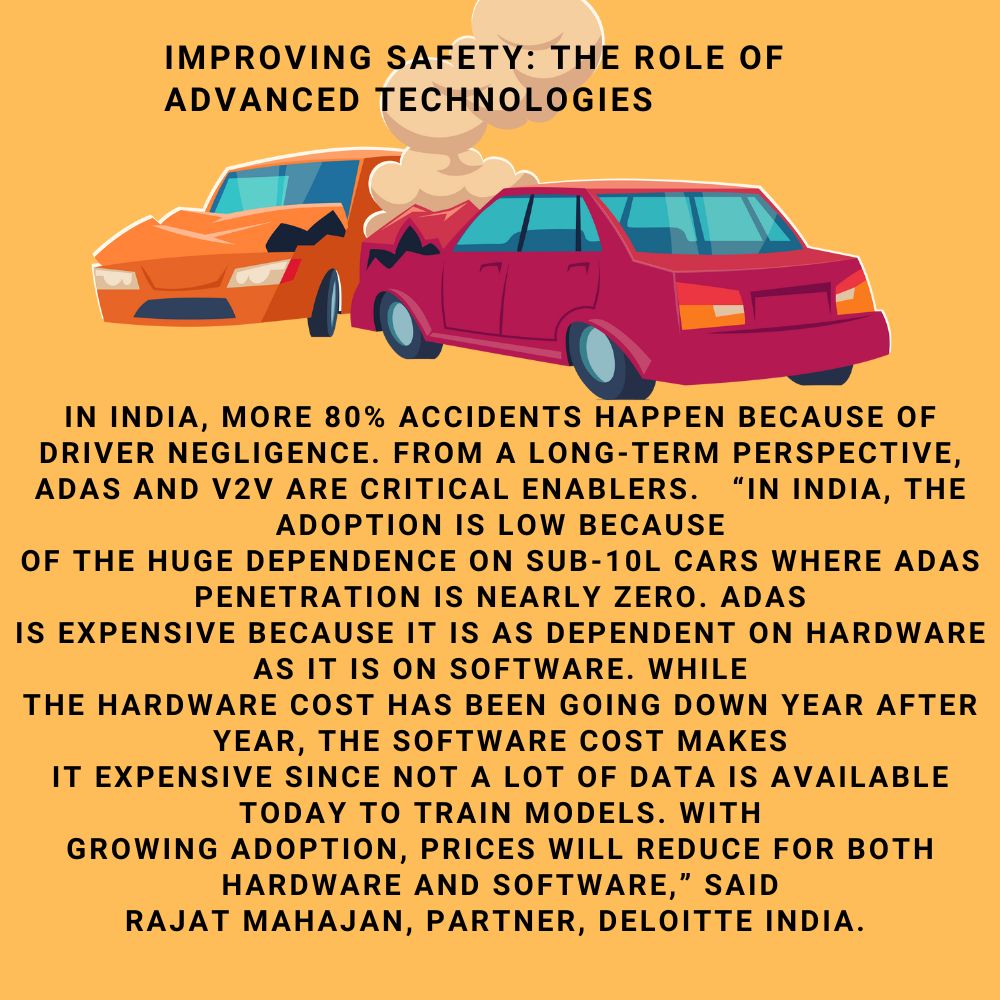 Several industries including automotive are deploying guardrails through short-term and long-term strategies to keep their supply chain resilient in these tough times. Few immediate actions adopted by players are increased visibility to upstream semiconductor suppliers, activate dedicated teams to secure capacities at tier-II and engage alternate suppliers to secure volumes.

In an attempt to boost market share in India, automobile companies are trying to localize their production. In April 2017, Kia India signed a memorandum of understanding (MOU) with the state government of Andhra Pradesh to build a new manufacturing facility at Anantapur district. Kia commenced mass production in August 2019 and has an annual production capacity of approximately 300,000 units. The brand has a widespread network and is focused on strengthening its footprints across the country. "The commencement of the third shift at our state-of-the-art Anantapur plant has helped us in improving the supply chain. We are constantly trying to localize production and India is our top priority as a market," said Myung-Sik Sohn, chief sales and business officer, Kia, India.

As part of ramping up capacity in India, MG (Morris Garages) Motor India rolled out the first production version of Hector from its state-of-the-art facility at Halol in Gujarat in May 2019. In 2019 MG's Halol plant had a production capacity of 80,000 units per annum and had the provision to increase capacity depending upon the requirement. Fast forward to 2023, the plant has ramped up its capacity to 120,000 units per annum and is aligned with the company's vision of increasing volumes. "It's a constant effort to improve the supply chain from a perspective of timing and quantity. Globally, companies suffered due to shortage of semiconductors, chips, logistic issues and things are easing out. Hopefully, we will see improvement this year," said Gaurav Gupta, chief commercial officer, MG Motor India.

According to a McKinsey & Co. report released in December 2022, automakers and their key suppliers are rethinking their supply structures in the face of the global pandemic and increasing political instability. Many are acknowledging the growing need for more localization due to the new global supply risks and tougher regulatory stipulations. What's more, the continued consolidation of the supply base could give some vendors monopolistic advantages over automakers.

India's top carmaker, Maruti Suzuki, has been working to improve its production capacity and focusing on building a resilient supply chain. According to a PTI report, Maruti Suzuki India (MSI) is likely to increase the production capacity of the Manesar plant by one lakh units to cater to the enhanced demand before its Sonipat facility commences operations in 2025. "The sector is plagued by semiconductor shortage, while 95 per cent of the issue is resolved, it would take some more time for a complete revival. Due to the shortage of chips we have not been able to supply the desired quantity of certain models and there is a long waiting list. We have around 366,000 pending bookings. While globalization enables capacity consolidation in different factories and helps in economies of scale, to make supply chain resilient we need to shift some high risk items capacity within the country," said Shashank Srivastava, executive director at Maruti Suzuki India Ltd.

Recently, Maruti Suzuki recalled 17,362 units of its six models, Alto K10, S-Presso, Eeco, Brezza, Baleno and Grand Vitara, to rectify a possible defect in the airbag controller. "The recall undertaken to inspect and replace airbag controllers ("affected part"), free of cost, if required in these vehicles. It is suspected that there is a possible defect in the affected part, which in rare cases might result in non-deployment of the airbags and seat belt pretensioners, in the event of a vehicle crash," the company said in its regulatory filing.

The ministry of road and transport and highways, in January, 2022, proposed vehicles of category M1, manufactured after 1st October 2022, shall be fitted with two side/side torso airbags, one each for the persons occupying front row outboard seating positions and two side curtain/tube air bags, one each for the persons occupying outboard seating positions. The move aims to enhance safety, however, after considering objections from stakeholders, Union minister Nitin Gadkari said the mandatory six airbags rule for passenger cars will come into force in October, 2023.

As per information available with Society of Indian Automobiles Manufacturers (SIAM), out of the total monthly sales volume of 327,730 passenger cars, only 17 per cent of cars totalling 55,264 are fitted with six airbags. Airbag consists of the airbag cushion, a flexible fabric bag, an inflation module and an impact sensor.

In a written reply to Rajya Sabha in December, Gadkari said, "As per Automotive Component Manufacturers Association (ACMA), the current airbag manufacturing capacity in the country is 22.7 million and estimated increase in production for next year is 37.2 million. The production-linked incentive (PLI) Scheme, notified by the government for automobile and automobile components inter alia provides incentives for airbags applications viz. inflator for airbag, airbag electronic control unit and sensor for airbag."

On average, adding just the frontal airbag to a car, costs between INR 1,800-2,500, while a side and curtain airbag can cost much more, excluding the cost of additional wiring and electronic components. "If you add up all the costs, this would mean that each car sold in the small to mid-level segment would get a minimum price hike of approximately INR 25,000 to over INR 35,000," added Mahajan.

Inflators are a safety critical component. Until the recent past it was imported and now some auto component makers have localized this part, but it will take time to economies of scale to bring cost down. "Since India is largely mid-sized cars and compact SUV market, adding INR 35,000 will result in increasing prices by 3-6 per cent (considering vehicles are sold are in the range of 6-12 lakh), and the time to redesign the vehicle will be a challenge as it will require modification of panels, wiring and control systems. Hence, price increase coupled with a tough timeline to implement can affect the sales of cars," added Mahajan, partner, Deloitte India.

Maruti Suzuki India had earlier said the six airbags norm would adversely hit the shrinking small car market and the auto major noted that the regulation would largely impact the cost-sensitive entry-level car segment. "The industry is discussing the regulations, the price hike will vary from model to model, we have to wait until the final regulation kicks in. The change in airbags would be accompanied by many other developments such as introduction of new features, body changes, among others," added Srivastava of Maruti.

The prices of passenger and commercial vehicles would see a hike as automobile companies are investing in upgrading vehicles to meet stricter emission norms that kick in from April this year. In order to keep the growth momentum, the sector has to be dynamic and agile in adapting to new scenarios amid challenges.