Global tech giant Microsoft has launched a programme to help the growth of business to business (B2B) start-ups in India that operate on a Software-as-a-Service (SaaS) model. As part of the programme, named 100X100X100, 100 companies would commit to spending $100,000 each over 18 months on solutions provided by the early and growth stage start-ups.

This announcement was made during Microsoft chief Satya Nadella's ongoing three-day India trip. The latest initiative is part of the Microsoft for Startups programme. 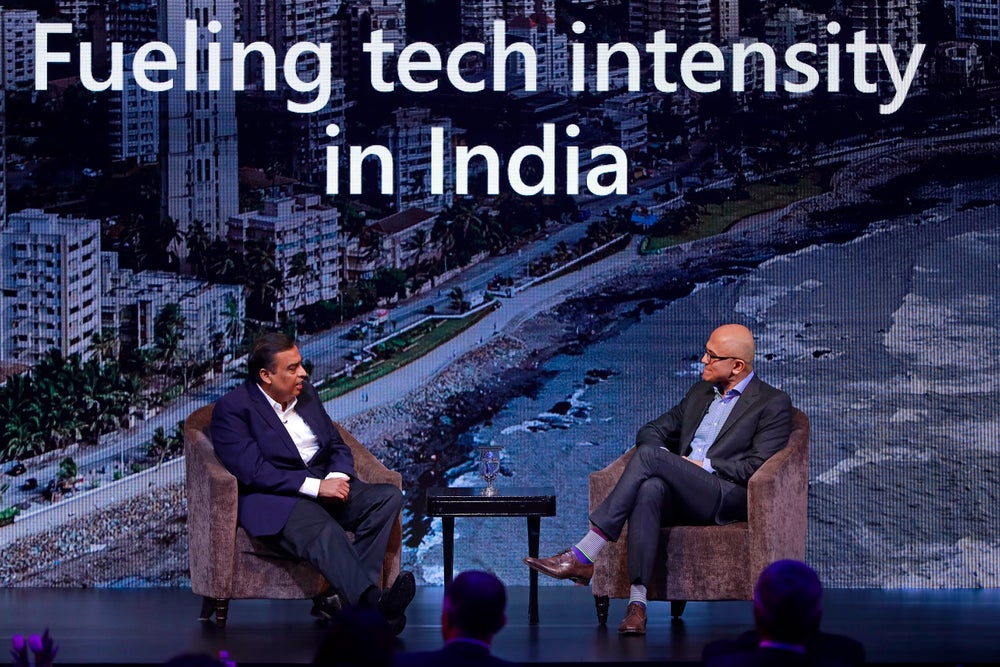 Nadella addressed industry leaders at the Microsoft Future Decoded: CEO Summit event in Mumbai on Monday. On what was the first day of his visit, he also sat down with Mukesh Ambani, chairman of Reliance Industries and India's richest man, to talk about how building tech intensity across organizations can benefit the country's economy and the society.

Microsoft and Reliance had forged a partnership last year wherein it was announced that all of Reliance Jio's internal employees would be moved to Microsoft Office 365 and Jio would shift all of its existing software applications to Microsoft Azure Cloud.

Ambani hailed the partnership on Monday during his interaction with Nadella and said it would define the decade.

Tech giants including the likes of Facebook and Google have all been investing and focusing on the start-up ecosystem in India, which has seen itself growing steadily in size and stature over the last decade. Redmond, Washington-based Microsoft has come up with programmes like Microsoft for Startups and its corporate venture fund M12 to cash in on the landscape as well. It also has a ScaleUp programme, designed for Series A-C startups.

In June last year, the company announced plans to invest up to $10 million in Indian start-ups.

At launch, the programme already has more than 50 start-ups.

According to Microsoft, the programme will make available a variety of curated, ready to launch, enterprise grade solutions from startups with a proven track record. The aim is to create a profitable domestic market for the Indian B2B SaaS segment by increasing their revenue and customer base.

"India has one of the largest B2B SaaS startup ecosystems in the world, and it's growing exponentially. This initiative will help build scale and create amazing opportunities for startups," said Anant Maheshwari, president at Microsoft India, in a statement.

Start-ups in the programme will have access to regular speed-contracting sessions with prospective customers at Microsoft industry and customer events. It will be conducted with the help of partners and industry associations in the ecosystem including the Delhi and Mumbai Chapters of The Indus Entrepreneurs.