The Rise and Fall Of Chanda Kochhar; a Banking Empress

From a management trainee to heading one of the leading Indian banks, Chanda Kochhar proved her mettle and prowess early in her career. However, what seemed like an impeccable and exemplary work life soon saw the Kochhar's time as an integral member and eventual head of ICICI bank be deemed immoral.

On 23 December 2022, former ICICI MD and CEO Chanda Kochhar and her husband Deepak Kochhar were arrested for involvement in the Rs 3,250 crore Videocon scam.

Let's take a glimpse of the ups and downs into the life of the first woman and the youngest CEO to head ICICI Bank. 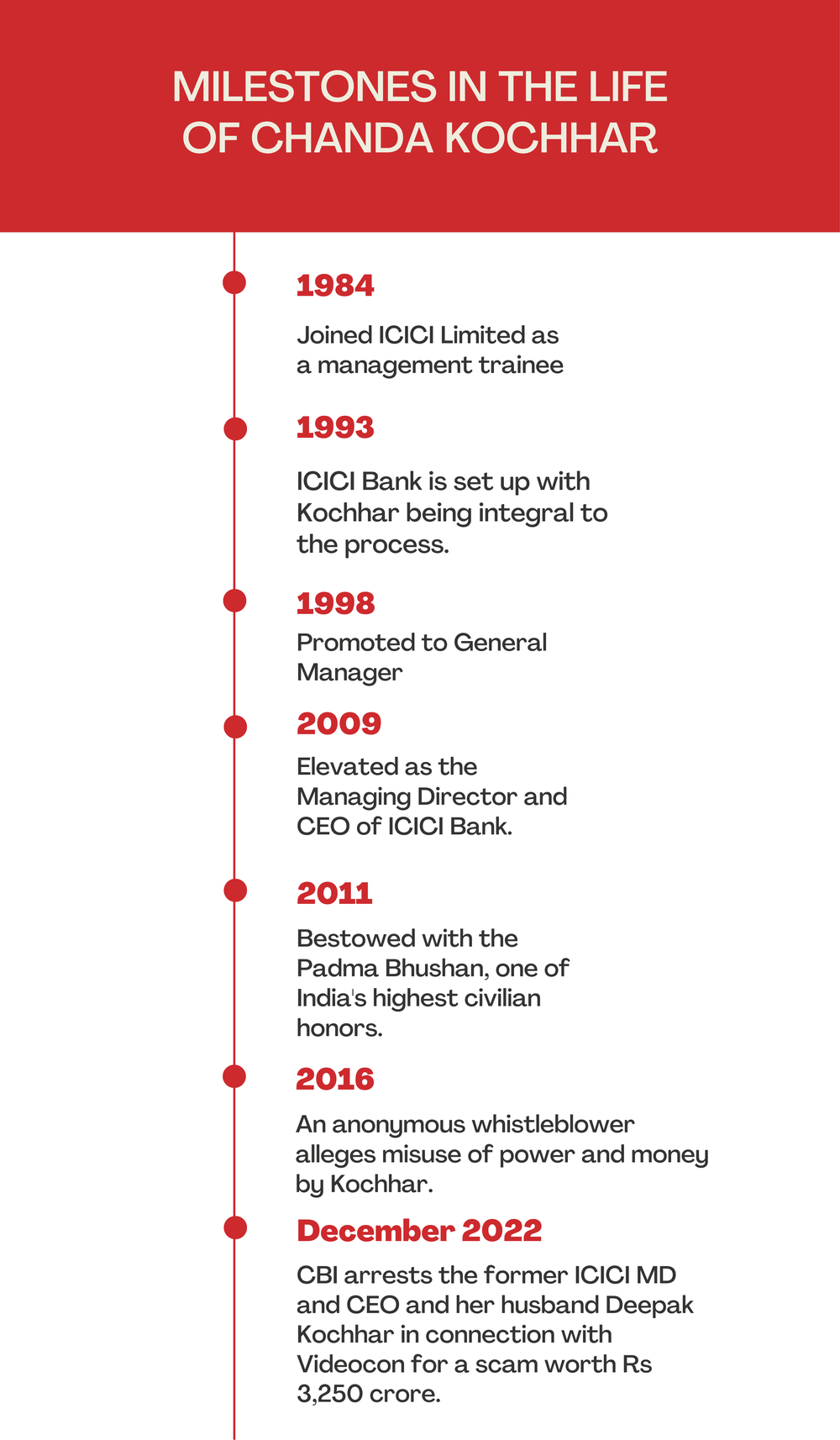 1993- The commercial banking vertical, ICICI Bank, is set up with Kochhar being instrumental in the proceedings.

1999- Took additional charge of heading the strategy and e-commerce divisions of ICICI.

April 2006- Appointed as the Deputy Managing Director of ICICI Bank.

2009- Elevated as the Managing Director and CEO of ICICI Bank, succeeding KV Kamath as the bank CEO.

2011- Bestowed with the Padma Bhushan, one of India's highest civilian honors.

2016- An anonymous whistleblower writes to Prime Minister Narendra Modi and Finance Minister Arun Jaitley alleging misuse of power and money by Kochhar to fund her husband's renewable company, NuPower Renewables Pvt Ltd. No action is taken and the incident dies down.

March 2018- The letter resurfaces on a blog and attracts attention from the public. ICICI refutes the claims made and defends Kochhar publically. Despite the support, the Central Bureau of Investigation initiated a probe into the matter.

October 2018- Kochhar steps down amid corruption charges and media and public scrutiny.

January 2019- CBI, in its chargesheet, stated that from June, 2009 to October, 2011 the bank under Kochhar saw irregularities and alleged cheating. The bank sanctioned six high-value loans to Videocon, later turning them into Non-performing assets (NPAs), resulting in a loss for the bank.

2019- Following the verdict of Hon'ble Mr. Justice (Retd.) B. N. Srikrishna, who headed the Head of Enquiry into the matter, Kochhar's separation was treated as 'termination for cause' under the bank's internal policy.

2020- The Supreme Court refused to interfere with the Bombay High Court's plea for dismissal of the matter.

23 December 2022- CBI arrests the former ICICI MD and CEO and her husband Deepak Kochhar in connection with Videocon for a scam worth Rs 3,250 crore.