To ease the payment procedure, the government will create a payment platform for MSMEs to enable filing of bills

Departing from the decade long briefcase culture, the Finance Minister Nirmala Sitharaman reached parliament with a traditionally remembered bahi khata that held the gems on announcements to assist the entrepreneurial ecosystem of the country. Tabling the roadmap for becoming a $5 trillion economy, the Union Minister emphasized the role of private sector players in the development of a country's economy.

"If before independence, India Inc understood swadeshi, today they understand Make In India," Sitharaman shared, iterating the relevance of traditional as well as emerging players for India's growth. While inclusion of women in decision-making, ease of living, India's soft power and foreign investments made the highlight of Budget 2019-20, Micro, Small and Medium Entreprises (MSMEs) were not left behind either.

With India having more than 50 million small businesses, the 2019 budget seems incredibly promising for further augmenting their growth and development. Amid a series of proposals and promises aimed at strengthening the Indian citizens, a slew of announcements were targeted at MSMEs too. 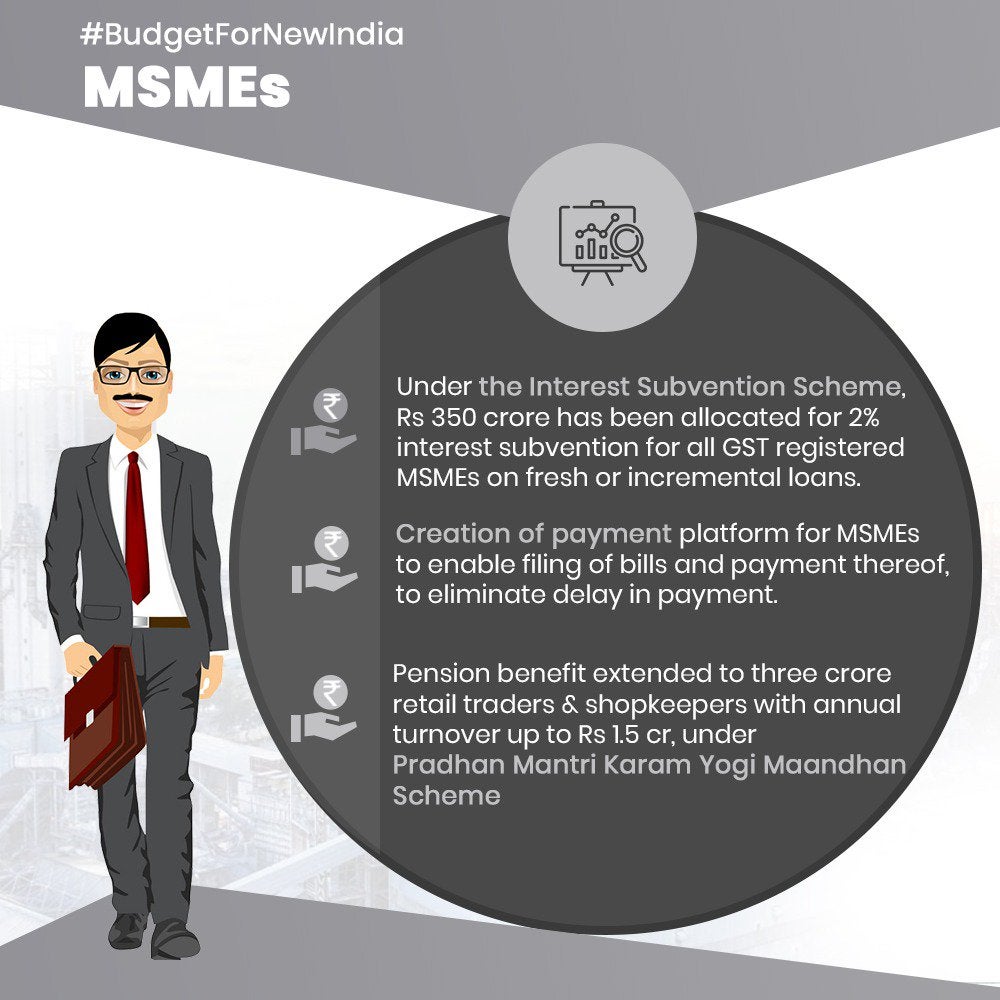 Despite being one of the biggest contributors of the nation's GDP, MSMEs often face credit crunch due to lack of banking support. To ease the loan accessibility, Sitharaman announced, "Under the interest subvention scheme for MSMEs, INR 350 crore allocated for the year 2019 for 2 per cent interest subvention for all GST-registered MSMEs on fresh or on incremental loans."

"By offering credit of up to INR 1 crore within an hour for SMEs, will enable businesses to increase investment in R&D, upskilling and bringing in technological innovations to work," shared Somesh Misra, VP Operations, Deskera. The government announced "59 minute' loan scheme in 2018 promising loans from public sector banks (PSBs) through an online lending marketplace called "psbloanin59minutes'.

Often we hear the cases of payment frauds with bills getting misplaced and improper recording of data, especially for small businesses. To ease the payment procedure and ensure transparency, "Government will create a payment platform for MSMEs to enable filing of bills and payment on the platform itself," stated the Finance Minister.

Lauding the government for taking strong steps to give a big boost to MSMEs and encouraging a cashless economy, Alok Mittal, CEO & Co-founder, Indifi Technologies said, "The budget has contributed to three most important factors for MSMEs-ease of credit accessibility, greater security for small players through the pension offering and greater transparency as well as convenience in tax processes."

Sitharaman also announced that the pension benefits would be extended to 30 million shopkeepers and retail traders with annual turnover of less than INR 1.5 crore under the Pardhan Mantri Karam Yogi Maan Dhan Yojana. Reiterating the importance for transforming India into a digital economy, the minister also shared plans of taking over 100 clusters global.

Vinamra Pandiya, the Founder & CEO of Qtrove.com felt setting up of social stock exchange for listing of NGO's and social & voluntary organizations would empower a lot of entrepreneurs towards setting up of such ventures. "World is moving towards a dangerous tipping point and nature is taking its revenge, it's time more people join the cause of making this planet livable for the next thousands of years."