This Influencer App Platform is Unleashing the Power of Celebrity Engagement

Celebrities, influencers, entrepreneurs and even certain organizations have millions of followers on social media platforms. Be it Instagram, Facebook or Twitter, the renowned names engage thousands of their followers with each of their posts. And engagement brings money. While content is the ultimate king, Celebrity Application Creation company, EscapeX is unleashing the power of "engagement economy" model.

Backed by Monk's Hill Ventures of Singapore and New York-based Tribeca Ventures, the tech-firm founded in 2014 by Israeli software engineer Sephi Shapira, produces white-label apps for artists. The mobile platform aims to monetize social engagement for artists and compensate them for driving engagements, not the networks they use. EscapeX has built a different engagement model; giving the control to creators and not platforms.

Fundamentally, EscapeX is a truly celebrity-owned platform, not a shared one. In a shared platform, as more people join, an individual's reach gets lesser. On social media, celebrities have "accounts' whereas this is an individual platform per artist. "Are you living in an apartment complex or do you have your own bungalow," provided Shamik Talukder, Chief Business Officer, EscapeX.

What's in Store for the Celebs?

Apart from getting 100 per cent access to their hard-core fans, celebrities gain the power to monetize their content through their personally owned platforms (POPs). They can make either an open post, that is for everyone to see or a locked one that is only visible when the visitor pays the required amount. In general, the live concerts and exclusives chat opportunities fall under the locked category.

On Instagram, celebrities earn from third party posts. While they get paid by the brands which have hired them for promotion, they are not earning any organic profits themselves. Both the social network and product brand earn billions through passive engagement, generated by the artists. "Each time, a fan opens a celebrity page, a page view is served, indirectly serving the ad view, adding to the advertising revenue, which goes to the platform whereas the artists get nothing, apart from his fees of course."

The biggest driver for EscapeX is that the majority of revenues generated on the platform go to the artist. "Apart from the branded revenue, celebrities also earn the organic advertising revenue on our platform," Talukder clarified.

Today, EscapeX has become the go-to platform for every influencer, however, it was never meant to be an influencer's platform. The app was designed as a peer to peer platform for people studying or working together to connect. Over time, the developers realized that as a celebrity's popularity grows, urge to have the undivided attention of their followers increases and that's when their platform could have come into play, and so it did.

"We realised that people who have large following would eventually like to move to their own platform where they have 100 per cent access," Talukder stated, sharing the real story behind how EscapeX came to being. So far, the firm has launched apps for the likes of Disha Patani, Nargis Fakhri, Ravindra Jadeja, PV Sindhu, Sunny Leone, Pankaj Advani, Shaan, Remo D'Souza, Kajal Agarwal and Rakul Preet Singh in India. 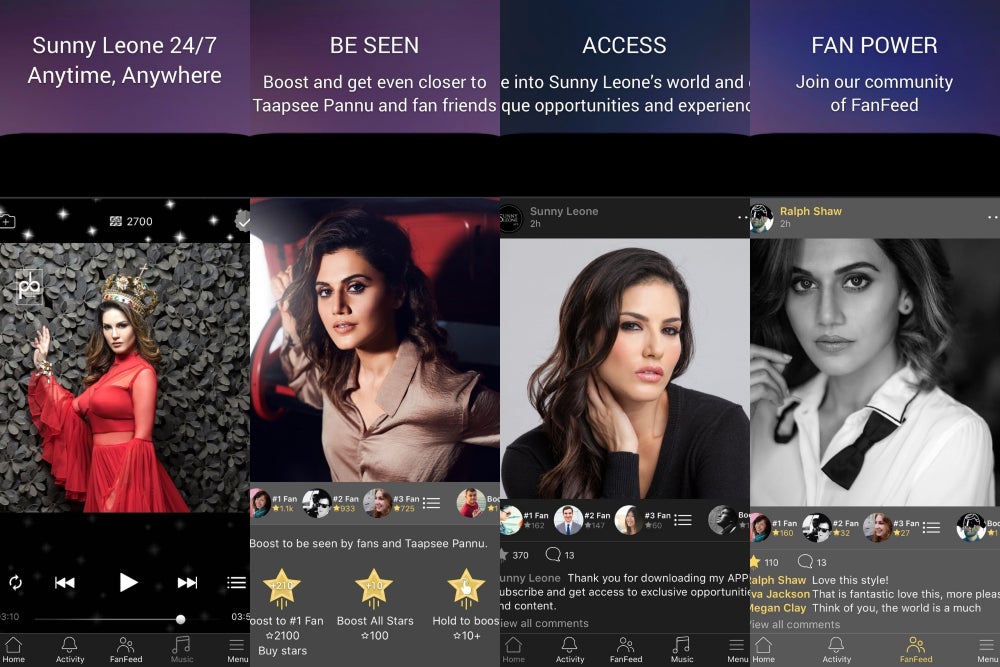 Internationally, Latin American artists such as Ricky Martin and Enrique Iglesias along with the family of late reggae star Bob Marley have been associated with the start-up for the creation of their customized, self-branded mobile apps.

Social media has turned quite "unsocial" over the years. "It is more like a broadcast medium for celebrities because it is not possible to read and reply to every single comment when there are 15k such remarks on your post," Talukder stated, adding that through their patented feature, EscapeX is solving the issue.

Talukder points out that on social media, there is no guarantee that a user would receive each and every post of their favourites because of certain algorithms restraining them to appear on your feed. EscapeX on the other hand integrates all major social network pages belonging to the artist into their app to allow the follower to stay updated with every single post made by the respective celebrity.

Moreover, the app allows the celebrities to watch what their followers are posting for them too. The users can post content on fan feed and boost its visibility using the digital currency they have earned on the platform. That's right, digital currency! The more frequently one visits the platform, the more currency he/she earns.

How does the Brand earn?

For the generation of revenue, the platform follows three paths – 1) In-app purchase, where the users purchase digital currency to rank themselves on the fan feed if they have not enough earned currency, 2) Subscription revenues that artist earns by locking certain content & 3) Sponsorship revenue that the celebs earn via supporting a brand or product. For all the mentioned profits, the artist gets the majority share and the developer earns the rest.

There is no cost to build, maintain and run the app. The platform also analyzes what is and what is not working for the artists while helping them with the content and marketing strategy. "We are continuously investing in content creation for our roster of celebrity platforms and full-service media and creative solutions to match our clients' needs." EscapeX is a market leader active in 17 countries including the US, Brazil, India and Indonesia.

EscapeX's foundation dwindles when the focus is shifted to the users instead of celebrities. Not every individual follows only one particular celebrity but rather has many favourites. Downloading a different application to personally engage with each of them would surely be a hassle.

To overcome the little block on the road, the company's product development team of 40 which operates from Taiwan has come up with a solution. "You only need to download a app and the rest of the apps are just sitting in the cloud," Talukder explained suggesting that many apps developed by the platform can reside on one app, saving the users time and space for downloading 10 different apps for varied celebrities.

Looking at the current statistics of EscapeX, the brand has over 200 apps live on Google's Play Store and Apple's App Store, all belonging to celebrities who have achieved certain individuality and are now looking to feed on their hard-earned popularity through their individual apps. Talukder suggests that on average, no individual followers download more than 1.4 applications developed by the firm.

He emphasizes that despite the platforms being merged, every celebrity would still enjoy the privilege of having a stand-alone app as the users would need to switch the apps for jumping to a different celebrity's POP.