Losing the Dream, but Saving the Store

The recession is driving mom-and-pop businesses to transform into franchises.

By Tracy Stapp Herold
July 16, 2010
This story appears in the August 2010 issue of Entrepreneur. Subscribe » 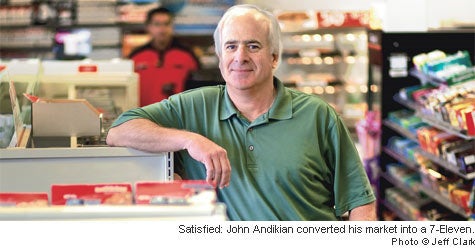 When John Andikian opened a convenience store in Tustin, Calif., he had big dreams. Dreams that had started 30 years earlier, when he talked with his father, a lifelong grocery worker, about someday owning a store together. "My father passed away before that opportunity came up, but I always remembered: When I get that store, it's going to be he and I together," Andikian says, "and I'm going to name it after him."

He got the chance in the summer of 2004. And true to his promise, he named the place Andy's Market and stocked it with just about everything customers might want--snacks and drinks, maps and lottery tickets, even his own version of a Slurpee, the Andy Freeze. The only problem was, customers were in short supply.

"I had visions when I first opened Andy's Market of competing with Wal-Mart," Andikian says with a laugh. "That dream ended after a couple weeks. Nobody knew what Andy's Market was."

After 18 months, his sales were too low to cover the rent and he was in danger of having to close. So when he learned of an opportunity to transform his little market into a brand-name convenience store, he jumped at the chance. For a $20,000 franchise fee and $100,000 in inventory and construction costs, 7-Eleventransformed Andy's into an instantly recognizable green, orange and red-striped Slurpee outpost.

The transformation took just 48 hours--with crews working around the clock. And Andikian says it paid off almost immediately.

There are more and more stories like Andikian's in the franchise world. Although conversion franchising has long been the practice in real estate, travel agencies and hotels, its popularity has increased in recent years in other industries, including auto shops, restaurants and business centers. Part of the reason, experts say, is the down economy.

"Independents who might have been satisfied at a certain level of performance find themselves no longer able to meet that level," says Mark Siebert, CEO of iFranchise Group, a franchise consulting firm in Homewood, Ill. In fragmented or contracting markets especially, he says, converting an independent store to a franchise can mean the difference between surviving--even thriving--and closing your doors for good. A number of franchisors that previously grew solely through startups has picked up on the trend and started offering programs to help independent owners join their systems.

7-Eleven started its Business Conversion Program in 2005 to offer owners of independent convenience stores--as well as liquor stores, delis and small grocery stores--the chance to become franchisees. The selling point, says Jeff Schenck, 7-Eleven's senior vice president of national franchise, is becoming "an iconic brand" with proprietary products, or what he calls "destination products." Think Slurpee, Big Gulp and Big Bite. That kind of brand power is appealing to independent operators, so it's no surprise that in the five years since the program started, 196 stores have been converted--and interest continues to grow.

The approach benefits franchisors, too. "It's a very efficient way to grow," Schenck says, "and a great way to add to your store count without adding stores to the market."

Re-branding an existing store costs far less than building one from the ground up--which means franchise fees and royalties are often less. And time-consuming zoning and licensing issues are usually already taken care of. So it's no wonder that 7-Eleven plans to continue to aggressively expand the Business Conversion Program. In fact, Schenck says, the company hopes conversions will make up about 60 percent of its total franchise growth in 2010.

The Matchmaker
Conversion franchising has become so successful that many franchisors are finding ways to make it work even for those who don't already own a business. Case in point: Allegra Network. The print shop franchise and its sign shop affiliate Signs Now have pioneered what they call the Matchmaker Program, which helps pair aspiring franchisees with existing print or sign shop owners looking to sell their business.

"You already have this established business, a business that's known in its market area," White says. "There's an established set of relationships there, and we're able to jump in and run this thing right away."

That doesn't mean it's a walk in the park, though. This acquisition-and-conversion strategy comes with its own challenges. Although new franchisees taking over the business won't struggle with losing their independence like original owners would, they also don't have the operational experience of the original owners.

"You have a person that's both learning your business and operating it at the same time," White says. "So the normal support structures aren't enough." For that reason, Allegra has support specialists dedicated to Matchmaker franchisees in their first year in business.

And unlike 7-Eleven, Allegra Network and Signs Now are business-to-business companies, which means that re-branding can prove to be detrimental rather advantageous.

"These are established businesses that already have customers," White says. "Those relationships are really important, and we can't afford to disrupt them by converting the brand."

Then there's the same obstacle that is hounding so many aspiring entrepreneurs in today's economy: limited access to capital. Getting financing for the purchase of an existing business is a little easier than getting it for a startup, White says--but not by much.

George Riesenfeld joined the Matchmaker Program in 2008, but his first deal fell through because he couldn't get financing. He didn't give up on the conversion program, though. "In today's economic climate," Riesenfeld says, "the risks are much too high to start from scratch."

His patience paid off. In January, he took over a Fort Worth, Texas, print shop that had $3.2 million in sales last year--making it the largest deal ever made through the Matchmaker Program. It's too soon to know how business will compare as a franchise. Still, Riesenfeld is so sold on the benefits of conversions, he's already looking for more shops to acquire.

The Tradeoff
Andikian's store may not be the market that he and his father envisioned all those years ago, but Andikian is no less involved in running it. If anything, he's even more hands-on now that it's a 7-Eleven, because the benefits of converting to a franchise didn't end at gaining a well-known brand name. 7-Eleven provided state-of-the-art equipment he could never have afforded as an independent, including a sophisticated inventory control system that even shows which brands of cigarettes aren't selling.

Although Andikian is still leasing the store, the company covers all maintenance and repairs. This means he can spend more time interacting with customers--and less in the back room worrying about how to make ends meet.

"You have free rein when you're an independent, but you are also responsible for all the bills, accounting, payroll--and that stuff just adds up," Andikian says. "Now my time is devoted towards more important things."

"There's a quantifiable value to what the franchisor brings," iFranchise Group's Siebert says. "So you measure that value against the cost." Of course, the decision to convert is never just that simple. "It's a very emotional decision to make," Siebert says. "Somebody is taking the name they've built over the years, or even that their parents built over the years, and changing it."

Andikian understands that all too well. "I loved being an independent," he says, "but the bottom line is the bottom line. In the first 12 months since converting, my gross sales increased $850,000." He was able to pay off the $120,000 cost of converting his store by mid-2009, about two and half years later.

And in the end, he did find a small way to keep a part of his and his father's dream: The owner of his 7-Eleven?

Wanted: Independents
Industries such as real estate, travel agencies and hotels have long focused on conversion franchising, and companies in other areas are beginning to see the benefits of this growth strategy. A few franchisors that have started conversion programs in recent years:

Allegra Network/ Signs Now
Allegra's Matchmaker Program pairs new franchisees with independent print shop and sign shop owners looking to sell their businesses. It also helps them calculate the value of the business and negotiate the sale, and once the sale is made, assists with upgrades and the conversion strategy.

7-Eleven
When independent store owners join 7-Eleven's Business Conversion Program, they continue to own or lease the site, but 7-Eleven installs proprietary equipment and assists with re-branding. 7-Eleven receives 25 percent of the store's gross profit after the first three months, leaving 75 percent for the owner. (It's a 50/50 split for startup locations that 7-Eleven builds from the ground up and owns.)

Steamatic
Conversion franchising has proven so popular with independent disaster recovery businesses that the majority of the franchises added to Steamatic's system in the last 10 years have been conversions. The franchisor sweetens the deal with reduced fees and royalties.

Checkers Drive-In Restaurants
Forty percent of this burger brand's growth in 2009 consisted of conversions of existing real estate--and not just restaurants. One new Checkers started out as a run-down car wash.

Gold's Gym
Since Gold's Gym started its conversion program in 2008, five independent fitness centers have joined the system. Converting franchisees agree to a 10-year term but have the option to terminate the franchise agreement on its third or fifth anniversary if they decide the brand isn't right for them.

Driven Brands ( Maaco and Meineke)
The car-care company's Advantage programs offer both a conversion program and a program to help new franchisees acquire and convert existing independent centers. Participants receive at least half off their licensing and training fees.

The company has also created the Jump Start program, which focuses on car dealerships that have been shut down. Licensing fees are half off, and there's no training fee. More than 20 dealerships have joined in the last 10 months, converting their service bays into either a Maaco or Meineke service center.

Honest-1 Auto Care
This auto repair franchise began offering a conversion program in 2009, with incentives including a reduced franchise fee ($15,000 instead of $25,000) and reduced royalty fees ranging from 2 percent to 4 percent for the first two years.

PostNet Neighborhood Business Centers
Since 2009, PostNet has targeted postal and business centers interested in converting. It waives the franchise fee and cuts royalty fees to 3 percent and 4 percent for the first two years. It offers financing for remodeling and free one-year advertising.