Phil and Sheila Harris saw Dream Dinners as an outlet for their philanthropic work. 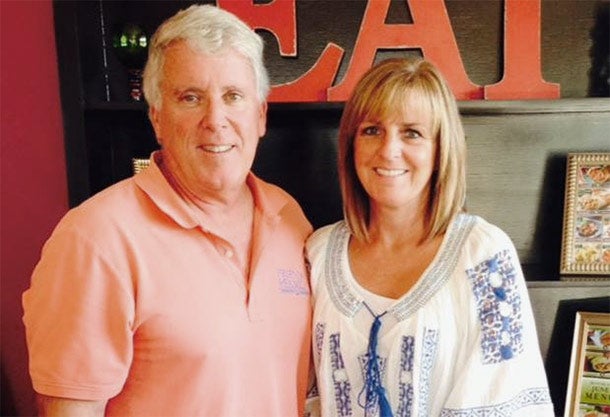 Phil and Sheila Harris wanted to own a business that would give them the opportunity to help out those in need, both in their local community and around the world. They found the perfect fit with Dream Dinners.

The husband-wife duo have found countless ways to use the food preparation franchise as a springboard for philanthropic efforts. They collect plastic grocery bags to create waterproof, recyclable mats to donate to the local homeless, and have hosted more than 65 food packing events to donate and package meals for local and international people in need. In the next year, they hope to host the largest food packing event in the world: an effort that would take place in a local stadium and last a full week.

Here's how the couple found a franchise that gave them the opportunity to give back.

Name: Sheila Harris (I co-own the location with my husband, Phil Harris)

We have owned the franchise for eight years.

We had never envisioned getting into franchising – it was just something that had never occurred to us. I was a customer at our local Dream Dinners and really fell in love with the concept. Shortly after, I began working there and eventually Phil and I bought that location. It was never about franchising, specifically, but more about the concept of Dream Dinners in general.

We wanted to own a business that would give us the opportunity to really give back to the community in the ways that we wanted to. Dream Dinners was the perfect solution for us because it allowed us to have an income that allowed us to give back, flexible hours and a lot of community involvement that is vital when giving back.

Phil was involved working in engineering and beginning his humanitarian work, which involved helping in low-income areas with families in need. I was at home raising our children.

We loved the Dream Dinners business model of family values, promoting the time around the dinner table and giving more time for quality moments. We also really liked that it is a controlled inventory, so you are not married to the business, but rather that you can plan your time investment.

The Dream Dinners franchise allows us opportunities to become close with those in our community who understand the importance of a good, balanced meal. These community members, in turn, are dedicated to helping out at our food packing events that benefit those who are in need of nutrition in our community, as well as around the world. At these events, community volunteers and contributors package and ship millions of meals all over the world, as well as provide for local families in need.

As for the recipes that are on the menu, those come from Dream Dinners corporate. However, this business is very customer-oriented in the sense that feedback is taken into account every time the menu is changed.

Related: How I Run a Restaurant Franchise With Virtually Zero Turnover

The learning curve was the biggest challenge for us – we were brand new to business ownership and it took some time getting into the swing of things. After a few months, though, everything started flowing pretty smoothly for us.

To have a vision that goes beyond the day to day work, something that you can be passionate about and proud of the difference you can make. Paying it forward is fulfilling. It motivates the employees and the customers to know they are part of something that makes an impact on people/families. I love every day that I come to work, going on eight years of this business, and enjoy it more than I did in the beginning. This is partially because the learning curve is not as great as it was in the beginning, but also because I get to see the difference we are making for the families that are coming here to make dinners, and the opportunities we have to give back to our community locally and globally.

I am looking into owning more locations in the future and we hope to continue our philanthropic efforts at those locations as well. I have noticed that as Dream Dinners continues to grow, so does their vision. Phil and I love that we get to be a part of such a forward-thinking company. As we have always believed, we are put on this earth to give back. If you are given much, you have much to give.

Related: How This Independent Thinker Realized Franchising Was the Right Fit for Her