These ads are bound to make you laugh -- or in some cases, shed a tear.

By Rose Leadem
December 13, 2016
Opinions expressed by Entrepreneur contributors are their own.

With clever storylines, impressive cinematography and amazing graphics, it's been a breakthrough year in advertising. As 2016 comes to a close, we've taken a look at some of the most interesting ads of the year.

In probably its funniest commercial since "Mac vs. PC," Apple's "The Kiss" featuring Game of Thrones star Nikolaj Coster-Waldau and Community's Alison Brie is bound to make you chuckle.

In the ad, things are not going well as the actors rehearse a kissing scene. Brie takes to Apple TV where she watches Coster-Waldau kissing Juliette Binoche in 1,000 Times Good Night to understand what she could be doing better.

Before she can flip to Game of Thrones, Coster-Waldau suggests a better idea to get Brie in the mood: asking Siri to open Apple Music and find songs by Jeremiah.

The actors comedically incorporate Apple TV features as they figure out how to execute a romantic wartime scene.

The video starts with a young man and woman painting designs in a 1960s studio and folds out over the decades. It shows how small achievements were truly unforgettable moments in their lives together: A game of badminton turns into a doubles match at Wimbledon, their first car was like competing in the Grand Prix race.

The video pushes the audience to realize the importance of life's minor details -- even in items such as beds, bookcases and desks.

IKEA also launched an end-of-year ad campaign, "Retail Therapy," that names products after most frequent Google searches about relationships, such as "He can't say he loves me" and "She doesn't want to cuddle. 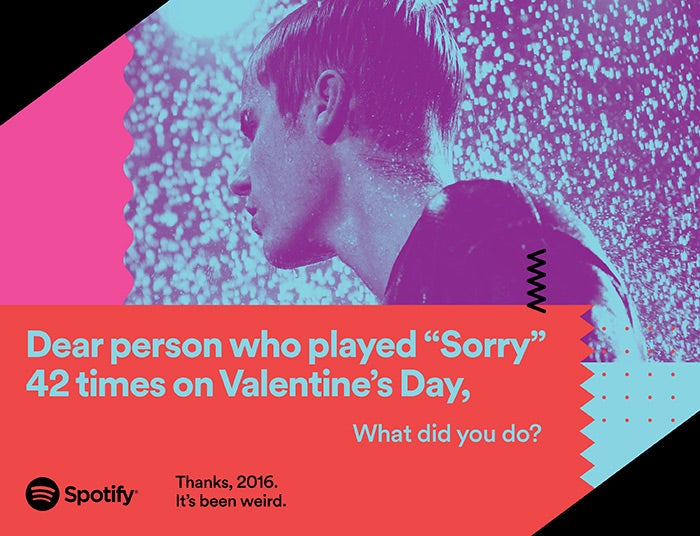 Spotify launched its global outdoor ad campaign, "Thanks 2016, it's been weird," a variety of data-driven ads, to 14 markets around the globe. Each hilarious spot contains a message specific to that area -- also picking on some of the wacky events that occurred in 2016.

An ad in New York City reads: "Dear person in the Theatre District who listened to the Hamilton soundtrack 5,376 times. Can you get us tickets?"

And just poking some fun: "Dear person who played "Sorry' 42 times on Valentine's Day. What did you do?"

Department store John Lewis got creative this holiday season with its "#BusterTheBoxer" video.

As a young girl falls asleep on Christmas Eve, her father goes out in the cold, winter's night to build her a trampoline as a surprise on Christmas morning. Little do they know, foxes, skunks and even squirrels come out to play on the trampoline.

While the animals have fun outside, the family dog Buster watches enviously from inside. The girl then discovers her surprise, but at the same time, Buster gets out and races to the trampoline.

"Can you hear me now?" We all know that line said by the Verizon guy in the company's older commercials. This year, in perhaps the most clever (and devilish) campaign yet, the Verizon guy, Paul Marcarelli, became the Sprint guy.

In the campaign "Paul Switched," the actor explains why he switched. I imagine there's also an element of revenge to his jumping ship.

In honor of his return to the Olympics, gold-medalist Michael Phelps stars in Under Armour's 2016 ad campaign "Rule Yourself." The video features Phelp training and preparing for his final swing at the Olympics, all to the song "The Last Goodbye" by The Kills.

Related: The Most Inspirational Moments From the 2016 Olympics

The video is powerful and motivating, ending with the note, "It's what you do in the dark that puts you in the light."

Old Spice's unbelievable "Rocket Car" ad campaign launched in January. The spot's star is legendary and hilarious -- in a self-deprecating sort of way.

In the ad, the man seems to have pushed himself too far -- having built a rocket without any engineering knowledge. "The most valuable lesson I have ever learned is that if you fill your brains with knowledge, then there won't be any room for dreams," he says in the video as his rocket slowly falls apart and eventually catches fire.

This ad is so stupid, it's funny. Geico's "Forest" spot features two men in the outdoors, sawing a tree when a massive grizzly bear suddenly approaches them.

Plot twist: Before what could be a vicious attack, one of the men recognizes a birthmark on the grizzly, realizing it's his long-lost brother. Cue the music -- "He Ain't Heavy He's My Brother" comes on as the bear and man embrace.

Promoting its Wild Rabbit products, Hennessy's "The Piccards" commercial tells the stories of physicist Auguste Piccard's adventure to the stratosphere, and his son Jacques's accomplishment of reaching the deepest part of the ocean.

Told through visuals, the commercial is dominated by unbelievable graphics and cinematography. It isn't until the very end that the company tells you what you are watching, with copy on the screen telling of the father and son's accomplishments. The video ends with the question: "What's your wild rabbit?"

The video above is taken from a third party YouTube account and could be removed at any time.

Adidas's "Your Future Is Not Mine" is sure to give you goose bumps. The video depicts life from different cultural perspectives. It puts you in the shoes (or should I say, Adidas) of others as they walk through different scenarios set in the future.

The film demonstrates how everyone's lives are different, and includes gadgets such as virtual reality headsets and robotic women taking selfies of themselves.

Forget about raining cats and dogs. GE's ad campaign "Raining Octopuses" literally features octopuses falling from a stormy sky. The catastrophe causes accidents and general chaos around the city -- but GE is ready to help, demonstrating to the audience that the company is prepared for "whatever the world throws at us" -- literally.

Wes Anderson, director of favorites such as Life Aquatic With Steve Zissou and The Royal Tenenbaums, helms H&M's holiday ad campaign with the video "Come Together" starring Adrien Brody.

The video is very Anderson-esque, which makes it all the more appealing. As the train conductor, played by Brody, announces unfortunate news to passengers of an extra 11 hours due to bad weather, the people aboard come together to celebrate Christmas, rather than dwell on the fact that they have to spend the holiday on a train.

Lyft's end-of-year campaign "Ride on the Bright Side" takes a stab at competitors like Uber. In the video, three sinister corporate men from "Ride Corp" and "definitely not Uber" try to plot against the ride-sharing startup.

In one video, an executive asks, "Why are all the Lyft drivers so happy?" Another replies, "Maybe it's because Lyft lets passengers tip them in the app." Oh, snap.