It's no joke. Jennifer Gault-Varner builds turnkey websites for sale, then teaches you how to make them a success. 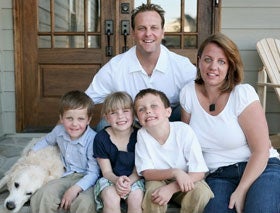 Jennifer Gault-Varner prefers time with her family to running a mega business.

Jennifer Gault-Varner creates turnkey online retail stores stocked with merchandise, sells them to brand-new entrepreneurs--and provides 40 hours worth of consulting to help the newbies on their way to success.

Gault-Varner, founder of Pure-eCommerce.com, says she would still own her first business, BellaBluMaternity.com, if she'd had the kind of assistance she now offers to her clients.

Bella Blu Maternity was the quintessential overnight success. It brought in $7,000 in sales its first month and $100,000 by the end of the first year. Sales topped $1.5 million by the second year, but the economics weren't working out.

PPC turned out to be Gault-Varner's downfall. "Pay-per-click was the vehicle that grew my company very fast, but it was also the same vehicle that almost made me lose my company."

The problem, she says: "I didn't have a clear idea of how pay-per-click campaigns work." She didn't realize how much she was paying to bring a customer into her store. "I didn't understand how to figure out the statistics. And I didn't have time to look into that because I grew so fast."

She sold Bella Blu, then went back online and created a pajama store. It took only a couple of weeks for her to realize that she was tired of retail sales. She sold the site, Pure Pajamas, to Melinda Felton, a stay-at-home mom who had never run an e-commerce site before.

"She needed a lot of help," Garner-Vault says. "That's when I developed this very methodical, step-by-step [consulting] process. I knew the steps we needed to go through to get her up and running the quickest. So she had this foundation of a great-looking site, a great domain name, great products and somebody to mentor her through the process."

That's when the light bulb turned on. "That's brilliant," Gault-Varner thought to herself. "That's what everyone needs who's going to go online and has never owned an e-commerce site before."

Says Gault-Varner: "Your barrier of entry to get online is so easy. It's easy to acquire vendors, design a site and pop it up. But the actual running of an e-commerce store is quite difficult. And if you don't educate yourself as to what needs to be done--and go do it--you'll fail."

Gault-Varner says the intent of her 14-step consulting process is to touch every area an entrepreneur has to know about to run a successful online business. "If you don't know these areas, you'll make the same mistakes that I made and that so many others make--and that tend to result in you going out of business."

So how does Pure eCommerce work? The company creates businesses in a range of industries, including baby, children, pets, home décor, furniture and eco-friendly organic products. "I come up with a great domain name, design the site, establish relationships with vendors and load up all the products." When the site is purchased, the consulting process begins. Clients also have the option of coming to Pure eCommerce with their own idea or concept. "We'll build them a turnkey business based on what they need," she says.

Gault-Varner says it typically takes about a year for people to get a site up and running on their own. It takes Pure eCommerce about three months to build a site.

She has about 15 to 20 sites available for sale at a time, ranging in price from $4,000 to $10,000. Each has a project manager who is responsible for building the site, establishing vendor relationships and loading the products. If the site doesn't sell immediately, Pure eCommerce will run the site until it's sold.

It's a self-limiting business. Gault-Varner can only take on a certain number of clients at a time. "As great of a concept as it is, it's a very time-consuming concept if you're going to provide very personal and valuable service to the client. You can't have 20 clients at one time."

But Gault-Varner isn't after a mega business. She appreciates being able to be home with her three children (a fourth is on the way), live a comfortable lifestyle and help other women start their own businesses--all while doing something she loves.

Gault-Varner says that success requires a lot of hard work and an inability to accept anything but success. "It's not a get-rich-quick scheme," she tells clients. "If you're not willing to work your behind off, you shouldn't be an entrepreneur.

"So many people go online, think they're going to pop up a site, sit back and the money rolls in. And that is a mistake."

Her advice to would-be entrepreneurs: