Started in 2016 as a $500 side hustle by two English women, the ethically sourced company is expected to hit $10 million in sales by inspiring people with kindness.

Claire Cooper and Charlotte Van Dyke weren't exactly looking for side hustles when they met through mutual friends at a Los Angeles café one sunny afternoon in 2016.

A Yorkshire, England-born actress, Cooper was working steadily in television, recently appearing in mega-producer Shonda Rhimes' Still Star-Crossed, History's Knightfall, and 12 Monkeys, the Syfy series based on the 1995 Brad Pitt movie. She was also slated to leave for London to star as Anne Boleyn, the second wife of Henry VIII, in a BBC documentary miniseries.

Van Dyke — also from Yorkshire — was a forensic neuroscience graduate with a successful modeling career. After working for brands like Banana Republic, appearing in Vogue, and walking Fashion Week runways around the world, she moved to California in 2014 to run operations for the investor and social media personality Tai Lopez.

But as they chatted over green tea and vegan cakes, both felt the serendipity strike. Cooper mentioned her dream of starting an ethically sourced clothing line that was fused with positivity and love, while Van Dyke was immersed in learning internet marketing and running online companies.

"I knew we could create something fabulous with our combined vision and know-how," says Cooper. "What I didn't realize was that I was also discovering a dear friend." Struck by divine inspiration, she blurted out three words at the meeting that would become the company name.

Several days later, they met again with friends at Malibu Wines, and the conversation immediately reignited. After hours of animated discussion, 10 pages of scribbled notes and a cobbled-together $500 budget, the inspiring luxury loungewear line Om & Ah was born: "Om" meaning the essence of reality in Hinduism, and "Ah" being the moment of clarity. 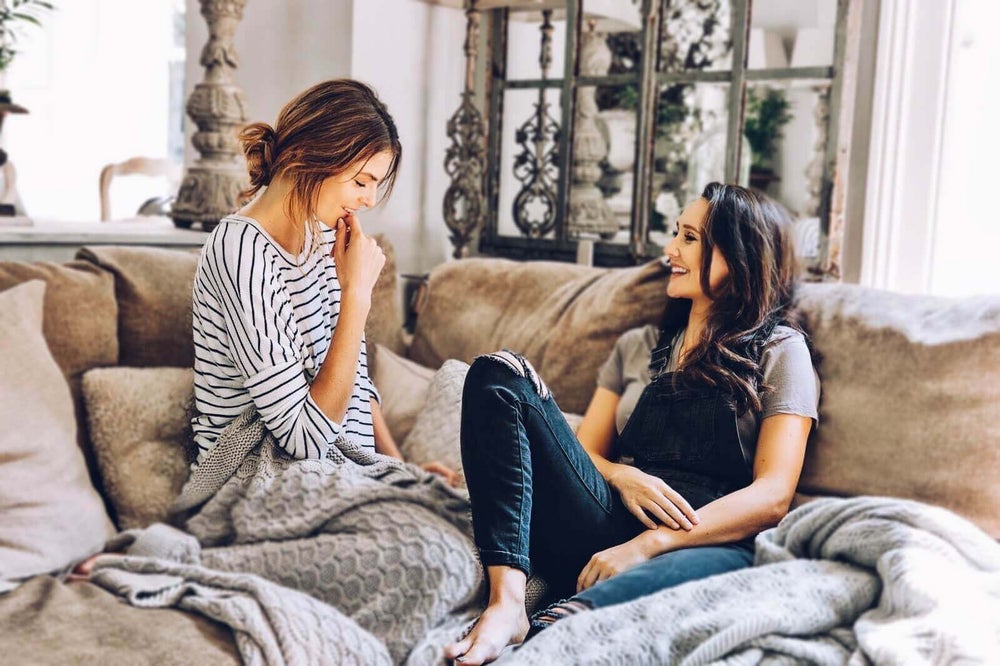 Several weeks later, the pair called in favors from two models and a photographer friend for their first launch of hoodies and tank tops, emblazoned with inspiring sayings that encourage virtues like compassion, gratitude and unapologetic self-love.

"We wanted to share intelligent, inspired clothing that people felt connected to and proud to wear," says Van Dyke. The duo unveiled a website and spread the word on Facebook and Instagram. After a nerve-racking week, Om & Ah's first sale registered. "We were thrilled — until we woke up the next morning to an email asking for a refund because it was a drunken purchase," says Cooper, laughing. 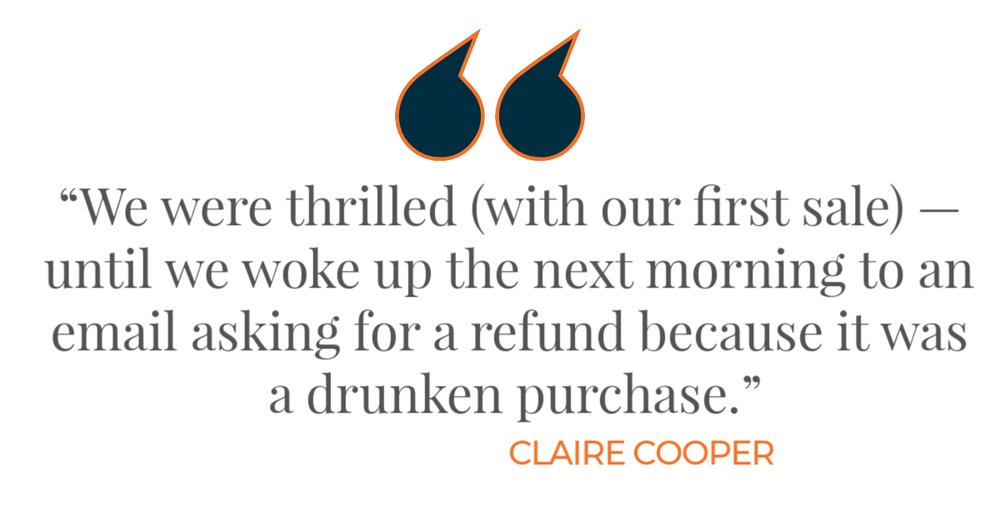 The emotional roller coaster continued for 12 months because they just couldn't get their numbers right. Cost of goods was too high, while ad spend and other marketing expenses weren't being managed or targeted efficiently. They also didn't run the deep math on taxes, refunds, exchanges, shipping, lost packages and payment processor fees.

Looking back, Van Dyke advises an entrepreneur in the same situation to run the math first with a finance expert. "Hawk-eye everything; hidden fees add up," she cautions. "When running ads, know your CPA [cost per acquisition] and CLTV [customer lifetime value]. We now have a formula that tells us every daily figure we need, from gross sales and ad spend to staffing cost and net in the bank."

Cooper taught herself Photoshop and design, while Van Dyke learned to code and build a website — all from an endless stream of YouTube videos. They tested different styles, determining what worked and what didn't. "We pushed ourselves to the absolute limit; some moments were soul-destroying and in the next, exhilarating," recalls Cooper.

As they devoted 16-hour days to their startup and began raking in hundreds of thousands in sales, neither woman drew a paycheck. Every dime went back into the business. They ran a lean operation, keeping most work in-house and relying on what Cooper jokingly calls "good old Yorkshire graft" — British slang for "hustle."

"It was a constant cycle of making sales and reinvesting in new photo shoots, products and marketing specialists, running test after test to discover what worked and didn't," says Van Dyke. "Luckily we're smart with money and had savings, so could concentrate on building the business instead of worrying about making rent."

"It was tough," admits Cooper. "I had to learn a tremendous amount and jump-start the left side of my brain, while the pressure of not making money was frustrating."

Van Dyke also remembers feeling terrified about leaving an incredible wage and learning opportunity. "People beg Tai Lopez to hire them — even offering to work for free — and there I was handing in my notice," she laughs. "Because Tai has such an incredible team and network, I feared that despite all I had learned, I wouldn't be able to make things work alone. Leaving that job was one of the hardest things I've ever done. But I felt young and free enough to take that risk."

The co-founders took the plunge because they recognized "a calling" for the business. "I saw people reposting poetry and quotes on social media and knew this was something people wanted," explains Van Dyke. "We see so much fakeness on social media and sadness politically and environmentally that we wanted to reintroduce some love and positivity into people's lives."

That shared vision and a deep values alignment allowed the pair to persevere through the steep entrepreneurial learning curve, helping them to redefine the brand and further sculpt its inspirational but down-to-earth voice.

"The initial sales proved that people around the world loved the brand; we just needed to recoup some of the back end. We stuck to our guns, remained strong, and supported each other because we knew the graft would ultimately pay off and our message of inspiration would transcend," says Cooper.

And pay off it did. Van Dyke explains that the game completely changed when they hired a data analyst to review and tweak their advertising. "We began selling much higher volume while spending less, and with that volume came lower cost of goods. We finally got our numbers right." Successful advertising allowed Om & Ah to reach millions of women around the globe, who immediately connected with the brand's ethos and commitment to using ethically sourced clothing with as little environmental impact as possible. All of Om & Ah's suppliers and manufacturers practice fair trade and fair wage only.

From its first to second year, sales increased tenfold. By 2019, the company really took off and is expected to hit $10 million in revenue this year. "I often wondered how we managed to rise up and stand out among competitors," admits Van Dyke. "Then one of our wholesale reps summed it up: It's because the brand is meaningful and intelligent for our audience. A brand needs to make you stop and feel something." 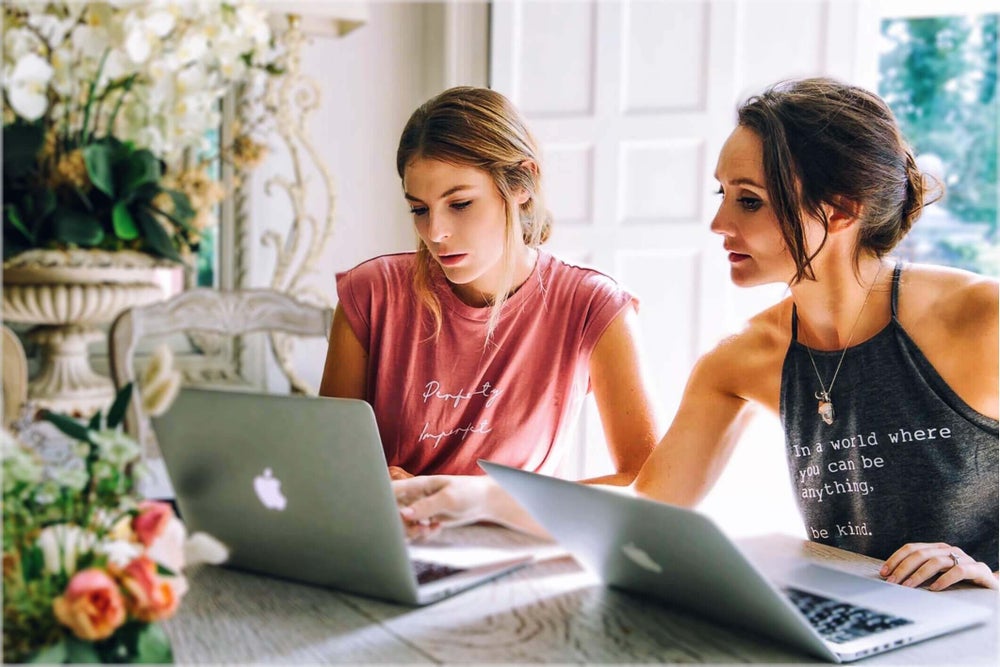 They also have big plans. Om & Ah just released a monthly subscription box in the U.S., which they're rolling out worldwide in the coming months. They plan to expand into activewear, children's apparel and custom-made skincare.

Going Wherever the Wind and Wi-Fi Take Them

Even as Om & Ah's growth proliferates, the co-founders remain hands-on with a small team of highly qualified people, only hiring the best when the need to outsource arises. Cooper oversees the creative while Van Dyke handles operations. They write all their email newsletters, which are filled with recipes and tips for adding zen to your life, without any hard sell.

"No matter our level of success, a homegrown feel must come through our brand. It can't be stuffy corporate; we are a friendly, approachable company and want our customer to still hear and feel our personalities," says Cooper.

They also make time to sit with cups of tea (with vegan cake!) and relish customer notes about how Om & Ah gear provided comfort and inspiration during hard times, or how people in their community have connected. "One of my fave messages was from a customer traveling along in the airport, who ran into someone wearing the same "Heart of a Hippie' top. They hung out together and became friends!" says Van Dyke, beaming. 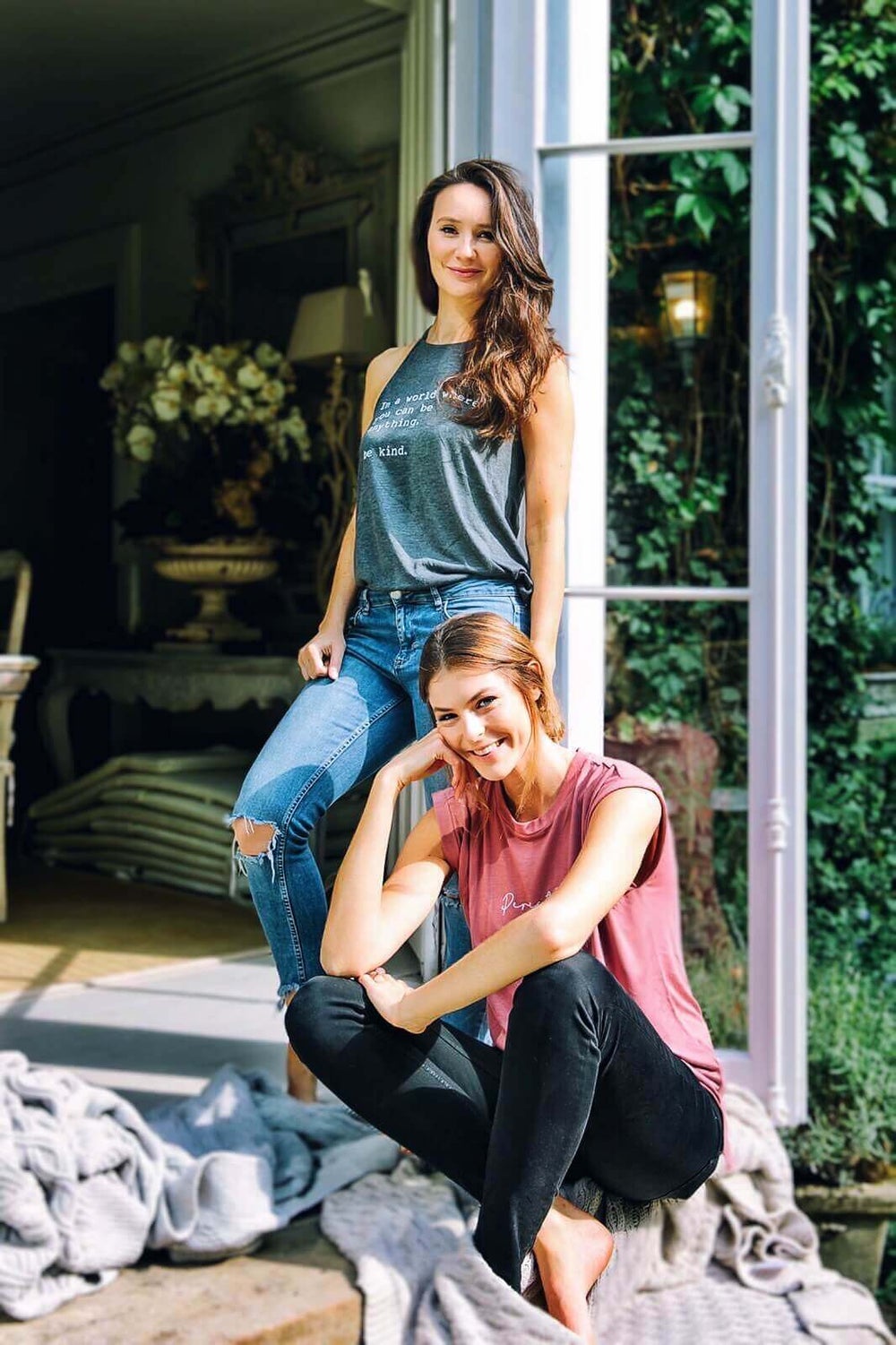 Despite their success, a homegrown, friendly, approachable feel must come through the Om & Ah brand, say the co-founders, wearing their best-selling slogans.
Image Credit: Alice Wint

"I'm often overwhelmed by the company's impact and the connections the "Om family' has forged," says Cooper. "We've nurtured this baby from the embryo stage with all our heart, soul and knowledge … it's been magical."

Their success has also allowed Cooper and Van Dyke to travel widely, embrace their love of nature and share their adventures with customers. Van Dyke has gone full digital nomad, traveling with her husband, Jeremy, all over the world. They most recently toured Africa, where they did a four-day safari through the Serengeti on horseback (and were almost charged by a giant male rhinoceros!). They're currently in Bali, and tend to go wherever else the wind — and Wi-Fi — take them.

Cooper also relishes traveling, most recently on a South African safari with her husband, Emmett. She dreams of visiting Uganda or Rwanda for a gorilla trek, but is also content to work from home in Northern England with her flat-faced cats by her side and vegan recipes simmering on the stove.

Above all, the Om & Ah founders remain committed to their mission of spreading joy, kindness and self-love. Their two bestselling messages are "In a world where you can be anything, be kind," and "Perfectly Imperfect," says Cooper. "That sums up our company."