January 24, 2019
Opinions expressed by Entrepreneur contributors are their own.

Mike Peters will never forget the day his mother-in-law came to visit his family in Florida. She wanted to bathe his young daughter, but the water wouldn't turn on. Embarrassed, Peters pretended he didn't know why. The reality was he didn't have the money to pay the utility bill.

"How did I get here?" the 30-year-old wondered. As a teenager, he'd been a rising tech star. He developed and sold his first software at age 13. At 16, he turned down a job offer from Microsoft. By 23, he'd saved $1 million.

But his dot-com startup, a messaging platform, burned through that cash along with $6.5 million Peters had raised from investors. In three years, his company failed to make a single sale.

Fast forward to today and Peters has bounced back and made enough money to last a lifetime. He's the founder of the Yomali Group, an international e-commerce solutions conglomerate with over $1 billion in revenue. "My body is covered with scar tissue from the mistakes I've made along the way," says Peters as he reflects on the ups and downs. "I made almost every mistake in the book."

In high demand during the dot-com days.

Peters grew up in a middle-class family in Hod HaSharon, a small city near Tel Aviv, Israel. His computer obsession started early, and at age 10 he got his first, an Atari 800XL. He taught himself to code and created an accounting spreadsheet tool before Excel existed. He sold it to a neighbor for $500 — a lot of money to a 13-year-old. 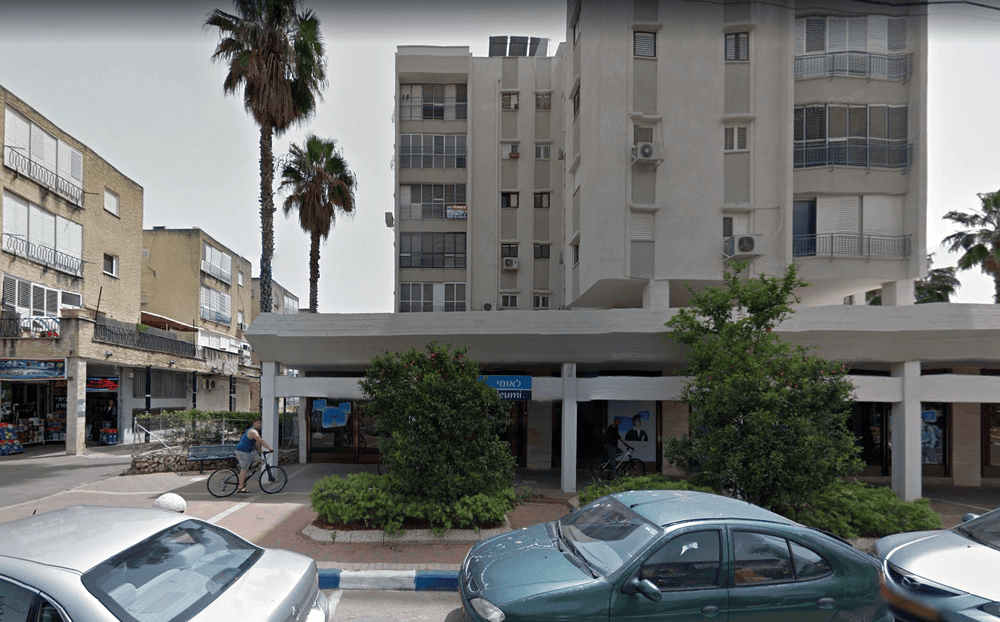 At 14, Peters enrolled in the computer science program at the Open University of Israel. He convinced his parents to let him drop out of high school to complete his studies and work in the field. In 1991, he hosted one of Israel's first bulletin board systems (BBS), an early iteration of today's websites on which visitors played games and exchanged messages.

A Microsoft recruiter discovered the talented teen and offered him a job. The company wanted him to permanently relocate to the United States, but Peters was only 16, and he turned down the offer.

Instead, he accepted an Israeli-based gig developing software, which ironically brought him to the U.S. for six months. "I was 17, making bank doing what I loved in Laguna Beach, California. It was everything I'd dreamed of."

Forced by the military to postpone his dream.

A week before his 18th birthday, Peters flew home to fulfill his duty as an Israeli citizen and join the military. "My friends didn't understand how I could leave my comfortable lifestyle to lie in ditches and fire guns," he says. "I had no choice. It was the right thing to do."

In the artillery forces, Peters wouldn't touch a computer for three years. "I had to put my life on hold for my country," he says. "That's when I learned life doesn't always go your way." 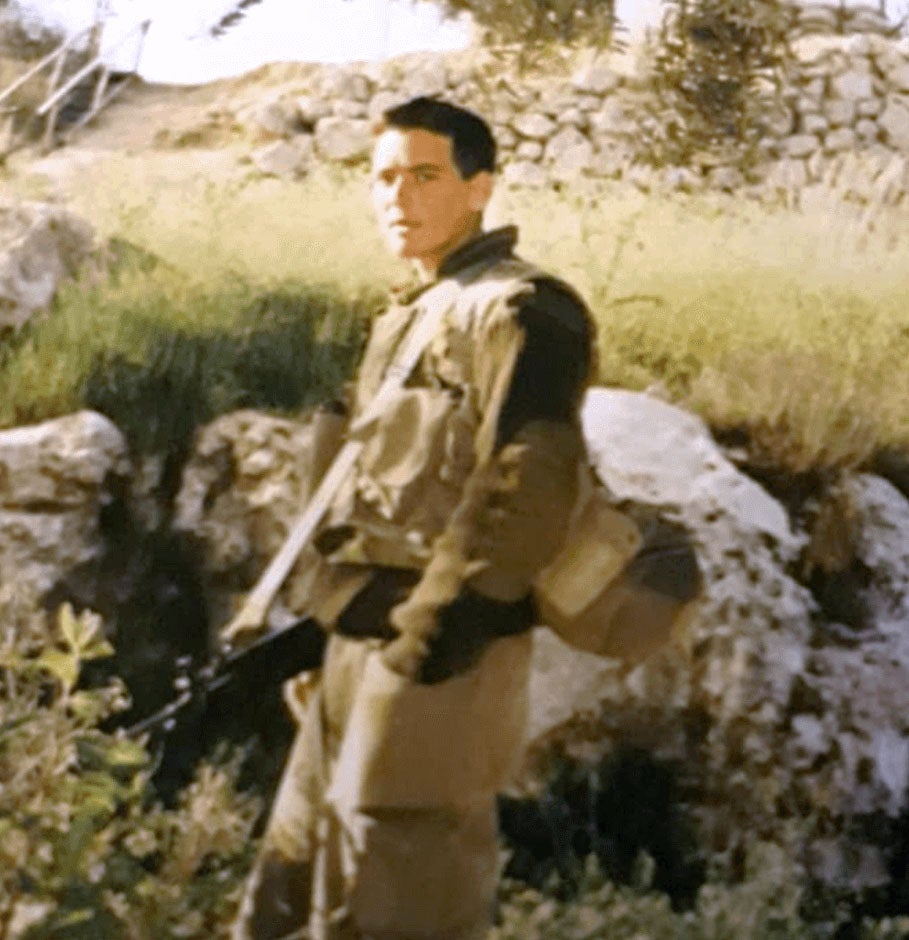 "I hated almost every minute of the army," says Peters. "But in retrospect, those three years made me who I am today. I developed perspective and perseverance, and learned the importance of having the right mindset."

Every four months Peters rotated between the border surrounded by enemies, Gaza, where he had a few close calls, and training. "The military teaches you to always be a student," says Peters. "Most people think they've learned everything after university. They end up working for those who never stop learning. Formal education eventually ends, but self-education never stops. The more you learn, the more you earn." 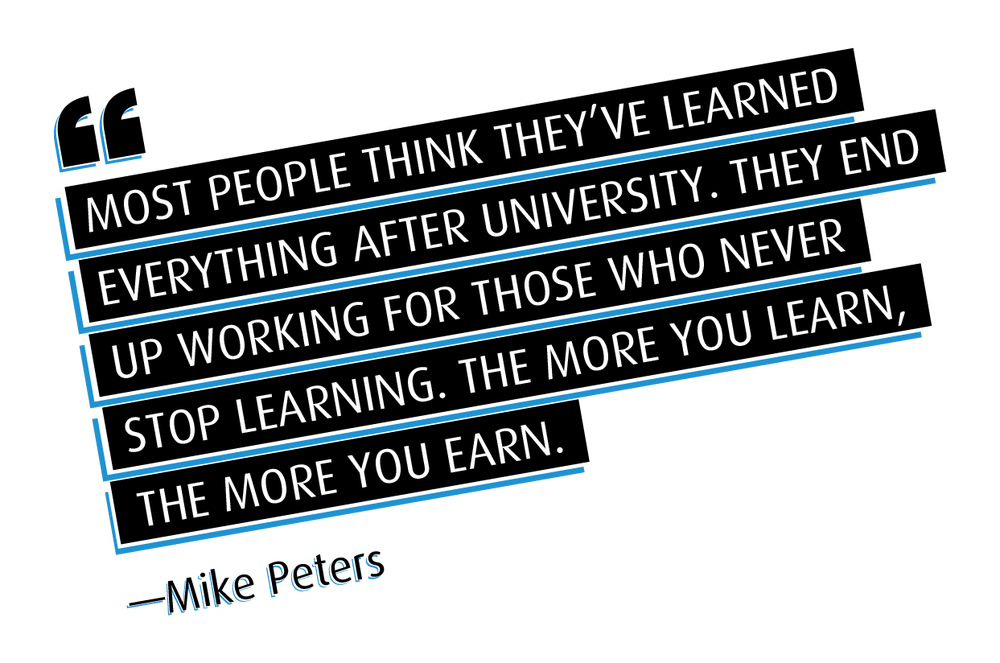 Finding love — and losing $6.5 million along the way.

Peters fulfilled his commitment to the military at 21, then spent the next two years at a cybersecurity company while selling software on the side. He'd been saving since he started working at 16, and reached $1 million by age 23. Peters decided to launch his own startup, a customer messaging platform.

That's how he met his wife, Orit (pronounced Oh-reet) Tenenbaum. His company's recruiter recommended her as a quality assurance manager, even though she was a 21-year-old fresh out of training. Peters gave her a shot, and she excelled. When they started dating, they kept their relationship secret, which wasn't easy — especially when Peters moved to Silicon Valley for the company.

It was 1998, the peak of the dot-com era. Peters' startup had raised $6.5 million from big-name investors. "At the time, the tech industry was all about eyeballs and downloads — and figuring out revenue later," says Peters.

His company was no different. Three years later, the $6.5 million was gone. They'd spent it all building the business without making a single sale. Peters had also spent most of the $1 million he'd saved. 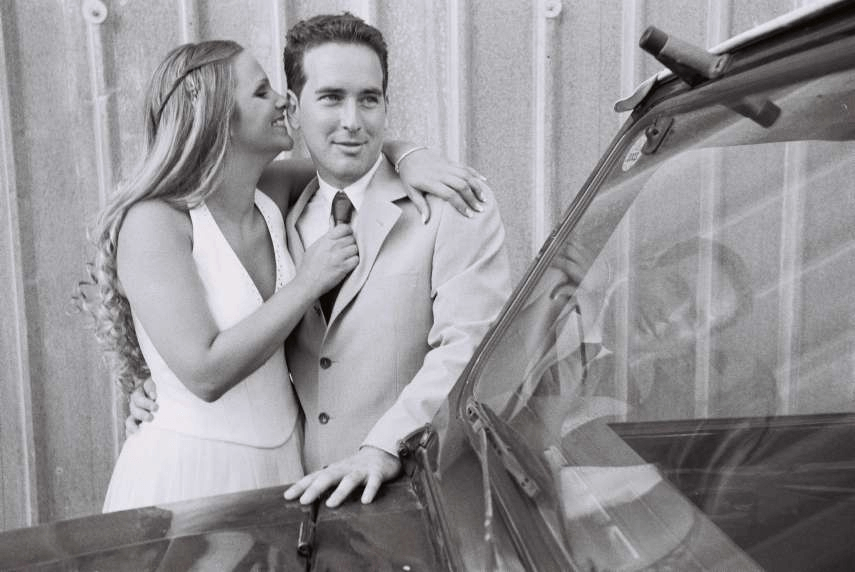 After the startup shut down, Peters returned to Israel to marry Orit. The newlyweds decided to start over in the U.S. "My father-in-law was concerned about what would happen if I failed again. I told him I would just keep trying," says Peters.

"I don't know a single entrepreneur who failed 10 times in a row. That rarely happens. The problem is that most people quit after the second or third failure. I knew if I kept trying, eventually I'd succeed." 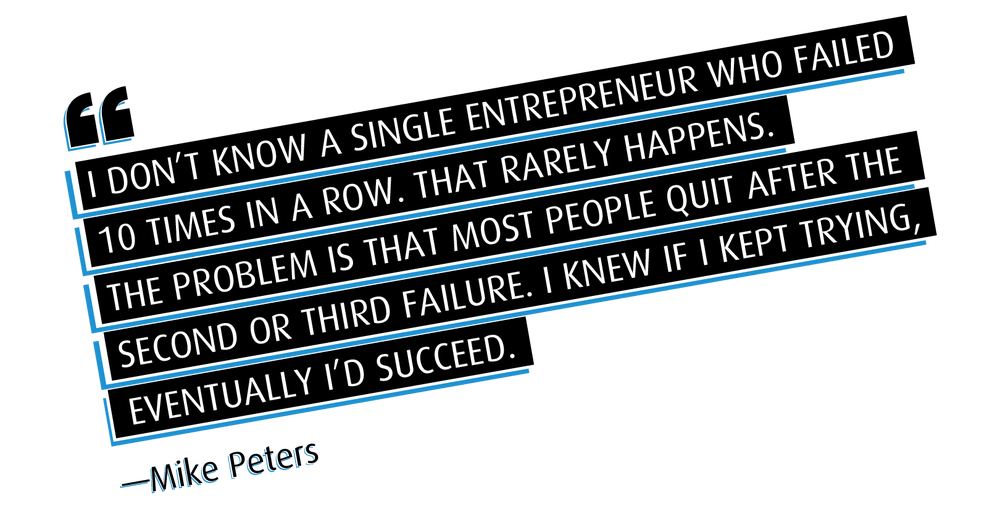 From broke to really broke.

At 27, Peters moved to New York City with his new wife and their remaining savings: $5,000. They rented a tiny studio in Times Square for $2,000 per month. "That was a lot of our money, but I wanted to force myself to figure things out," says Peters. "To be successful you have to burn your boats, leaving no option of going back."

For the next few years Peters worked 15 hours a day, seven days a week. Despite his software development experience, he settled for website development projects because he didn't want to go back to investors. 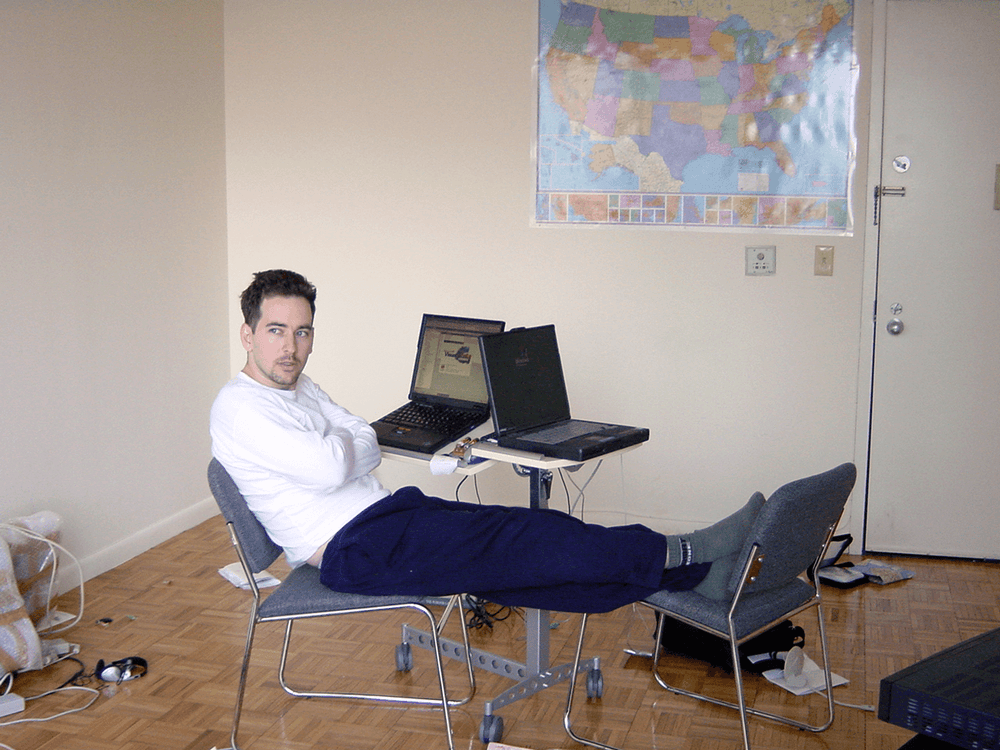 After their son was born in 2003, the couple moved to Florida, where they had their second child, a daughter. They had no family, friends, or support there. "I could've made more at McDonald's for the hours I was slaving away," says Peters. "I had to look my wife in the eyes and tell her it was going to work out — even though I didn't know how. Web development wasn't my passion, but it was a way to keep the lights on until I found my passion."

Except he couldn't keep the lights on.

Shortly after their water was cut off, their car was repossessed and their house foreclosed on. "I couldn't support my family, and my marriage was on the brink of collapse. Orit took the kids back to Israel, while I stayed in Florida to figure things out."

His wife and children wouldn't return for a year. "I questioned myself so much during that time," he reflects. "I experienced imposter complex, and started thinking it was just luck that made me successful when I was younger. I spent long nights feeling like a loser who couldn't support his family.

"Nobody talks about the hard times," says Peters. "But every entrepreneur experiences them. Not just bad sales — I'm talking about broken marriages, losing everything. It takes the right mindset, perseverance, and passion to overcome the challenges. But with that, you'll be unstoppable." 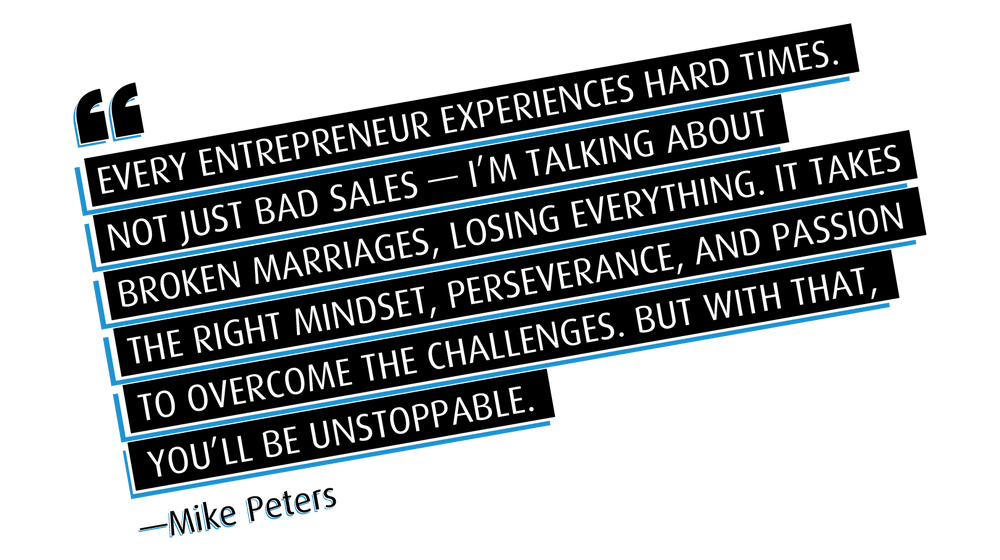 "I owe everything to my supportive parents and the army, which taught me to get back up every time I fell down."

Scaling a business with clients' money.

When Peters began hiring freelancers to help with coding, things slowly started to improve. Four years later, hundreds worked for him. He began building different software, using clients' money as financing to develop a new business model. His employees wrote all their code in a generic way so they could reuse it to create their own versions of the platforms they built for clients.

Peters transitioned to selling that software as a service. "Selling your time has a low ceiling. To double revenues, I had to double the workforce. So instead, we started selling subscriptions." The bottom line increased significantly.

He later pivoted again, this time as an online retailer. "Our clients sold products online, and many of them outsourced the majority of the work to us," says Peters. "We were making five figures while they made six." The bottom line exploded again.

At this point, Peters had many services under one business. "Every business needs focus. You can't be everything to everyone. We hit a ceiling trying to do everything under one name." Peters spun out into eight stand-alone businesses under one umbrella, the Yomali Group.

The three steps to business success.

"I've over-promised and failed to deliver, made bad hires, and failed to see the big picture," says Peters. "A partner stole $1 million from me and an employee created a competing company using our code. It's my mission to share what I learned from those experiences — so others don't have to learn the hard way." 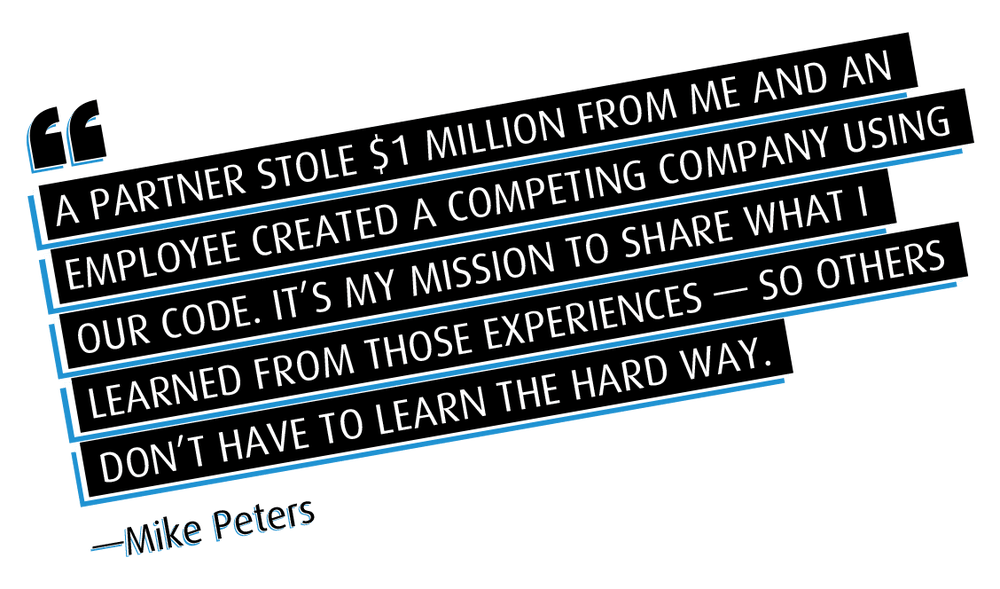 Peters says there are three levels to business success. "The first is hard work and putting in the hours. You need to love what you do to sustain it." He says you can build a $1 million business if you pour 10,000 hours into it. "If you spend seven hours a day mastering your craft, that will take you four years. But if you dedicate 14 hours a day, you'll get there in half the time."

Second, Peters says mindset differentiates a $1 million business from a $10 million one. "You need grit, to believe that nothing is impossible. Do whatever it takes and don't take no for an answer."

To exceed $100 million takes leverage, such as using distribution partners and affiliates, monopolizing a small niche, and using others' time and money like Peters did.

Peters has made it his mission to share what he's learned and help others avoid his mistakes.
Image credit: Courtesy Mike Peters

Their third child was born in 2011. Now that he's made all the money he'll ever need, Peters divides his time between family, business, and helping others.

"No amount of money beats knowing you impacted others," he says. In January 2019, Peters was invited to join the board of the XPRIZE Foundation, which is dedicated to solving big world problems. The elite group includes filmmaking legend James Cameron, publishing icon Arianna Huffington, and Google co-founder Larry Page. 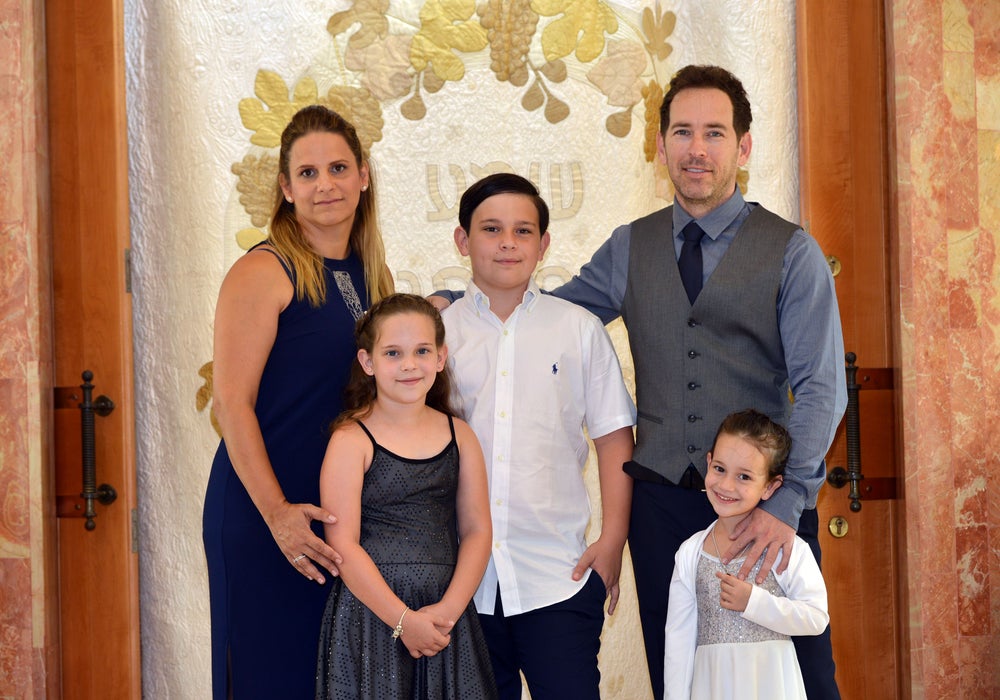 Despite all of his successes, Peters has found the most happiness helping others. "My legacy is my driving force. I want to leave this planet better than when I came into it," he says. "Empowering entrepreneurs to do great things creates a chain reaction that benefits many. That's why I devote my time to building tools and services for them — it makes all the scar tissue worth it."

Connect with Mike Peters on LinkedIn or learn more about his company here.