A Roundup of Rivals in the Cupcake Craze 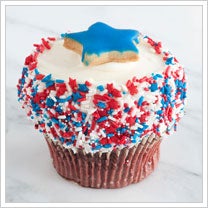 In the latest layer of the cupcake craze, New York-based Crumbs Bake Shop started trading shares on Nasdaq today. Shares opened at $13.10, giving the cupcake chain a market value of $58.9 million, according to Reuters.

There has been no shortage of gourmet competition in cupcakeries, with many small business owners attempting to put their own inventive -- and often quirky -- spin on the sweet treats. To be sure, the business is far from all sweetness and light. There's even a Food Network reality show called Cupcake Wars, which is in its third season.

Here's how Crumbs stacks up against some of New York's leading cupcakeries.

To indulge your sweet tooth even more, a look at our recent coverage of some of Crumb's most inventive rivals:

How do you think Crumbs public trading will affect other entrepreneurs in the cupcake business? Share your comments.

Corrections & Amplifications: An earlier version of this post misstated Magnolia Bakery's plans to expand in New Jersey and Boston. The company has no immediate plans for those cities, rather it expects to open in Chicago and the flagship Bloomingdale's store in New York this summer.