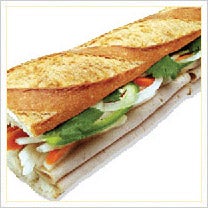 The Le family of San Jose, Calif., parlayed a catering business into one ofthe most successful Asian food franchises in the Southwest. There are35 Lee's locations, mostly in California, with a few scattered inTexas, Arizona and Oklahoma.

The staple of Lee's sandwiches is "banh mi" -- Vietnamese sandwicheswith French flair. The first thing you'll notice at a full-serviceLee's is the smell of racks upon racks of freshly baked baguettes. Thefranchise's signature sandwiches are simple stacks of meat -- oftenpork or pate -- onions, cilantro and jalapeno served between chewyslices of near foot-long baguettes. The flavor is solid if not a littleexotic for burger eaters, but the hook is price: $2.45. Theestablishments also serve more Western-style sandwiches on baguettesand croissants that feature mayonnaise, cheese, lettuce and tomatoes.Egg rolls and spring rolls are optional, as are Asian-style sweets,including a new item, Korean cream puffs called delimanjoo. There's a clean, assembly-line quality to the eateries, which arearranged around a walk-up register and a pick-up counter. An automatedvoice calls out customers' orders by number when the food is ready. Andthat's usually within a few minutes. Most of the establishments seem tobe cash only. All feature free wi-fi. Franchise fees start at $248,180for a "mall unit" and top out at more than $2 million for a "productionunit" where bread is baked onsite. More info can be found here.