How I Survived 'Shark Tank'

By Carol Tice
April 25, 2011
Opinions expressed by Entrepreneur contributors are their own. 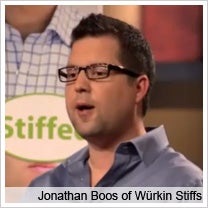 On Friday nights, legions of entrepreneurs are no doubt glued to the reality-TV show Shark Tank, in which business owners pitch a heavyweight group of celebrity venture capitalists including billionaire Mark Cuban, real-estate mogul Barbara Corcoran and apparel empire-builder Daymond John of FUBU Clothing. I got to debrief one entrepreneur who swam with the 'Sharks' recently -- Jonathan Boos of 5-year-old company Würkin Stiffs in Sarasota, Fla., which sells magnetic collar stays. His episode aired in late March.

Although Würkin Stiffs started as a specialty store find, sales are projected to top $1 million this year. But could Boos grow the company faster or further with a cash injection from the Sharks? Here's his 'Shark' tale:

Carol Tice: What was your pitch?
Jonathan Boos: I asked for $85,000 for a 10 percent stake in the company. I was going to say $200,000, but I started to listen to the others asking for that with no sales and the conversation immediately turned choppy. I didn't want to fight on set about my valuation. I didn't want to discuss numbers -- just the products I have coming out.

Tice: How did the Sharks respond?
Boos: Barbara Corcoran first said she was out, since it's mostly men's apparel. Mark Cuban and I really hit it off, but Daymond was quiet for a good 15 minutes. He had the apparel experience, and I felt he could help me the most. But his body language wasn't promising. I finally said: "When are you going to talk to me, Daymond?"

He got upset and said: "I was going to give you a deal, but now I'm not." Then all the Sharks started ganging up on him.

While in the waiting room, I could hear Kevin O'Leary say: "You should talk to him. This guy's the real deal." Barbara came back in. She offered $100,000 for 20 percent of the company. Then, Daymond came in and drove it up to a 40 percent stake -- and he wanted my wife to become the president of the company so he wouldn't have to talk to me.

Tice: What was the upshot?
Boos: That's the deal I did, $100,000 for 40 percent of my company. I just knew it was great television -- no one I've ever seen got a Shark mad at them and then swung it back in his favor and did any kind of deal.

Tice: What happens after the cameras stop rolling?
Boos: The next day, I just went back to work. I still have to figure out if I want to do the deal. Mark Cuban told me: "I think Daymond's your guy… if he can bring [Würkin Stiffs] to $50 million" in annual revenue. I agree with that, but 40 percent is a big chunk of equity to give up...so we'll see.

Either way, I think the exposure will be fantastic.

Tice: Got any other tips for pitching the Sharks?
Boos: If you have a conviction, stick with it. Just because the sharks have all the money doesn't mean they have all the answers. But don't say you know it all either. If you did, you wouldn't need their help.

Also, don't flop around -- a lot of guys start saying one thing, and then say the complete opposite just to agree with the shark. Instead, know what your business' weakness is and be up front about it.

Do you watch Shark Tank? Share your thoughts about the series in the comments below.