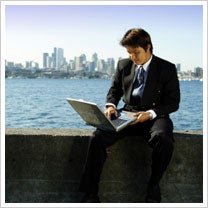 For starters, the New York technology community has great resources just for startup; such as Ultra Light Startups (recently referred to as Self-Help for Startups, by Businessweek), held at For Your Imagination, in Chelsea, Manhattan. The focus of Ultra Light Startups is on those starting a business and who want to connect with others who can either help them or collaborate on launching the business. There have been many a great idea pitched to a willing and helpful audience. Sometimes these pitches result in entrepreneurs connecting with venture capitalists looking for the next new businesses to invest in. Other times, people in the process of reinventing themselves -- due to the recession and job loss -- have found the next big thing, right there at Ultra Light Startups.
At The Hatchery, audiences watch while technology companies pitch their ideas to a panel, after which they receive priceless guidance and feedback from successful Entrepreneurs. Other similar events include the NextWeb | NY Web 2.0 Meetup, the SEMPO New York, Web2NewYork (New York Web Entrepreneurs) and the largest meet-up in NYC, the NY Tech Meetup. Many of the largest companies in the East Coast tech community, often present or ask for ideas and feedback, and occasionally, look to recruit programmers. Since many prominent New York entrepreneurs show up at the New York Tech Meetup, it's a good place to make a first connection for your business.

What do all these events have in common? Internet luminaries such as Gary Sharma, Jeff Pulver, Gary Vaynerchuk, Shelly Palmer, Fred Wilson of AVC.com attend, all at the ready to despence advice and offer other support to help you get your startup going.

So, between Social Media Breakfasts (Jeff Pulver and Social Media Club), the numerous meetups, and other social, entrepreneurial and educational events, New York has a rich fabric from with to launch any business, and that's what we were celebrating and fostering at Entrepreneur Week NYC.